In order to celebrate my Husband’s birthday this year – a big birthday – one with a  zero in it, we wanted to go somewhere special. There were several boxes that needed to be checked for this trip.
1) It had to be somewhere neither of us had been before.
2) We wanted a direct flight, regardless of duration of flight. We simply wanted to get on the plane, get off the plane and be there.
3) The biggest treat for him (and for me) would be to spend some time with with his family, so we wanted somewhere handy to Hong Kong.

Taiwan ticked all those boxes and more.

Apart from Hong Kong, I’ve seen nothing of the “Far East,” or I should say “Far West,” since that’s the direction you travel from San Jose.

Tapei, the capital city, is a 14-hour flight from San Francisco (SFO). We flew with EVA Air, a Taiwanese airline, and it was one of the most comfortable economy flights I’ve ever taken. The aircraft was clean, well staffed (the Taiwanese cabin crew were a preview of the wonderful people we would meet later on our trip) and the food was good.

The toilets had lots of nice little extras, such as moisturizing hand lotions and lavender face spritzers. It was the first time I’ve used misting sprays on a flight, and I really noticed the difference in that my skin and nose did not get as dry as it usually does in the harsh airplane AC.

As we disembarked, I found it hard to believe that fourteen hours of my life had just passed. The time had flown by (pun intended!) I’d watched 4 movies, started reading an excellent novel (The Snow Child – Eowyn Ivey), managed to snooze for a few hours (despite the mandatory screaming child on board) and had food carried to me while I sat and relaxed.

For flights this long, its’ a good idea to bring some snacks of your own. The airline did provide crackers the whole way, but I did hanker for more tasty treats.

We landed in Taipei late, and it was nearly midnight by the time we’d gotten our bags and headed to the taxi rank. The taxi from the airport cost T$1200 ($40) for a 40min ride. We’d photocopied and enlarged the name of our hotel so that it was easy to read and we didn’t have any linguistic problems. This approach worked well.

The first thing we noticed about Taipei when planning our trip was what great value the hotels were. We paid the same for a 5-star hotel in Taipei as we’d pay for a 3-star in big cities or holiday hot-spots in  the USA.

We chose the Sheraton Taipei (as you do!) and we weren’t sorry. The room was lovely, equipped with everything you could want. The bed and pillows totally zonk-out inducing. But the best thing was the loo. Yes, you read that correctly -the loo, john, jacks, bog, toilet – call it what you will, was totally teched up. What a treat for my nerdy Husband!

The seat was plugged in to a box on the wall and for a few minutes my husband had me convinced that it was hooked up to the internet until I asked , “Why would it be online?”

That said, it had lots of party tricks. This was more than just a toilet. The seat was heated, like, all the time and not just after someone else had warmed it up for you. It took some getting used to – odor-free warmth! 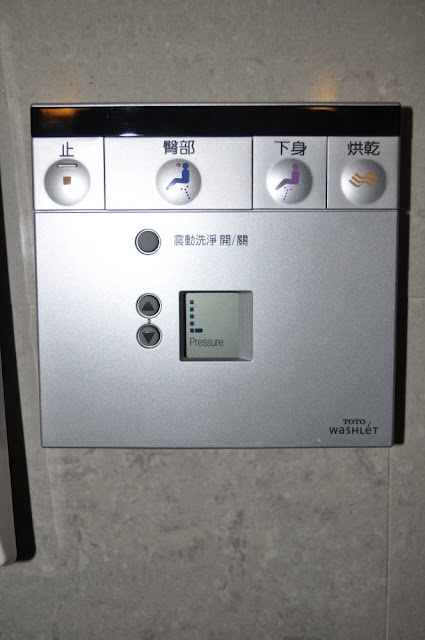 There were water jets to clean your nether regions, with special buttons for jets especially designed for each gender. The coup-de-ta, a blast of air to dry you off – seriously! (Button on the far right.)

Next morning we went to breakfast, safe in the knowledge that everyone had nice clean bums (let’s face it, who wasn’t going to play with their toilet, right?)

Clean bums aside, it was the best breakfast buffet I have ever come across – period. There were at least five different cuisines at play from French bakery pastries and croissants, with dozens of choices, to Japanese, Chinese, western fry-ups and an excellent fruit station. I helped myself to mizo soup, a boiled egg, bbq pork steamed buns (my favorite dim sum item), French crusty bread liberally smeared with nutella, green tea muffins…in short, a smorgasbord of international treats!

This set the food tone for the rest of the trip. Taiwan has it all cuisine wise, and it is a great destination for foodies. The bakery shop displays alone were enough to make me salivate. 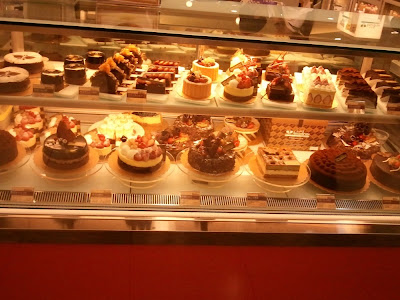 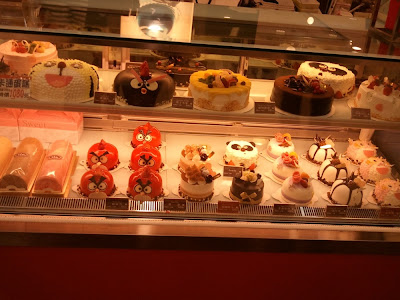 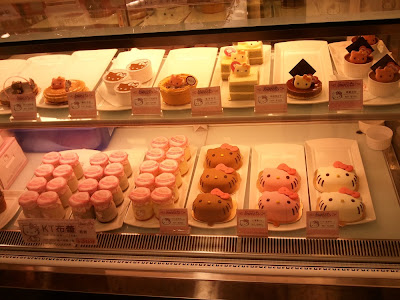 The Taiwanese people themselves are such wonderful hosts. They made us feel welcome and managed to communicate with us even when we didn’t have a common language – they speak Mandarin, my Husband speaks Cantonese and English, and I’m a one-lingo-wonder! I was completely humbled by how genuinely nice and helpful the Taiwanese were.

If we looked lost at all there was always someone who’d say, “Can I help you?” And said in such as way as to give you space so you didn’t feel like you’d just walked into an up-market boutique without enough money, or make you reach for your purse in case they’d want paid for their services!

This truly lovely nation made us feel comfortable, welcome and relaxed all week, and I can’t wait to tell you all about it. If you are contemplating a trip to Asia, think Taiwan – it has it all!

Over the next couple of posts, I will tell you about the sights of Taipei, and the wonders of the beautiful Taroko Gorge on the East Coast. Just a snippet of what Taiwan has to offer. And to paraphrase Arny – We’ll be back!

I hope I’ve whetted your appetites for more!

3 replies to Taiwan – a tasty treat!