Last year, I posted about who St. Patrick was for the 17th March. Seeing as it’s St. Patricks day this week, and this is a gardening blog, I decided to tell you all about our national symbol – the Shamrock.  What a devastating afternoon of research it’s been!
First of all I wanted to be able to tell you what the scientific name of shamrock was.  I was horrified to discover that we don’t really know. Seemingly it’s any of the following plants:
Medicago lupulina – Nope, I’m not convinced – the leaves look too crowded in the picture I found on Wikipedia and it’s altogether too big and stringy. I’m just going to ignore this one – management decision!
Oxalis acetosella  – now this looks very like the shamrocks I learned to draw in school – three little hearts joined together, but when we were kids we used to eat this. Not for dinner, as such, but my Mum showed us how we could nibble on the leaves and let the sour, yet appealing taste of the plant she called cuckoo sorrel, twang our taste buds.  Every St Patrick’s Day, the Irish Cardinal would say a solemn blessing over the shamrocks, outside the Cathedral, as we Girl Guides stood shivering in our uniforms having paraded through the city to Mass. These shamrocks were handed out to us to wear, but they weren’t anything remotely edible.
Clover (Trifolium repens ) – even though I’ve spent my entire life telling non-Irish people that shamrock is different to clover, this looks more like the one we had pinned to our lapels with straight pins that jagged you in the chest every time you moved. Clover has different shaped leaves to the Sorrel (Oxalis).  I want it to be the clover because clover is much more gardener friendly, and I hate the noxious oxalis they have here.  Here’s a diagram of the different shape of the leaves.

Also the word Shamrock (seamróg in Irish) is derived from the word seamair which means clover. So I’m pronouncing the Trifolium repens as Shamrock – that’s what it was in our house (I think!). And it is backed up by a study The Shamrock : A Further attempt to fix its species by Nathaniel Colgan published in the Irish Naturalist 1893.
Last week a kind of spooky thing happened. A patch of clover sprang up on our lawn in the shape of the map of Ireland! Here’s a map of Ireland taken from Google maps for reference. 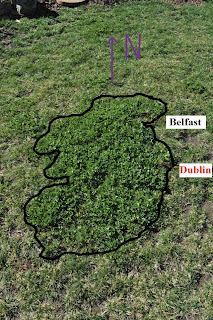 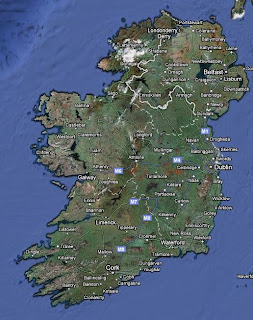 Admittedly, its not the Trifolium repens, – it’s the hateful bur clover that is a horrible weed, and I spent Saturday weeding it out.  St Patrick’s Day or no, I didn’t want those buggers putting out seed, and the flowers were about to blossom.
That said – what’s the deal with Shamrocks and Ireland?  Well, it’s all St Patrick’s doing.  He picked up the Shamrock to teach the pagans about the Holy Trinity, saying how it was one leaf, yet three. His botany didn’t seem to be up to much because really it has three leaflets and one leaf – but obviously he studied Religious Education more than Biology!
Then, shock, horror! The Wikipedia entry on “Shamrock” says that there’s no evidence to support that St Patrick really did do this. As if millions of Irishmen stating it all down the millennium wasn’t enough… Good job I didn’t rely solely on Wikipedia to write this post!
Also, it seems that the Irish Government has registered the symbol of the shamrock as a trademark. I not sure how that works – it’s not as if they copywrited a leaf! I guess it means that no other country can muscle in on some Shamrock action!
Though there is probably no need for that, if you consider how the Shamrock has always been associated with Irish Nationalism down the ages.  Interestingly though, a four leafed shamrock, aka clover, is an extremely rare mutation and is considered very lucky. Luck and Irish Nationalism centered around the same plant – now that’s an oxymoran if ever I heard one!
And so you drown your shamrock on St Patrick’s Day with a big pint of Guinness and toast to the man himself. Even though a crappy botanist, he sure did plenty of other good stuff for the nation, and for that we applaud him. Here’s to you St Patrick, thanks for coming back and giving us the wee shamrock-clover-oxalis thingy!
And if you are drowning your shamrock (and of course you are) remember to drink irresponsibly; it is St Patrick’s Day after all!
Byddi Lee
Filed Under : Armagh, Catherdral, four -leaf clover, Shamrock. Saint Patrick

3 replies to Drowning the Shamrock