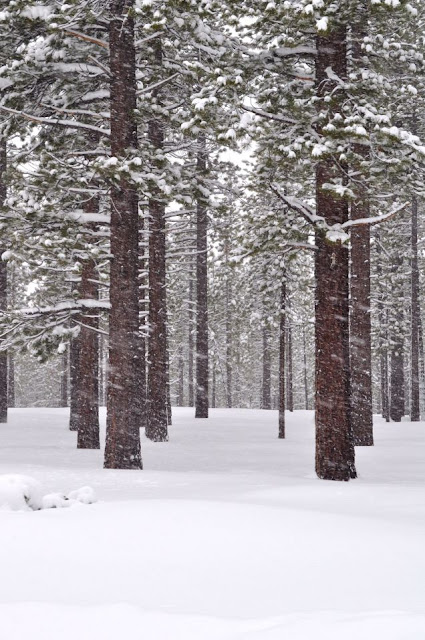 Even after a fifteen and a half hour car journey from hell, I have to say that I still think snow is beautiful,  especially when you can drive out of it to the warmer weather. Not so the case for the ill fated Donner Party in the winter of 1846/1947. But more about that in a minute…

This winter has been epic in terms of snowfall in the Sierras, and happily it coincided with the first year that we bit the bullet and bought a season pass. The pass covered us for Heavenly, Sierra-At-Tahoe and Northstar.  It’s hard not to compare resorts, and it’s even harder to compare resorts with Heavenly and find them to be better.  This past weekend we traveled north of Lake Tahoe and skied Northstar, having been to the other two a few times this season already, and basically, because we could!

So how did Northstar compare to Heavenly? Comparing it to Sierra-At-Tahoe doesn’t happen – the latter is far smaller, much less polished and also much less expensive if you are buying day tickets.  A day ticket at Northstar costs roughly the same as one at Heavenly (this year $88).

Northstar is fabulous if you have buckets of money and stay in the über-expensive Village at Northstar.  Here you can get ski-in/ski-out accommodations at a hefty price.  The village is purpose built and as such lacks soul, though it does make up for that in expensive shops and eateries.  There is an ice rink and fire-pits at the base of the gondola.

The thing I hate about Northstar is that you have to drive to a car park then take a shuttle from the car park to the village where the shuttle drops you at the furthermost end of the village form the ski-lifts, so you have to carry your skis all the way through the village.   For a price of $49 you can get valet parking at Northstar … reinforcing the theme “A great place of you can pay for it”!

At Heavenly you have a choice of  four places to access the mountain, three of which have free parking right at the lifts. In South Lake Tahoe there is a wider price range of accommodations and restaurants to choose from too, so overall, easier on the pocket.

Northstar doesn’t have the views that you get with Heavenly. There is a peek of the lake, but it does have plenty of great runs.  When we were there, the snow was amazing. It began to snow on Friday as we were skiing, and it hasn’t stopped yet – a week later and counting!

On Saturday morning we had to dig the car out of the snow. I’ve never seen so much snow fall so quickly! I was worried that we had forgotten where we had parked, (I do that often!) and that we’d end up digging out the wrong car.

That day’s skiing was just fantastic – powder snow up to my waist. A hilarious face-plant lay testimony to my continued inability to ski powder properly! Sunday morning we had to dig the car out again. This is the view from our hotel room. (Sorry, phone camera = poor quality shot!)

More worryingly was the news that Interstate 80 was closed due to heavy snow and zero viability.  We both had engagements the next day and had to get home – plus the snow was on for the week so postponing our homeward trip was not really an option.

Thus started a day of bad decisions…We decided to head for South Lake Tahoe and try to get out on route 50.  Highway 89 was closed just north west of South Lake, so we took route 28 down the eastern side of Lake Tahoe. Traffic conditions were scary. 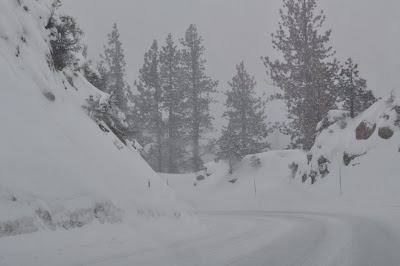 It took us an hour and a half to get to South Lake, where we stopped for lunch. Bad decision number 2!

The service at lunch was slow, but after an hour we were back on the road.  We decided to take Pioneer Trail out of the ski town and get onto Route 50 from there. It’s a short cut, of sorts.  Already, the Sunday exodus traffic was backing up from the lights at the intersection. As we sat watching the snow fill up the landscape we kept checking the road conditions via my husbands laptop and the magic of technology supplied by his aircard that linked us to the internet. 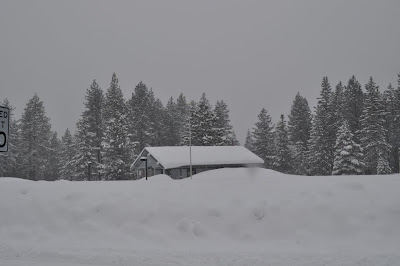 I wouldn’t want to be digging out this guy’s driveway!

After sitting in traffic for about two more hours the road condition information changed to “Traffic held” on route 50 due to avalanche danger. Traffic held? What did that mean? Was the road closed, and if so why didn’t they just say closed?  I scanned twitter but couldn’t find anything helpful.  And of course the highway information was now telling us that Interstate 80, an hour and a half away, where we’d first started, was now open – arrrrrrrrrrrgh!

We hoped that they were relying on bigger machines than this one to clear the road! 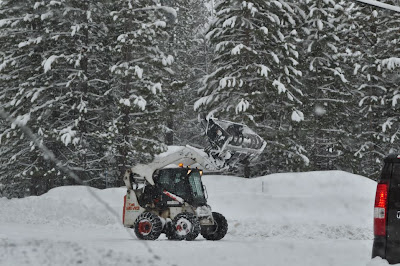 It was getting too dark to take many more photos. 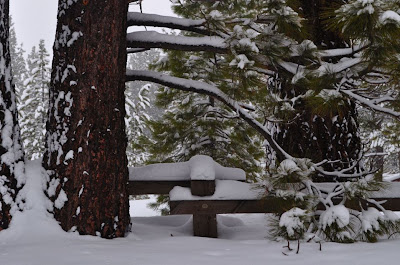 I’d often heard mention of the Donner Party who had been stranded in the Donner Pass – where Interstate 80 is built. So as we sat in the car, I googled it, reading aloud to my husband as he “drove.”

Sitting looking at the storm from the car it was easy to imagine the scenario of a group of people being stranded by a huge fall of snow in this region. 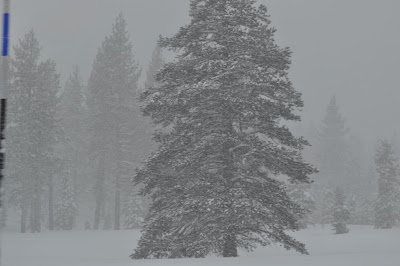 What was more disturbing was the accounts of how they resorted to cannibalism to survive.  Morbid fascination kept me reading, but it was very disturbing. Not that I have a problem with the fact that they ate human flesh – if the other people were already dead then, sure, it was the most sensible thing to do – just like the plane that went down in the Andes, and they ate the dead passengers as told in the Movie Alive. That’s what I think I would do rather than choose death.  But what really chilled (pardon the pun!) me was that some accounts reported that people were overheard to be plotting to kill others to eat them!  In another description of events a man was said to have a preference for tender flesh from children and was accused of killing kids for food!

In our car, I reckon I had the raw end of the deal.  There is considerably more meat on me than there is on my husband – in fact I had a chew bar in my handbag with more calories in it than I figured I would glean from my better half!

Fortunately, the traffic began to move more quickly, and hungry as we were, we survived on chew bars until we made it home at 4am.

But the whole episode left me thinking….
Wouldn’t the Donner Party have been been better to keep moving rather than stop even if it was just a mile a day?  They were so close to help.

And more importantly – what is really in a Donner Kebab?

6 replies to Stopping by woods on a snowy evening