It’s a one hour flight from Christchurch to Auckland in the North Island. Waitomo is only two hours south of Auckland by car so we were able to comfortably push on through to Waitamo without having to spend a night in Auckland.

We stayed in the delightful Waitomo Caves Hotel and soaked in the charm of the lavish yet somewhat jaded decor that spoke of an older era, whilst trying to push The Shining to the back of our minds! 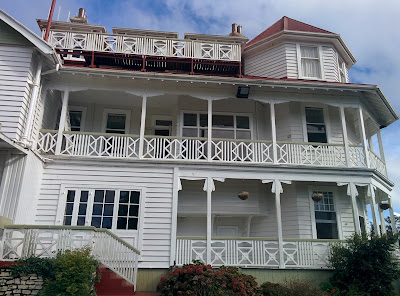 No need to worry though. 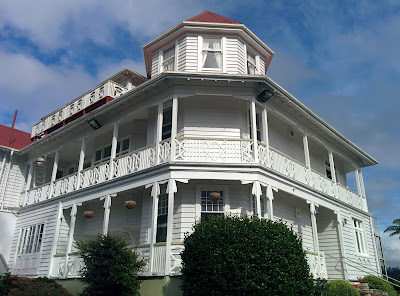 The hotel had a warm, welcoming atmosphere, with friendly staff and a great restaurant. 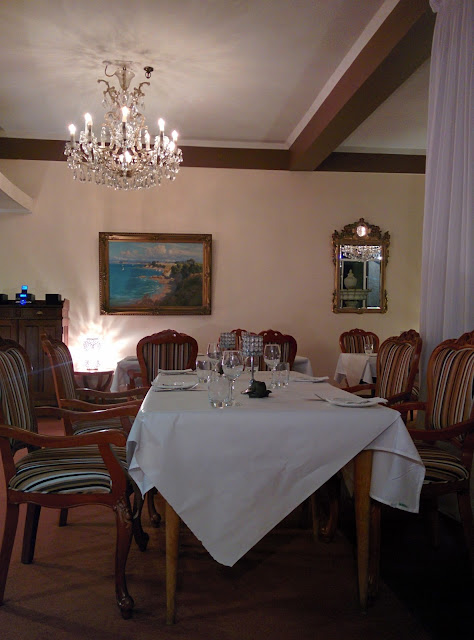 The waitress took time out to chat with us. She was a local Maori woman and her insights to the area and local life were interesting and much appreciated.

Next morning, we spent some time at the Otorohanga Kiwi House. 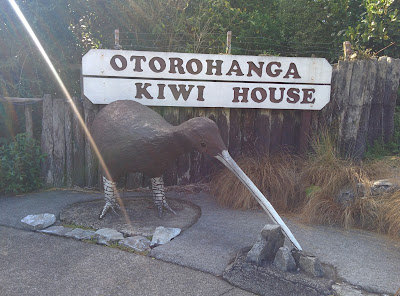 They have more than just kiwis, such as this Kingfisher. 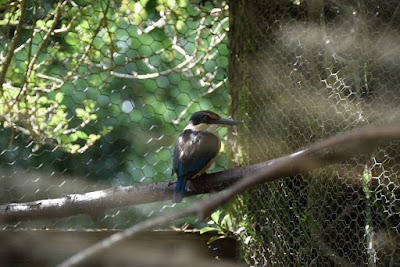 We were able to watch feeding time for this cute Kea. 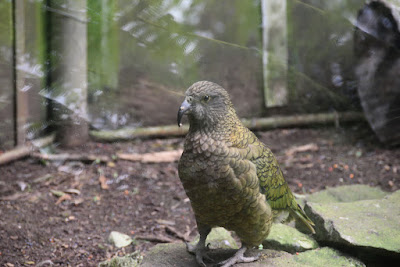 These adorable parakeets, the Red-Crowned Kakariki, were so entertaining. 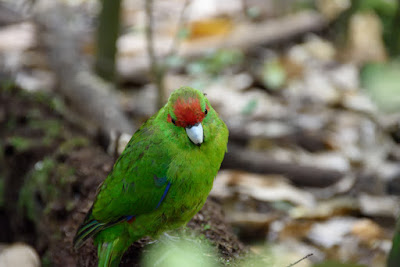 But my favorite was Kevin the Kiwi! 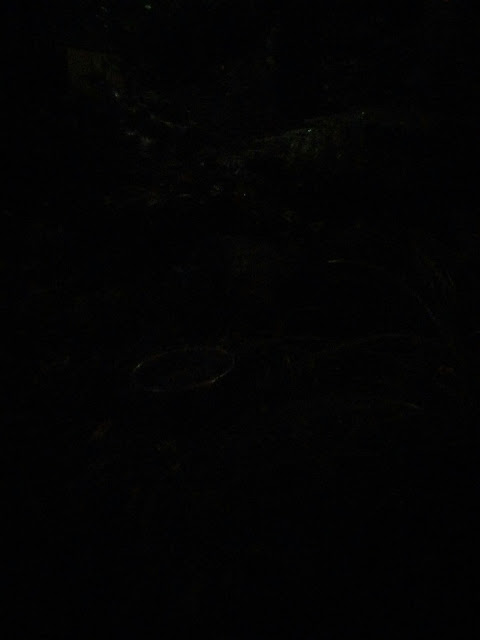 It’s hard to determine if he’s a Brown, Little Spotted or Great Spotted Kiwi from this photo. Trust me, he’s there, but what do you expect what with trying to photograph a nocturnal bird in the dark?

The afternoon was spend below ground despite the gorgeous scenery above. 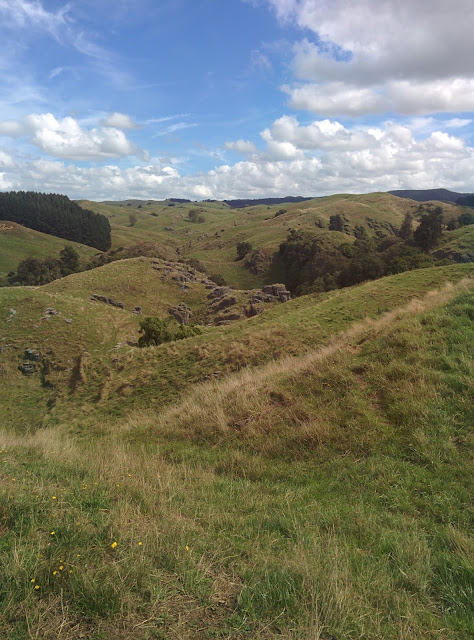 We were visiting glow worms caves. We’d seen glow worms already on our trip but years ago on my first visit I’d been blown away by these cave tours and I wanted to share that with My Husband.

There are many tours available. The cheapest tour is about NZ$50, but if you can budget for it, I highly recommend the trip run by Spellbound Tours for NZ$75. The groups are smaller, the tour is longer and you feel like you are having a private tour of the caves because they take you to a different, less busy section. Our tour guide was one of the cavers who had first explored the cave system. His stories about how he and his friends had set up the first tours and developed the pathways were great. He totally plugged into our geek-factor on the science and technology behind it all.

The tour begin with a walk through the caves. We were all given helmets and head lamps. At various points we were instructed to turn off the lights to feel the developing darkness that only underground caves can offer.

Then in one cave little pin-pricks of light showed up. 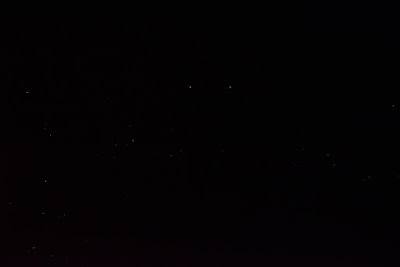 These were the start of the glow worms…just the start… Now, I know this is nearly as good as my “Kevin the Kiwi” picture but bear with me – it gets better!

Here’s what they looked like with the lights on. 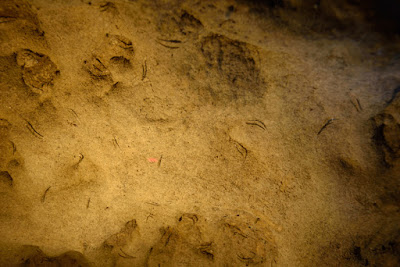 And from another angle you can see the sticky threads with which they capture their prey. 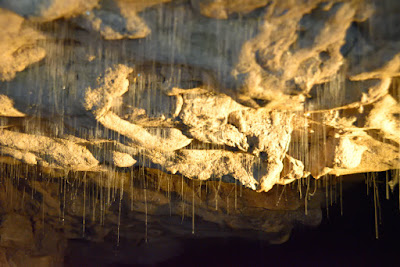 We then came to an underground river. We boarded the awaiting boat and were instructed to turn off our head lamps.

Above us the ceiling twinkled with millions of tiny lights which were reflected in the water giving the impression that we were floating through stars.

It was amazing. To complete the zen of the experience we were asked not to talk or use any photography at all. Free of charge, the company provided us with a set of stunning photographs of what we were seeing.

They gave me permission to use them in the blog – good job too because I am running out of words like amazing, spectacular, magical, stunning… to describe what that experience was like. It was like being in another dimension, floating along in that boat, holding My Husbands hand and devouring this visual feast.

When we were allowed to turn our camera on again, we did manage to snag a few nice shots ourselves. 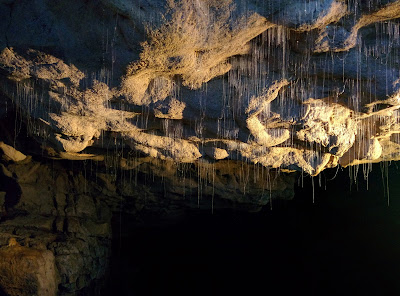 We came across the remains of a goat. It may have stumbled in from outside to die. 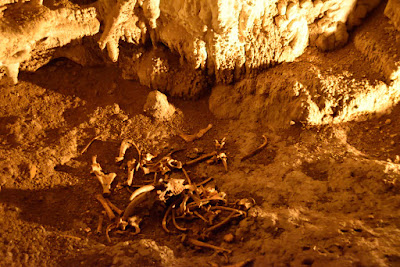 Other strange bones were too far in for that to be the cause of death. This fatality may have been the result of the animal falling in through a pothole. 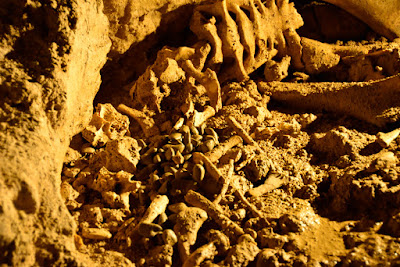 The picture above shows bones from a Moa – a giant flightless bird which is now extinct.

This toe is about six inches long. 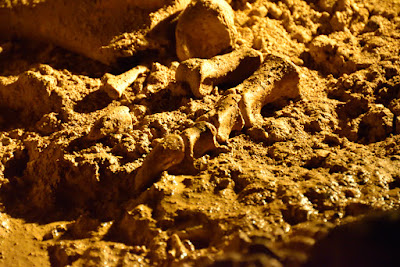 The Spellbound tour truly lived up to its name. We had a great time with these guys and would urge fellow travelers to this area to look them up.

I’ve visited caves all over the world and these are the most unique, interesting and bewitching of them all.