Every time I look at my native plant garden, something about it thrills me. It’s provided blossom all year long. At this time of year plants struggle to survive. Heat is at its all time high and water at its all time low, yet there are colorful blossoms bravely swaying in the blistering heat.

My tiny desert willow, Chilopsis linearis, suddenly sprung up overnight and has produced the most beautiful flowers. 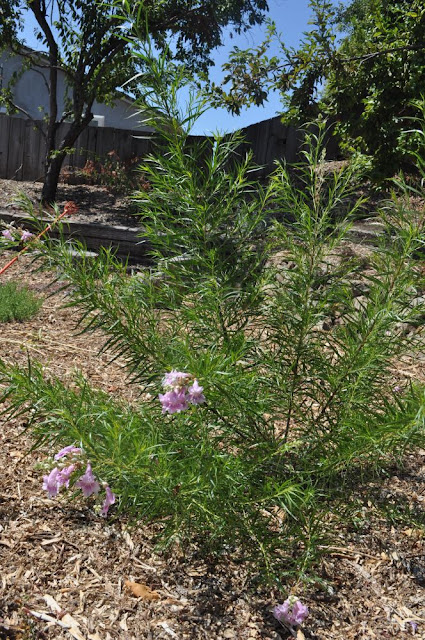 This will get bigger and flower more prolifically as the years go on.

Thankfully the mystery “might be deer grass” plant did turn out to be deer grass, Muhlenbergia rigens. In the foreground sits my Cleveland sage, Salvia clevelandii, and off to the left, the showy milk weed, Asclepias speciosa. 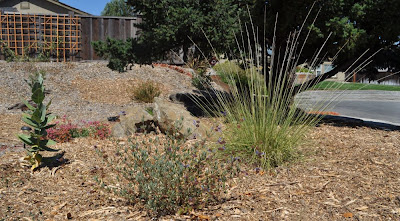 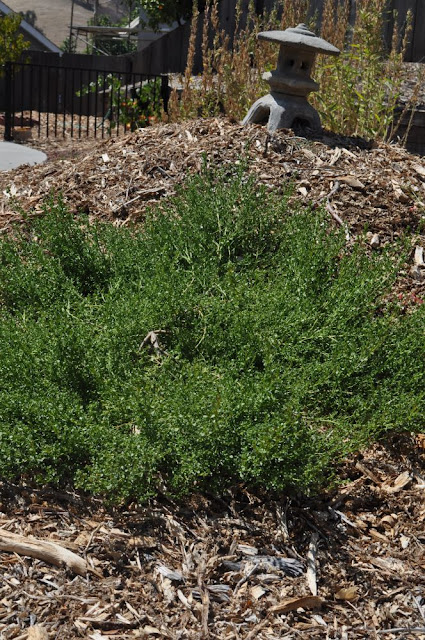 Also from humble beginnings, blue flax, Linum lewisii, seeds I saved from the Native Garden at Lake Cunningham are getting established. No flowers as yet, but the foliage is pretty. 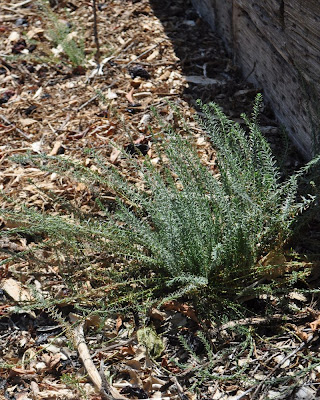 By extreme contrast rosey buckwheat, Eriogonium grande rubescens, has performed away beyond my expectations. 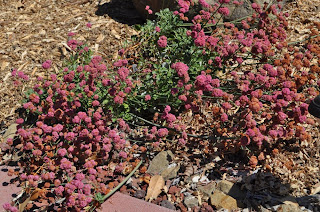 I’ve no objection to this running rampant in the garden. I planted each native with lots of room around it so that it would fill in. I anticipate plants starting to run into one another after at least three years. I know for sure that will happen with the lively and vibrant California fuchsia, Epilobium canum, only planted a month ago – the worst time for planting out, and it’s as happy as can be! It even squeezed out a couple of flowers for me. 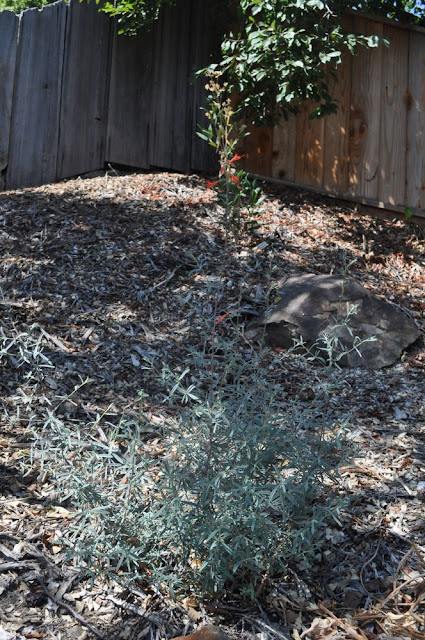 Chosen more for scent than scenery, the California sagebrush, Artemisia californica, often referred to as cowboy cologne, has become a favorite as much for its lovely smell as for the grey green foliage it sports. This one is a prostrate form and makes a great filler in the foreground. 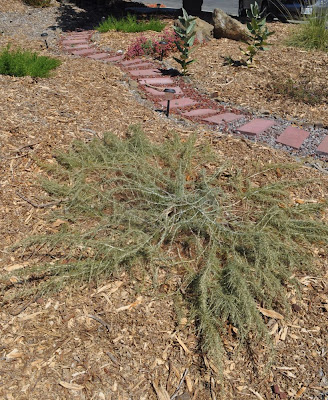 The Rodgers red grape, Vitis californica, even produced fruit – mind you I wouldn’t hold my breath waiting to get drunk on wine from this crop. Here is the yield in its entirety! 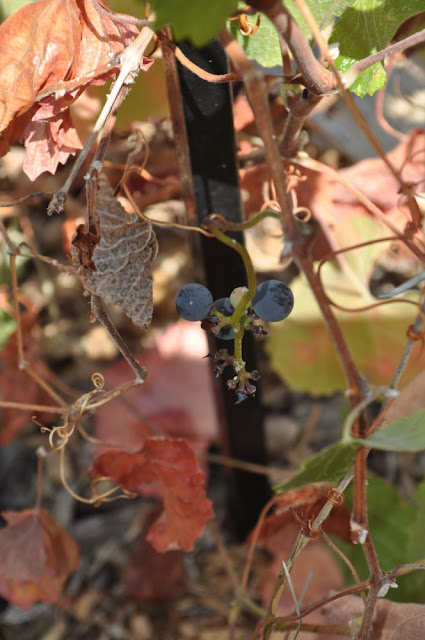 Some dastardly critter got there before us. And I think the picture makes the grapes look larger than they actually were!
The hardest part of native gardening to date has been cutting back the plants that need it. One reason for doing this is to cut off the old seed heads. The scarlet penstemon, Penstemon triflorus  has finished flowering and you can see what would be next years plant growing already at it’s base. I left the cut seedheads and foliage were they fell to add to the seed bank and mulch – recycling at its best. 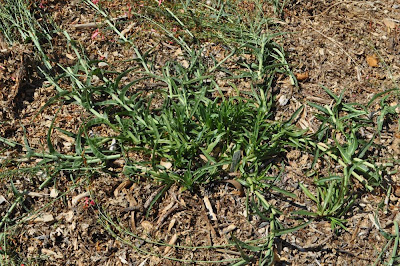 Another reason to cutback plants is to try to avoid bushes becoming straggly. My coyote mint, Monardella villosa,  had blossomed beautifully, full round purple flower heads that smelled devine. But the branches fell open and the bush simply looked wanton! 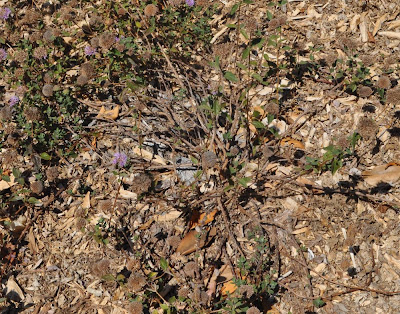 So I decided to prune it back. It’s a cringe-worthy job. I felt like I was killing the poor shrub, but my biology head kept telling me it was for the best. It just seems so counter-intuitive to cut bits off the plant when you’ve been watching it grow all year. I cut back quite savagely to the first green leaves coming up from the roots. Why does this work?
If you don’t want to read the science part (or rather “science as seen by Byddi” part) skip the next paragraph and go back to looking at the pretty pictures!
Plants have growth hormones called auxins. They are secreted by the growing points. There are several growing points in a plant, but for this explanation we are only concerned with two – the growing point at the tip of the shoot (apical meristem) and the growing point along the stem (lateral meristem) where leaves or branches can grow. To remember the word “meristem” think of the words “merry- stem” – as in it’s “merry” to reproduce! In high concentrations the auxins make the cells of the tip divide to make more cells, hence the plant grows. However, in lower concentrations the auxin inhibits cell division. The auxins from the tip “drip” down through the stem becoming increasingly dilute, so that the lateral growing points are inhibited. If the tip is removed, the auxin stops and the lateral meristems jump into auxin-producing-action. The concentrations of auxin increase in these localized areas and cell division is ignited, resulting in the growth of side shoots.
Hope that hasn’t hurt your brain too much! And for you non-scientists, it’s safe to read on…
The problem with cutting back the Hookers evening primrose, Oenothera hookeri, is that there were absolutely no growth buds apparent down low. The whole plant looked terrible and obviously had to be cut somehow. 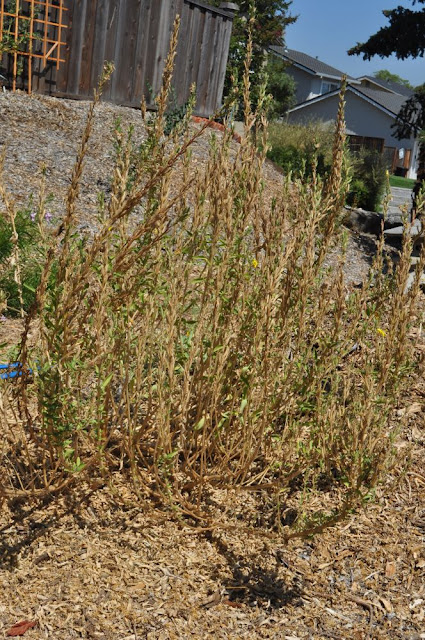 All the research I did recommended it be cut back right to the ground. In a giant leap of faith I did just that. 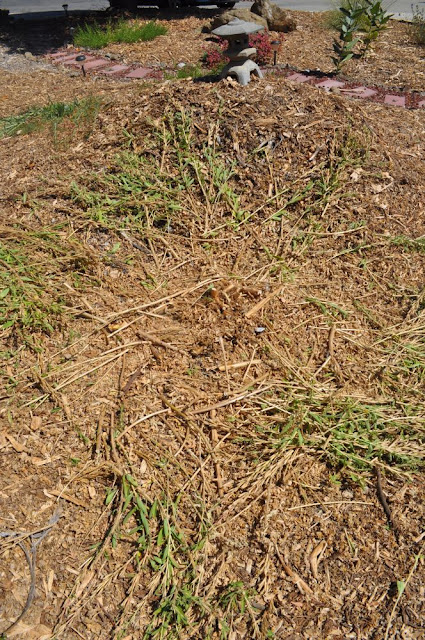 As I was cutting I was heartened by the fact that I was being literally showered by seeds. If the mother plant doesn’t make it, hopefully new seedlings will take its place. I’ve read that Hookers evening primrose is a “moderate” re-seeder – but that could mean anything!

Again, I left all the cuttings where they fell. I can’t decide if that was my biology head or my lazy head talking! 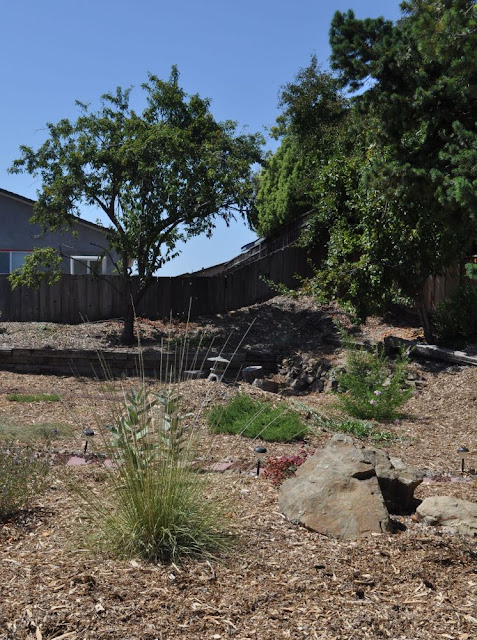 3 replies to It’s all about the cut-backs