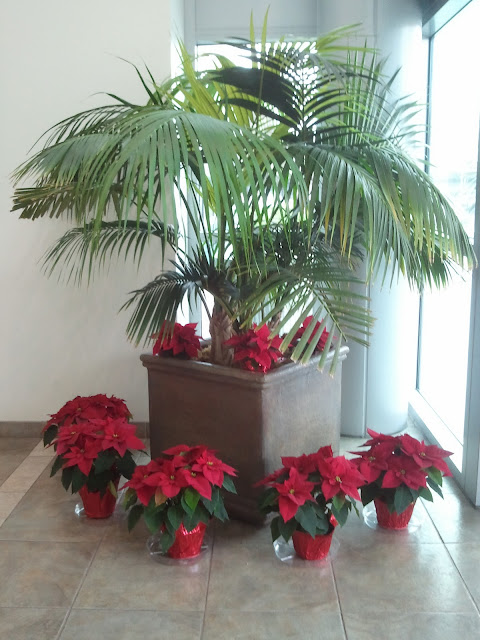 Once upon a time, a poor Mexican girl called Pepita walked with her cousin, Pedro, to the Christmas Eve Services.  She was sad and upset that she had no gift for the Baby Jesus.
“Don’t be sad,” said Pedro. “Even the most simple of gifts will be acceptable.” (Why do men always think this in general?)  And so Pepita stopped by the side of the road, gathered an armful of weeds and arranged them into a bouquet.
When they got to the church, she laid the weeds by the manger and they blossomed into flaming red flowers. Everyone who saw them exclaimed at their beauty, saying it must be a Christmas miracle – instead of photoperiodism!

And another thing – those aren’t red flowers. They are modified leaves, or bracts to be exact.  The flowers are really quite tiny and nondescript. 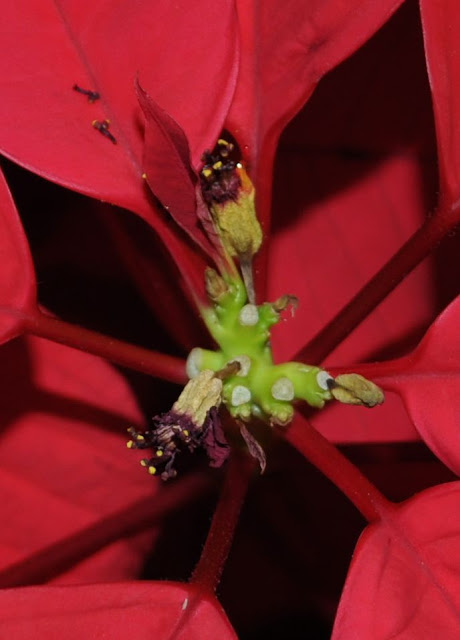 But apart from that, it is a sweet story, and it is lovely to see Poinsettias, Euphorbia pulcherrima, a native of Mexico,  in their full glory at Christmas time.  The star-shaped leaf pattern symbolizes the Star of Bethlehem and the crimson red, the blood of the crucifixion.

A couple of years ago, my Mum bought us a Poinsettia.  She drummed home the message (as only Irish mothers can) that I was to keep it out of drafts and not let it get direct sun or extremes of temperature, and water it – but not too much.

As only Irish daughters can, I ignored her, and set it by our patio doors and promptly forgot about it in the Christmas fuss so that it dried out. In the nick of time, I hastily watered it  Thus followed the second Poinsettia related Christmas miracle – it didn’t die!  In fact, it grew and it grew, until by May it was a three-foot-high green leafy shrub.

In June we moved house.  The Poinsettia tree was accidentally left outside in the full glare of the Californian June sun as we renovated the house. Some of the leaves suffered sunburn, but I cut those off and back it came even stronger.  Was it another miracle? Or just a happy coincidence that that was roughly around the correct time to prune the shrub – a fact I found out only recently.

By September, we were immensely proud of the plant lasting nearly a whole year, especially given that my Mum had reckoned I would kill it within a month! I looked up how to get it to turn red again.

At the start of October, the Poinsettia needs to be placed in a dark (completely light free) cupboard at night (take it out during the day as it still needs to photosynthesize) for at least ten weeks.  There are month by month care instructions at this website.

I was all set to do this when I noticed the leaves begin to drop.  Was it too little water?  I had just fertilized it… Then I spotted the problem – SCALE!  Overnight, it had become infested with a gross, yellowy scale and we were all out of miracles.  We were really sad to have to send our poor little (former) survivor to the bin… not even the compost bin, for fear of spreading the evil plague that had visited upon our household!

So, last November, my Mum bought us another Pointsettia.

“Keep it away from drafts…”

“And no high temperatures…” (What happens in Mexico, though, don’t they have heat and drafts?)

“And keep it moist…”

“But not too moist, they don’t like their feet wet…” (She tells me this about EVERY plant, then over-waters everything when she visits as it’s warmer here than Ireland, and she decides that the plants will be thirstier.)

“And inspect it every day in case it gets covered in those scale things.  Now, that’s really important…you know what happened last time…”

And really you have to agree – when it comes down to it, Mother knows best.  Let’s hope this one makes it to next Christmas! 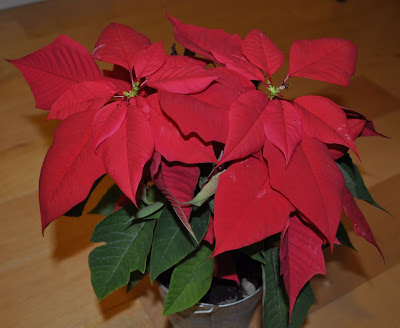 Before I sign off I’m going to hook into May Dreams Garden in the hopes that my poinsettias qualify for January’s Garden Bloggers Bloomday!