When your major competitor is a slug, it makes you wonder at your status in the universe!  Such is my obsession with the slugs in my garden that my friend, Haile, from sent me a book “50 Ways to Kill a Slug”!  The book has some great suggestions – Haile book-marked her favorite – hanging them on the clothes line to dry!  She so gets it – as a fellow gardener, she too hates the wee monsters.
Another friend, who does not garden, innocently asked me the other day “Just how much damage can they do?”  She figures they are small and slow, so what’s the big deal.  When she looks outside and sees a yard full of green plants, she thinks there’s plenty to go around.  The thing is, these creatures target the fresh, newly germinated seedlings – I’ve lost two entire crops of peas to these slimy creeps.  Remember my pictures celebrating the onset of spring, Springtime – a Myriad of Miracles?  Two days later, my newly germinated peas – all gone!  Enough to bring a grown woman to tears, I decided not just to get mad – I got even.  I declared full on war and brought in the Sluggo, recommended by Master Gardeners as an organic means of slug control.  They were using up too much beer (the slugs, not the Master Gardeners) and this was more deadly.
By standards, it’s been a wet spring, ideal for slugs.  Even with regular use of Sluggo there are still innocent casualties – My new lettuce patch took a direct hit. 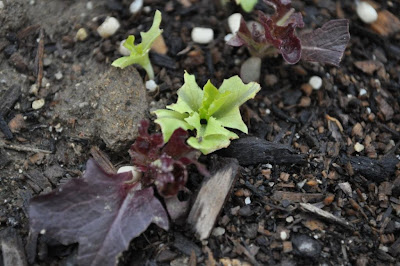 Then, I decided to try to start some peas indoors.  I called in to have a look at a new Lowes hardware store opened nearby and discovered that they had super cheap potting soil – 2 cubic feet for $5.  I bought two bags and went home and planted up a set of seeds, peas , beans, bok choi and, turnip to name a few.  Three weeks later the pots smelt funny, nothing had germinated and I discovered that the seeds had all rotted.  I had ignored the first lesson on my gardening course – if you have $1 to spend on your garden use 90cents of it on your soil – or something to that effect.  This soil was so bad that the only thing that did grow out of it was mushrooms!  I was able to use it to pot up some tomato seedling which, in my great enthusiasm, I started in January.  They are growing well in my sun room that is fast becoming a greenhouse.  You can see the stem behind the mushrooms. 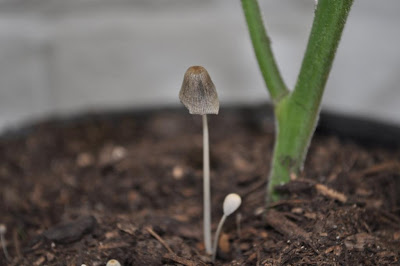 Once I switched to Sluggo, I felt more confident about direct planting my peas and beans.  The peas are going strong and the first bean poked its head up this morning!  Unfortunately, the weeds are more in focus than the bean! 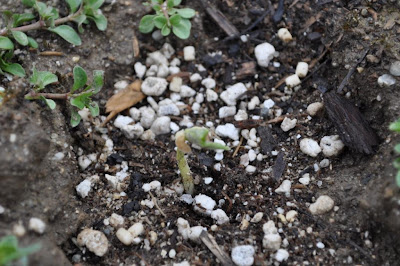 In fact, I’d been all set to write a piece about gardening disasters.  With the cooler temperatures this week, the garden had slowed up.  When I did my morning walk about – I love that first walk in the garden each morning to see what the new day brings – I was surprised to see a few new things up.  It washed away my gardening blues, and I realized that, really, I had only three ‘disasters” and none of them that much to write home about:-
1) The slugs eating ALL my new peas before I introduced Sluggo.  I felt let down by the beer!  A new experience for an Irish girl.
2) The cheap soil rotting all my seeds – all my own penny pinching fault!
3) Something digging up my newly planted sunflower seeds!  I can’t blame the slugs this time – they have no arms for digging.  My guess is either a bird, which technically doesn’t have arms either, but boy can they scrape with their feet, or a squirrel that seems to be stalking me in the garden.  It’s very bizarre, but he will sit only feet away from me watching me, probably waiting for me to plant more seeds for him to feast on.  Each time I stand up he runs to the relative safety of the fence and sits peeking over it at me. 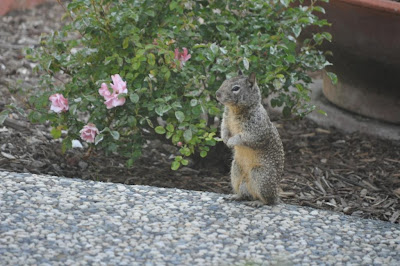 Perhaps he recognizes me as a former member if the Tufty Club. Though I’m not sure they let grey squirrels join.  Mind you, I can’t see why not as they did let Willy Weasel join!  I wondered was that still going these days – a road safety campaign aimed at children in Britain and Ireland- and of course, why wonder when you have a choice of search engines? Some of the sites are hilarious – if you were also a member of the Tufty club please leave me a comment!

I planted a row of sunflowers, about thirty seeds in total, along the back fence.  I am just imagining a wall of giant flowers come summer.  A beautiful wall of flowers – with a gap now!  To remedy this I planted more seeds in pots to fill in the gaps. 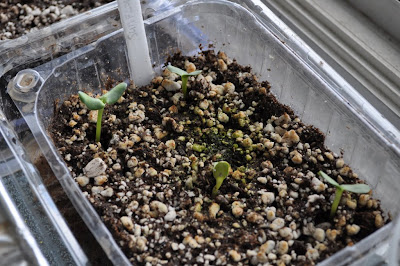 So far only three seeds outside have germinated – my “wall” is starting to materialize as a mere bunch!   Can you spot the Sluggo? 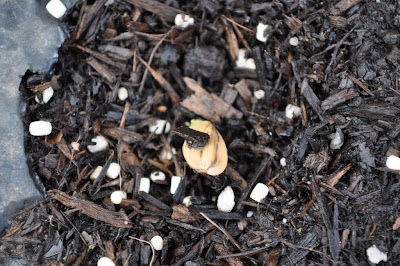 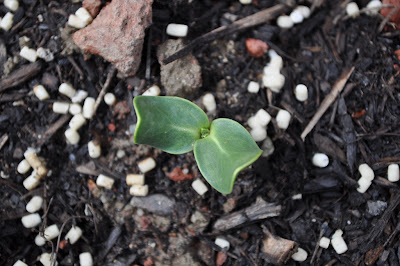 It has been unseasonably cool here, so there is still time for the other seeds to come up.  Hopefully, I will have enough indoor started seedlings to fill in any other gaps.  I hope it works – It should look fabulous.
Sunflowers were the last thing I bought my father before he died.  I sent him a bunch when he went into the hospice for the last time.  I thought they engendered hope, and it being the start of April a look forward to summer.  We thought we’d have him for the summer at least, but we didn’t.  He kept the sunflowers in a vase on the window sill of his hospice room and you could see them from the car park when you arrived in to visit.  It was if he were smiling out a welcome.  His second anniversary was on April 10th.  I miss him.
The sunflowers weren’t the only things to germinate over night.  We now have watermelon, zucchini and eggplant!  I love how the Americans call this “eggplant “– so much easier to spell than “aubergine”.  Though I do wonder, do they describe the color aubergine as “egg plant”? 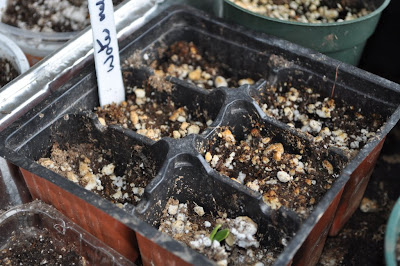 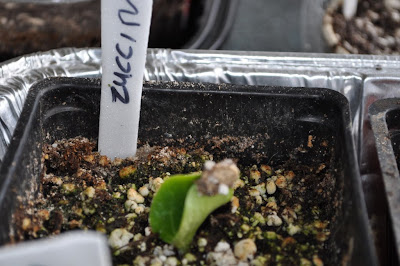 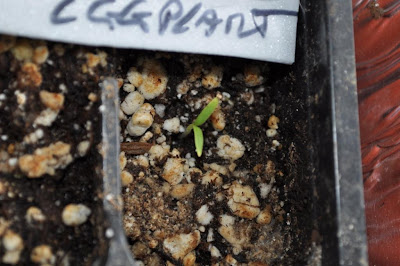 I love the way potatoes first come up – they are like little velvety green roses nestled in the soil. 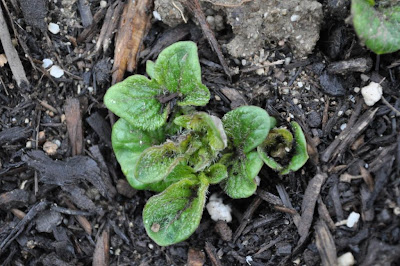 And to totally evaporate the disappointment of my three minor disasters, one of my plants came back from the dead!  Last October, I bought two gogi berry plants.  One died pretty much straight away, and the other one ‘died’ at the end of November.  Or at least I thought it had died, but hurray – it came back, re-clothed in fresh green leaves, despite the fact that an iris is growing practically on top of it. 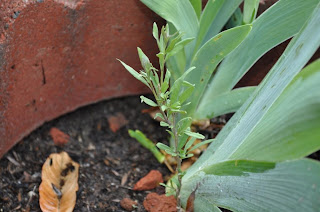