Paris might be heavenly in the spring time, but this week it’s been hotter than hell! At 9 am the outside temperature already matched the inside temperature – a blistering 28 °C (86 °F).

I’ve lived in hotter, much hotter, but in a house with air conditioning in a region that cooled down at night. You could open your windows without having to listen to the full-on roar of city traffic going past a dozen feet from your bed (albeit 4 stories down!)

Today it is forecast to max out at 37 °C (104 °F) and hopefully by tomorrow, we will see a decrease in temperature.

So what can I do about it?

I did like the idea of jumping into a fountain and we do have a nice one beside us. 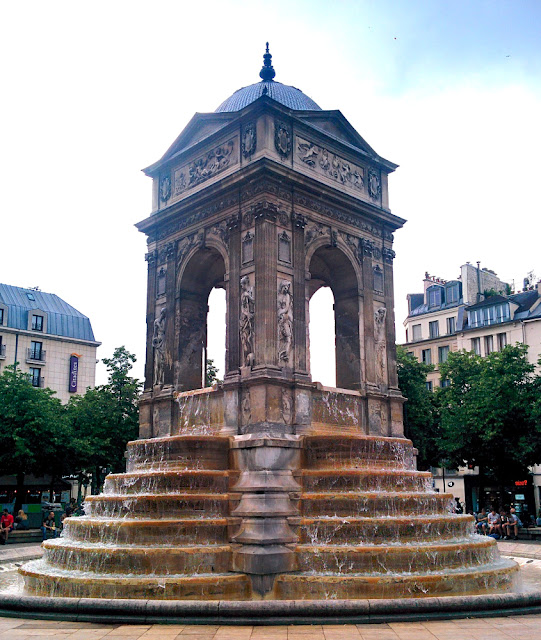 But the only one actually in the fountain was a toddler, and I thought I might look a bit out of place lying there all day!

Other suggestions included finding a shady place in the park or a shady terrace, but we are way past “shady” on the thermometer!

I did embrace the suggestion to go swimming in an outdoor pool. I’ve tried this twice. It would be lovely if most of Paris hadn’t had the exact same idea!

The Piscine Josephine Baker is right on the banks of the Seine. It was two metros away and has a 25m pool – which is fairly standard, but I’ve been spoiled using the 50m pool under Les Halles, a 6-minute walk from the apartment.

The Josephine Baker pool was crazy full when I went there a couple of weeks ago – before the heat wave, and it was hard to enjoy doing dedicated laps. It was probably fine to flop about in with your friends though I cannot imagine what it must be like now. I’m using the photo from their website. Even with a fisheye lens, it looks pokey, and it had at least 5 times as many people in it.

And there really is no view of the Seine as you swim. I’m not going back.

The other pool I tried was La Piscine Georges Vallerey de Paris. One shot on the metro but pretty much all the way to the end of the line (second last stop) and so a round trip of an hour.  The opening hours are funky too. Some days it’s open in the afternoons and others it not. And the real hours don’t correspond to what’s posted online. For example, on Tuesdays, it was supposed to be open from 11.45 to 13.30 but they closed it at 13.00. Good job, I was there for 11.45 and hadn’t landed any later.

The two big attractions for me were that the pool was open air and 50 m long. The picture from their website looks amazing…

The swimming here can only be described as vicious. Each lane has at least 18 people in it – I counted. People shoved, kicked and even shouted at each other. It was worst than the melee at the beginning of any open water race I’ve ever done. I battled my way through a kilometre swim then sat out in the sun for a bit. Out of the water, the atmosphere was a bit nicer – people made eye contact (and I don’t mean with heels or elbows like in the lanes!) and a couple of women even chatted with me. So that was nice, and it distracted me from the 30+ heat that was brewing in the real world.

The other suggestions – go to a church, the catacombs, a movie, hire a boat – all good, BUT at the end of the day, I still needed somewhere cool to sleep and I didn’t fancy kipping in the Catacombs or Notre Dame. We did escape last Saturday night to a low priced but very new and air-conditioned hotel just north of Orléans – more about that in a later blog post…

During this heat wave, my days revolve around watching the inside and outside temperatures so that I know when it’s time to open shutters and window or close them. I spend my afternoons writing in an over-warm, darkened room – not a great place for the psyche to hang out. But it’s only for a short time, I tell myself. It will cool down by the weekend and then I’ll have my “lovely” Paris back again.

We have a little fan that we brought from San Jose (and never used there!) If you set it up with a block of ice behind it, you have a mini air conditioner. 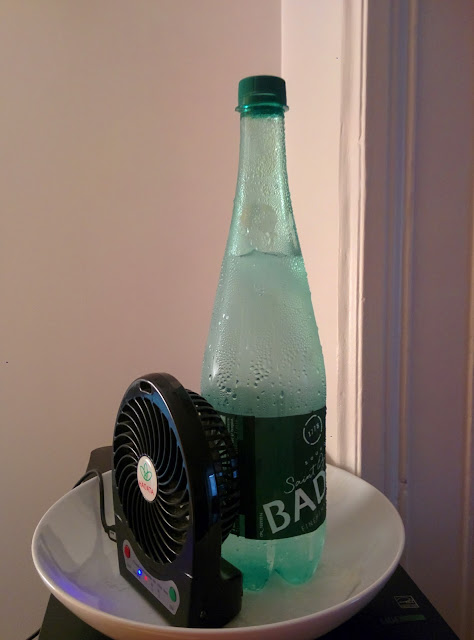 I freeze bottles of water and have a constant supply – when the ice is half melted, the air is at its coolest. It’s basically GCSE Chemistry. I could write a whole piece on why this works, but it’s all down to the frozen water molecules taking heat energy from the air to break the little bonds holding the ice together. It’s cool – literally! And if you don’t believe me, you can look it up here.

My Uncle Liam taught me how to make a swamp cooler with a damp towel and a fan many years ago. It was a lesson I never forgot and have even improved upon. I thought, if evaporating water absorbs heat energy then melting it would use even more – so I rinsed a few bath towels in the washing machine, folded them up still wet and put them in the freezer. 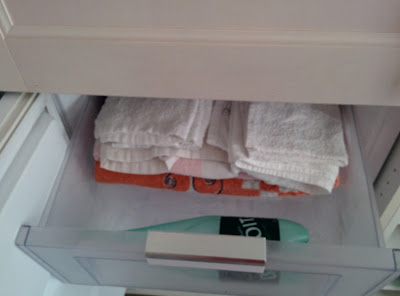 It’s important to use the washing machine first to spin the towels because if they are too damp you’ll have trouble getting them out of the freezer and unfolding them. Unfolding them is key – you want a large surface area. 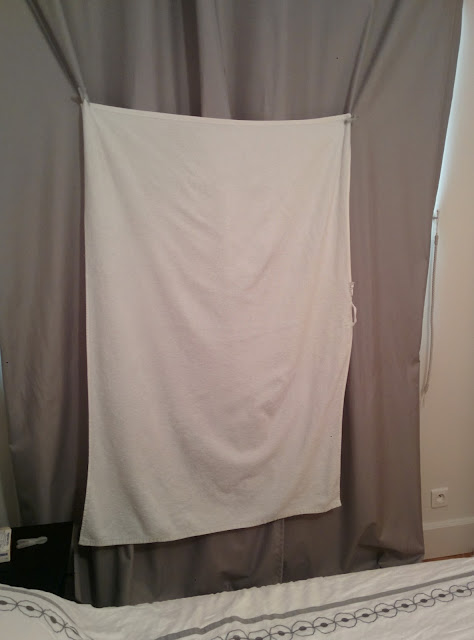 Hang the towels around your room and you will immediately feel the drop in temperature. It’s not a lot, and not for long… but better than a kick in the head (for that, you can go to Piscine Georges Vallerey de Paris!)

When the temperatures drop at night – It only got down to about 25 °C (80 °F) last night – we open the windows. That’s a whole different world of pain! We live on a really busy road with a vibrant pub and bar scene. The traffic – poor man’s ocean- we can kind of get used to, except for the motorcycles who take joy in revving their engines. Then the drunks come out and sing – usually between 1 am and 4 am. I’ve gotten used to them too. But the thing that gets me riled is the street cleaners at 5.30am. Their little trucks are the noisiest out there and hell bells, can’t they clean at 10 am? I have seen them during the day too so it’s not that they are off the roads and not obstructing traffic 9 to 5.
Then yesterday morning there was a new annoyance. At 5.30am the bottle bank right under our bedroom window was being emptied. As you can imagine it’s not a quiet procedure – lots of smashing and crashing of glass. But again, another thing my brain has learned to filter out in the middle of the night unless it gets obnoxious and wonders why these things need to be done at that time of the morning. But no, that wasn’t the thing that kept me awake fantasising about taking pot shots from the balcony (thank God, I don’t have a gun because sometimes with those motocyclists.. I’d be like, “Aim once, aim twice, aim bike!“) Oh no, it was the wee beep beep beep you hear when a truck is reversing, going on for 15 mins. Eventually, I got up and looked out the window. It was now 6 am and there was a man in a crane with a brush sweeping leaves off the top of the public toilet cubicle across the street. FFS! It took him 45 minutes to do this!

I wouldn’t mind all this cleaning if the streets of Paris actually got clean but… well, that’s a whole other post and one best written when I’m not all sleep deprived and hot and bothered!

And just when the air temperature dropped to a comfortable 25 °C (80 °F), the traffic noise abated to a gentle purr, the drunks had all passed out and the cleaners had clocked off, just then, well that was the moment the alarm went off and it was time to get up a face another day sweltering in Paris!

Sometimes it’s just hot and there’s nothing more you can do about it other than stick some more towels in the freezer. Them’s the breaks – let’s just hope the weather breaks and soon…before I start throwing washing machines off the balcony!

2 replies to How to Beat the Heat in Paris