I’m such a sucker for trains. Perhaps that’s because Armagh doesn’t have it’s own train station (a travesty in it’s own right but that’s another story) I love the sense of going “somewhere else” at a train station, the hustle and bustle, the high ceilings and airy caverns surrounding the platforms of the big city stations, the cutesy old fashioned look to tiny remote stations and the excitement when my train pulls in…yes excitement! The waiting is over, and I’m on my way.

When I first heard about plans to build a tunnel beneath the English Channel, I was a teenager. Construction began in 1988 and the idea of taking the train from London to France seemed like something from science fiction. Truth be told, I wasn’t 100% onboard with the plan – what about rabies? Would mammals carry the disease from the continent? It’s funny looking back on our fears and concerns over the Channel Tunnel now that is is established and accepted. This article from 2014 provides some nostalgic moments – Rabies and other early Channel Tunnel predictions

Interestingly, it brings up the curious notion we had of calling the tunnel the “Chunnel” – wierd to think it didn’t catch on in a world that embraced  new verbs such as “googling “and “friending” and reassigned words like “tweeting” and “liking”.

Regardless of what it’s called, knowing I was in the a tunnel beneath the ocean still left me thinking about the obvious…what if it sprung a leak? It only took about 25 minutes to actually get through the tunnel. 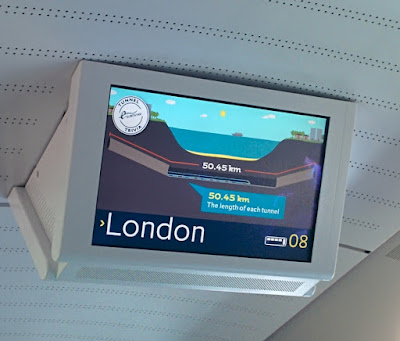 The train had slowed down a little to go through the tunnel, but in the green fields of France we moved at a fair clip. 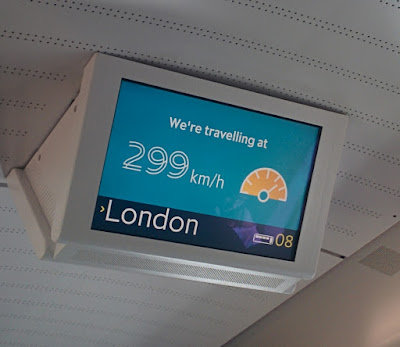 As I sat on the train from Paris to London, I had a strong sense of wonder that comes with reviewing the past, remembering concerns and dreams and knowing how it all unfolds. Not for the first time do I feel grateful for living the story.

Train travel evokes my muse too. As I watched the planet spin past, even faster on this Eurostar train, my brain whirred with prose that tried to capture the wonderment I felt. But it wasn’t until we arrived in London that I saw an image that summed up the attraction and romance of trains. 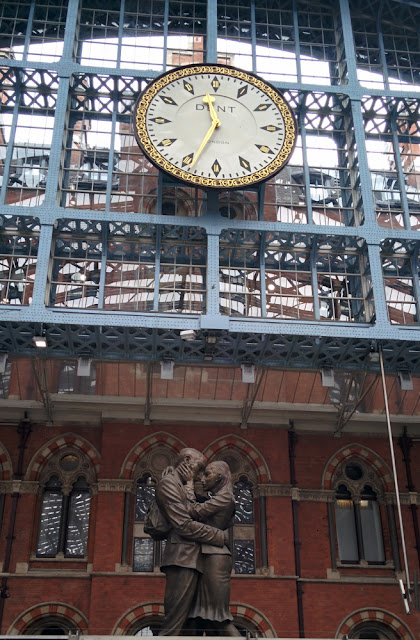 A day trip to London from Paris (or vice versa) is so easy – though not exactly cheap on a Saturday and I suspect you can do better on a weekday with a lot of advance warning. We choose the 10.15am departure from Gare de Nord, giving us a civilized start for a Saturday morning. 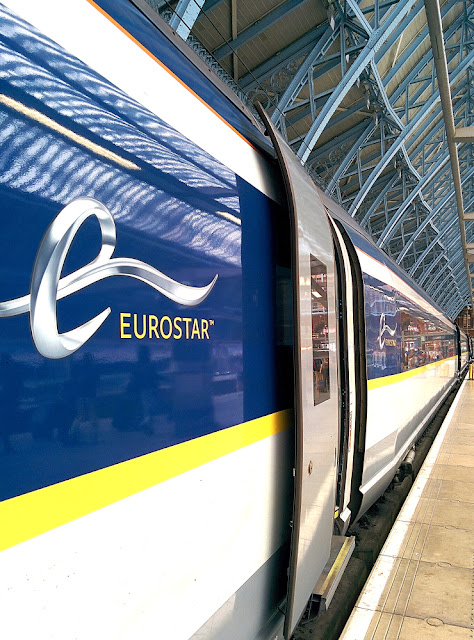 We needed to be at the station 45 minutes prior to departure to check in and clear security and passport control. It took that time to do everything at a relaxed pace and there was actually very little sitting around or queing. 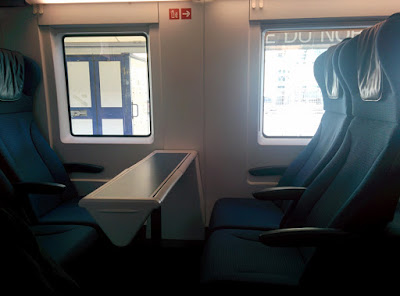 The trains were comfortable, though our seats on both legs of the journey had us sitting by the plastic wall between the windows. Not good for seeing the scenery, but on the way to London the train was relatively empty, and we just hoped into a more agreeable seat. On the way back, the train was packed, so we just had to put up with it.

When we arrived at St Pancreas International in London on time at 11.30am, we took the Thameslink train to City Thameslink and walked from there to St Paul’s Cathedral to meet our friends from California who were holidaying in London.They had told us to print off a discount coupon which, when presented with the receipt for our train ticket, (not Eurostar nor Underground tickets apply though) got us a 2-for-1 deal into the Cathedral.

Here’s the link for that if you are heading that way – http://www.nationalrail.co.uk/times_fares/2334.aspx

So we had entrance to St Paul’s and a head set audio guide for £9 each. 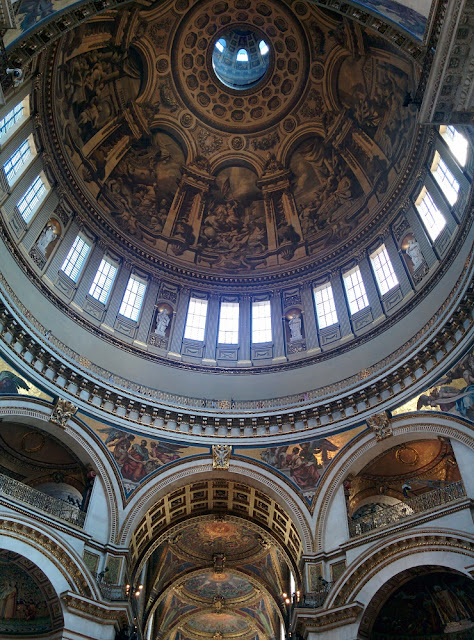 The cathedral itself seems to have had nine lives what with all the times it was destroyed and rebuilt or came under fire during the blitz. 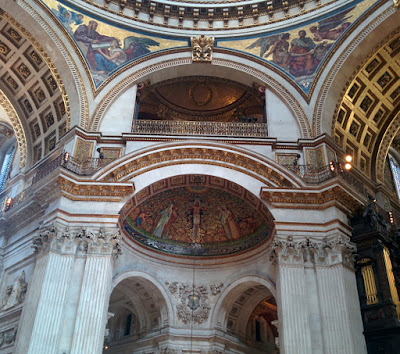 Though the cathedral is now an Anglican cathedral, it still has a lot of the gilt ornamentation that the Catholic Church used in their art works. The gold is to symbolize the shining light of the divine God. 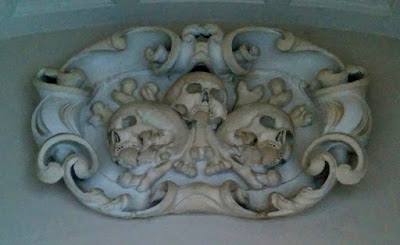 The crypt below contains lots of bodies of generals and memorials to the many wars in Britain’s past. They also have a memorial for Florence Nightingale. 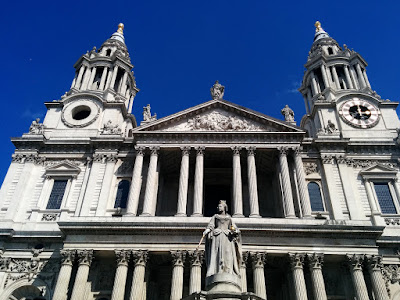 I believe the lady out front is Queen Anne.

After the Cathedral, we took a wee wander through the streets of London. I found it amusing that Scotland Yard is a place where they have their police head-quarters, but in Ireland Yard they had this! 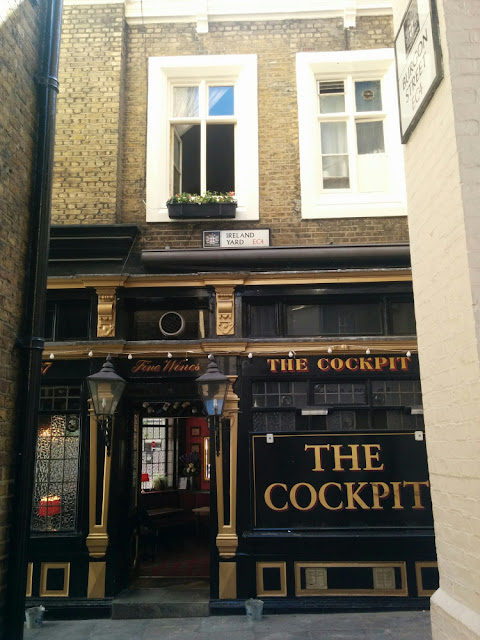 Paris is turning me into a city snob. (Or perhaps it’s Armagh that is doing it!) I found the Thames to be no match for the beautiful Seine. London’s architecture, though not as pretty as that of Paris, or even Armagh, does try to combine the old with the new. Here, the Millennium Bridge looks like it leads right up to St Paul’s doorstep. 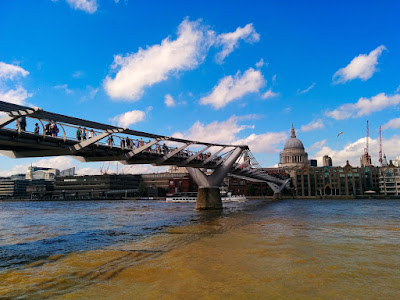 But maybe when London Bridge was falling down, they should have just let it go. And that dopey building in the background looks like its about to fall down too! 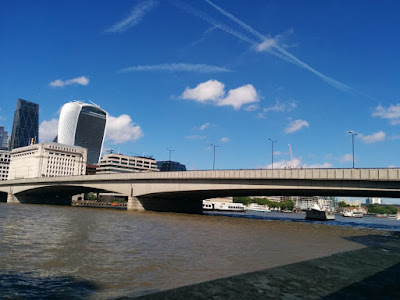 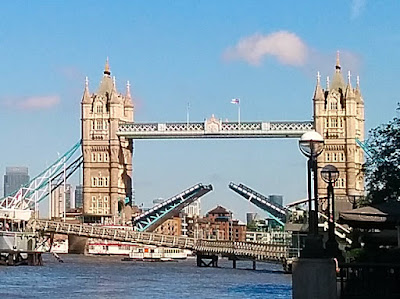 It was also great to also meet up with other friends who live in London. We had a very interesting tour of the building he works in, which seems strange, but it is really beneficial for the book I’m writing at the moment, not to mention its wow factor for biology and techy geeks. I’m mentioning here it as a thank-you to him.

We finished off with a lovely curry (aka traditional London cuisine!) and caught the 8pm train back to Paris, arriving home at 11.30pm.

A very straightforward and enjoyable day trip. Though apparently two days later that was not the case for these unlucky sods who had a 4 hour delay because of some drunken British passengers!