The California Academy of Sciences has been on my to-do list for about 8 years now and recently I was able to transfer that item to my to-done list. My fellow science nerd and great friend, Christal (of the Alcatraz swim) accompanied me up to San Francisco for the day’s outing. She was keen to visit Claude the albino American Alligator. 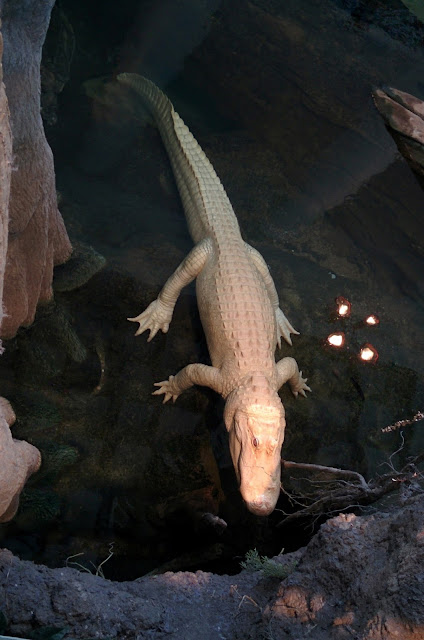 The parking fairies favored me with free parking in a relatively close-by spot on John F Kennedy Drive between Music Concourse Drive and Conservatory Drive West. 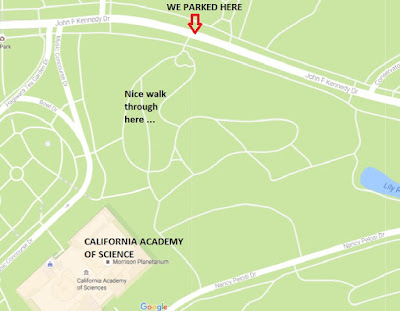 A good spot to keep in mind if you are considering this science-nerd/child friendly excursion.

We had fun in the “Rain Forest” peering into glass boxes to spot the reptile or amphibian camouflaged against vegetation. The tiny orange “jelly bean” frogs went a long way towards curing me of my frog phobia. I could actually bear to watch them and would even go so far as to describe them as cute. Other bigger, greener frogs…not so much – they still made my skin crawl (sorry Kermit!)

We admired how well selected and put together the vegetation was too. That must be a fun job.

There were a couple of cocky parrots that spoke saying, “Hi there!” I thought it might be funny to teach them some swear words but thought better of it!

But it was the aquariums that stole the show.

Having done a fair bit of scuba diving in the past, I still love to watch coral communities, and their array of color never fails to amaze me! 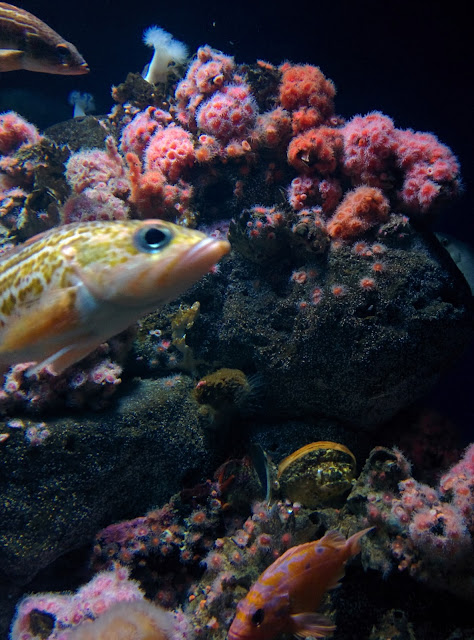 The interactions and diversity is a real treat – we need to take care of these habitats and the California Academy of Sciences does a great job of raising awareness among the public. 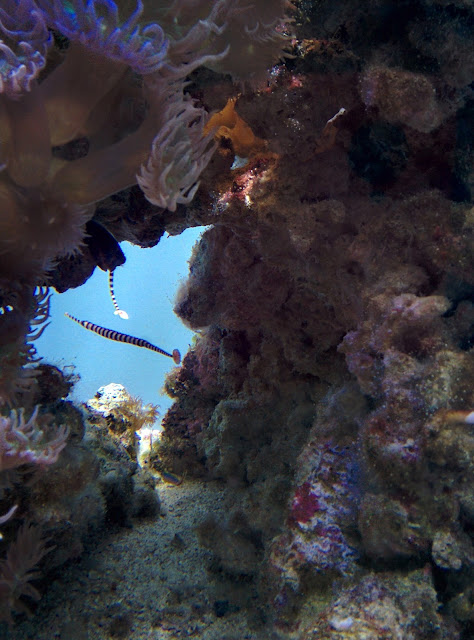 Part of me wished I were in a wet-suit, listening to the hypnotic draw and gush of my breath through a regulator, suspended with perfect buoyancy control over this reef…just watching… 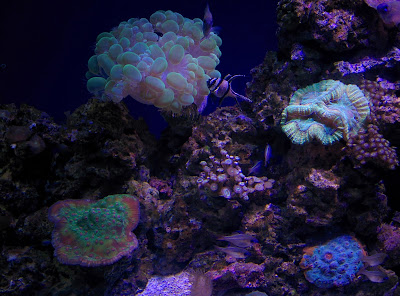 And yet another part of me was delighted to be standing in comfy clothes in a  perfectly climate controlled room watching this through glass! 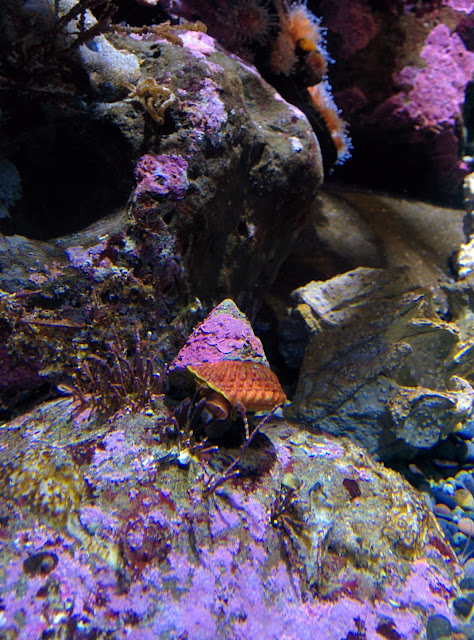 How adorable is this little hermit crab in his funky tri-colored shell? And these guys…. 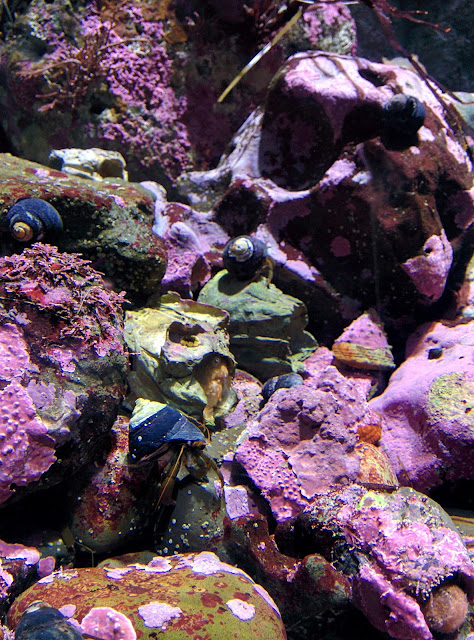 One thing to watch out for is the signs that ask you not to take pictures. 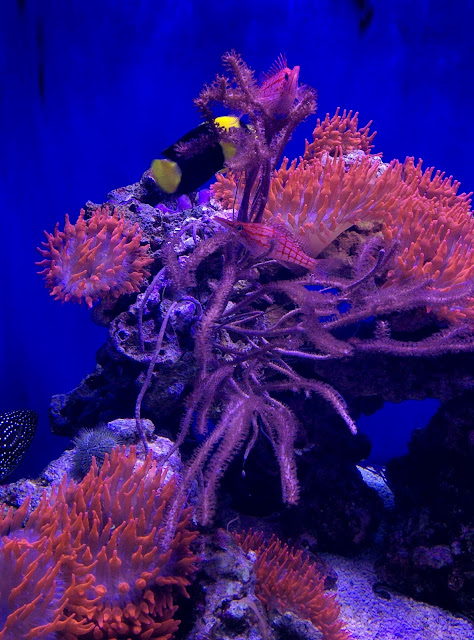 I’ll admit that I missed a few, but thought it okay because I made sure to have my flash turned off. 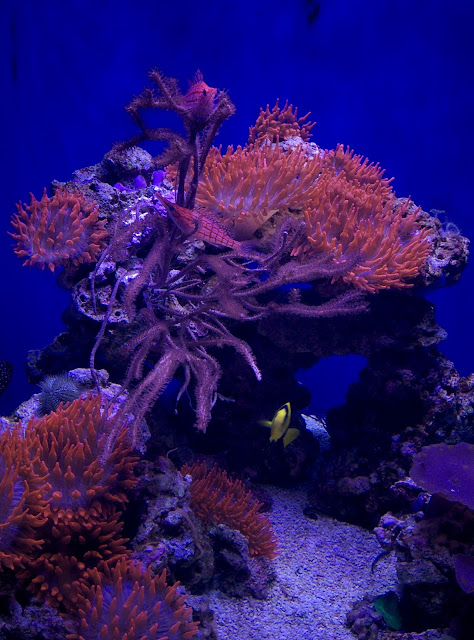 The colors were great anyways. 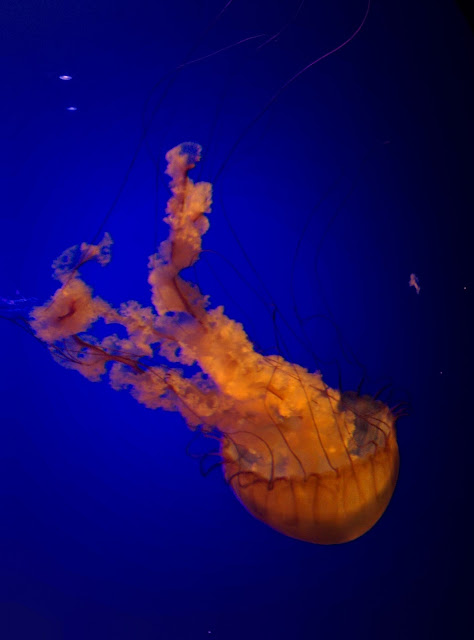 But I was a little confused when some signs said you couldn’t take any pictures at all. Surely if the flash is off it’s fine, right? So I asked a member of staff about it, and her answer was extremely enlightening.

Apparently many cameras, and even those on phones, use infra-red to detect light levels and focal distance to the object. Many of the deeper ocean species have sensors (like eyes) that are sensitive to and which can be damaged by infra-red. Many people don’t know how to turn that feature off on their camera, some camera’s you can’t disable it, in fact, many even forget to turn off their flash, so for more sensitive creatures they ban photographs altogether.

At this point I was a bit worried. I confessed to her that I had only noticed some of the signs after I’d taken a picture (without flash but probably with infra-red), and apologized, feeling awful about it. Her attitude was that a small amount is probably fine, but if the creatures are exposed to lots of infra-red and flashes it will be a issue. This gorgeous Leafy Sea Dragon is one case where I think I’d noticed a sign after I’d done the dastardly deed! 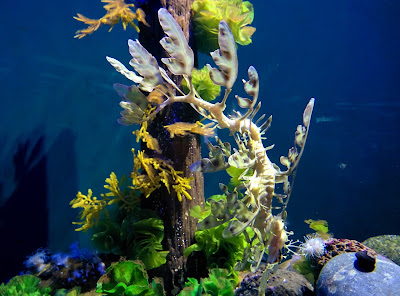 I will be much more careful in the future. Since I’d taken the photos, I think I should share them but urge you not to do what I did. I’m still not sure which photos were okay to take and which weren’t. Yes, there are signs but with all attention being drawn to the sea creatures, they can be hard to miss. Did I already mention – I feel terrible at putting the wee critters in harms way?

Maybe a blanket ban on photographs is what’s needed. But at the touch tanks I asked permission from the staff present. This was before I’d even learned about the infrared, so I was trying to be careful! They said it was okay to take photos here as I petted the starfish – they feel kind of crusty, and not one bit slimy, as I’d imagined. I never touch anything when I’m scuba diving – you just never know when  you’ll harm or be harmed! 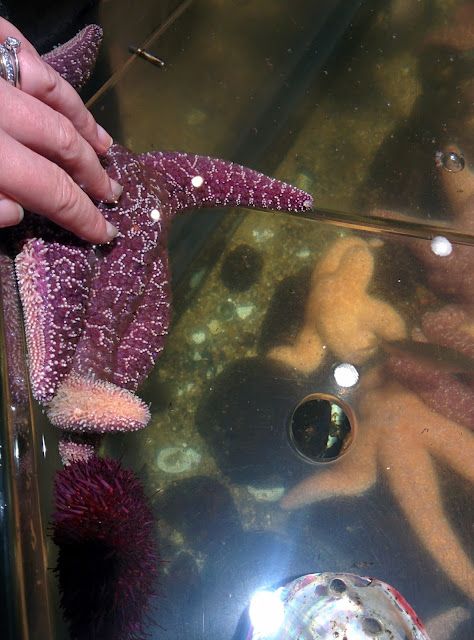 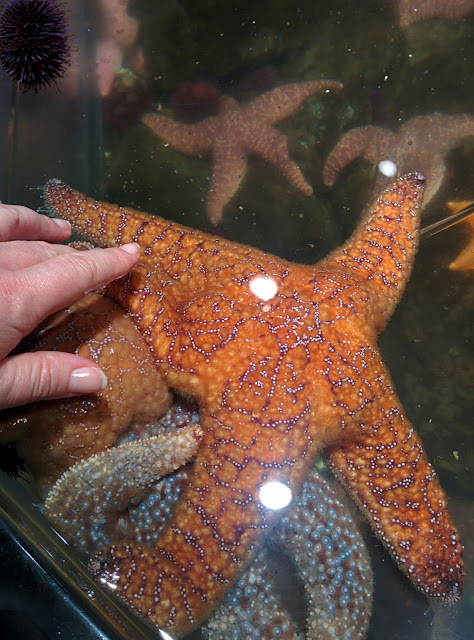 Garden eels are one of my favorites from my scuba days, to such an extent that I’ve even got a scene in my new book that features them. So I was thrilled to see them. 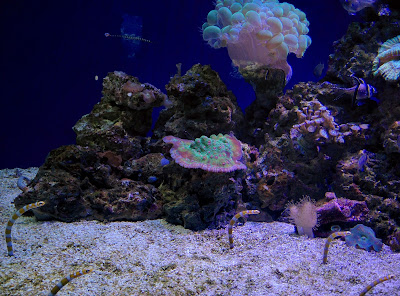 When diving you need to keep really still. Any little movement makes them disappear into their holes. If you hang around they’ll come back out in a few minutes.
These guys were much less skittish and despite all the movement outside the tank they didn’t disappear once. 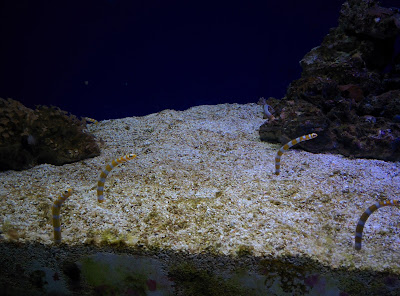 I sure hope it’s not because they’ve gone blind from all the photography!