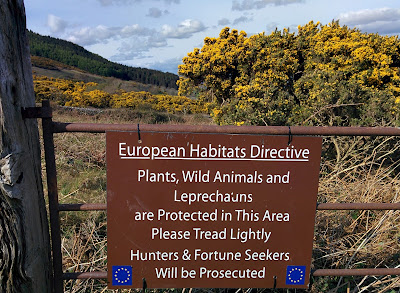 I remember a hen party in Carlingford I went to years ago. The theme for the party was fairy-tale characters, and one of our group dressed up as the Wolf from Red Riding Hood. Somehow she got separated from the rest of us and decided to take a shortcut across a field to the house we’d rented for the night. It was a full moon. When she arrived at the house, panting and (rightfully) pissed at us for leaving her behind, we attempted to comfort her even as we laughed ourselves sick at the prospect of a local looking out the window and seeing this wolf-girl running across the field by the light of the moon!

However, it seems that sightings of mythical creatures are not an uncommon occurrence in Carlingford, County Louth. In PJ O Hare’s gastropub, (that ‘s a fancy name for a pub that serves great grub and not necessarily one that gives you gas!) there’s a reward for finding Sean Og, a naked leprechaun – perish the thought!  His clothes and some of his possessions were discovered nearby and are now on display in the pub (so it must be true!). 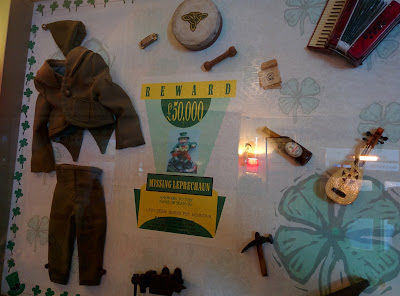 The medieval town of Carlingford is simply gorgeous, encircled by it’s ancient walls and on the shores of Carlingford Lough – Ireland’s very own fjord. 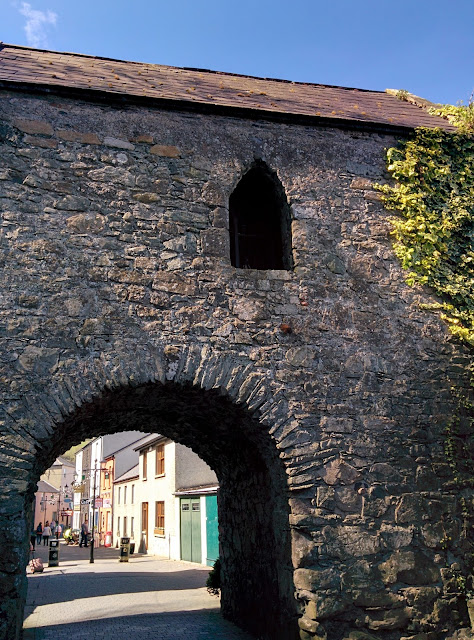 It’s picturesque setting and central location along the east coast, easily accessible to both Belfast and Dublin, makes it a popular destination for stag and hen parties on the weekends, and a peaceful getaway midweek. 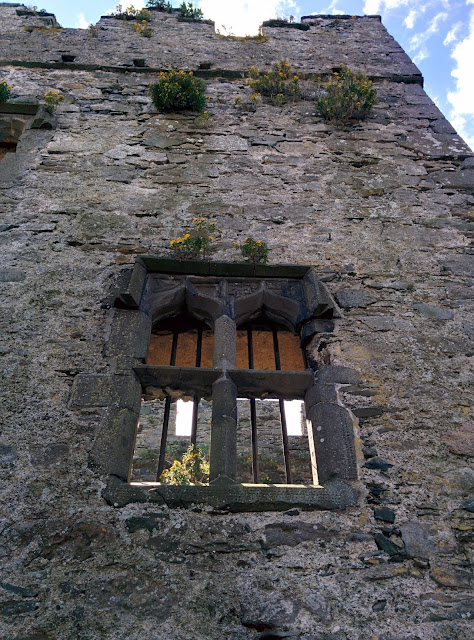 My Friend Fiona got married here.(You remember, Fiona, from the New Zealand trip)

We were home over her wedding anniversary, which also happens to be the same date that My Husband and I met. To celebrate we had a double-date day-trip to Carlingford and it’s beautiful surrounds. 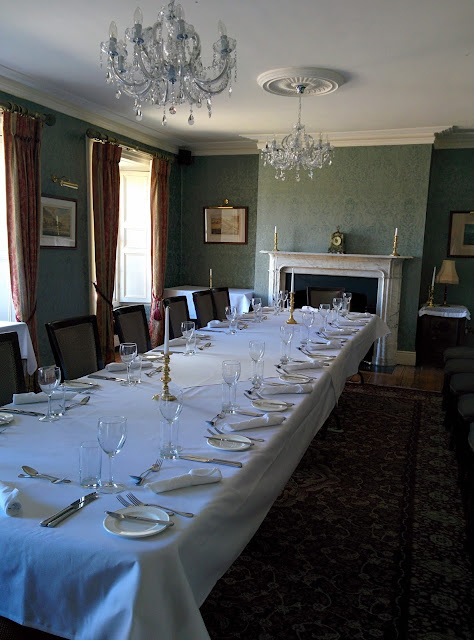 We popped in for a wee visit to Ghan House, where they’d had their wedding reception and the owner allowed us free range to take pictures. 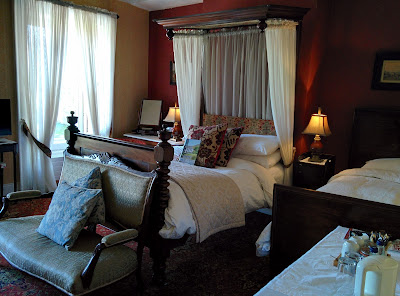 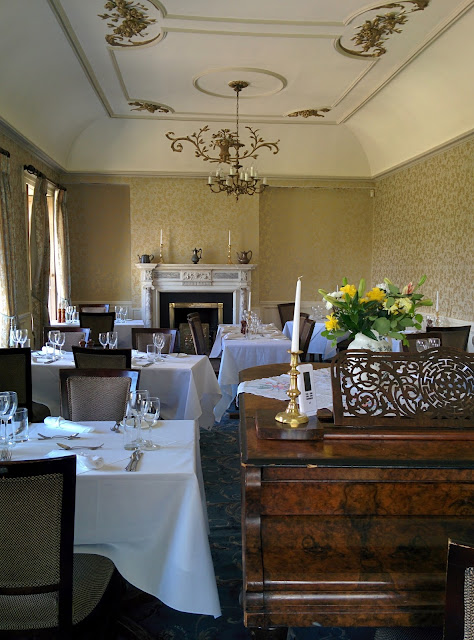 The views of the gardens could be perused right from the dining table. 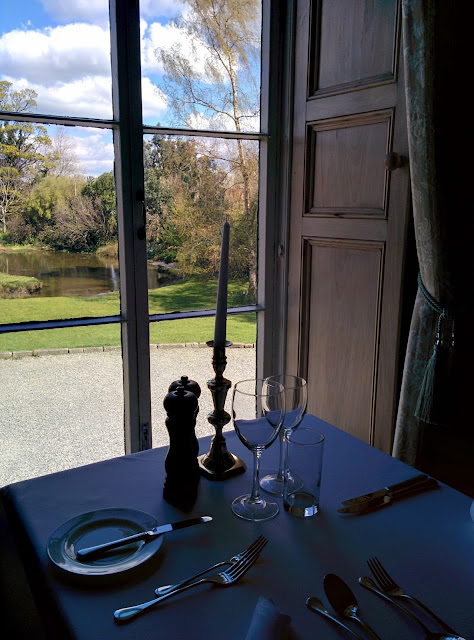 What a beautiful place to stay for a weekend! And so much to do while here.

We took a hike up Black Mountain to see the deserted village. When I say “hike,” I mean “Fiona Hiking” as in, wearing glamorous clothes, high heels and driving as far up the mountain as the road and car allows!

The views were well worth the …em… exertion! 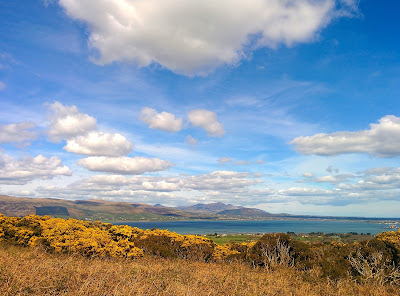 There are many abandoned villages in Ireland.

The population before the famine was said to have been more than 10 million, pushing people to live in harsh, unforgiving (though beautiful) landscapes. 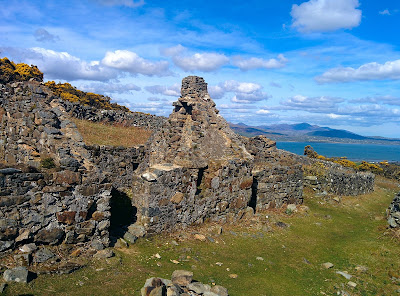 Scratching a living from this land was a tough job, and when the potato crops failed many starved and as many left. 170 years later, the population still has not recovered, hovering at about 6.5 million for the entire island. Compare that to the population of the Bay Area here in California – 8.7 million.

So while this particular village may not have been vacated at the time of the famine, the knock-on effect resulted in the population moving to lower altitudes and more urban settings, abandoning these settlements high in the hills. 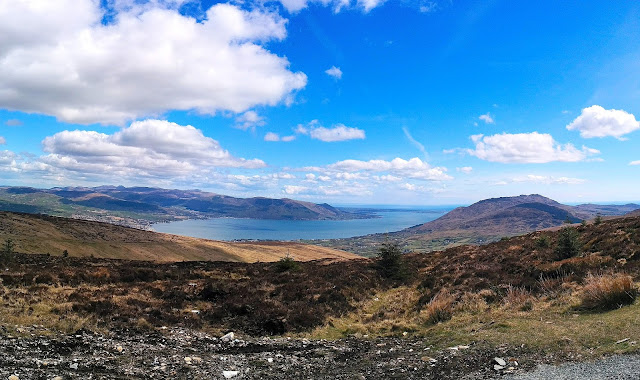 Life may have been easier in the lowlands, but the views up here remain spectacular!