Port ship actually docks at: Laem Chabang
Attraction/Town you are aiming to visit: Bangkok
Distance from Port: 80 miles, 2 hrs by bus
Mode of transport we used: Ship’s tour bus shuttle $40 each
English spoken by locals: Yes
Ships tour necessary? Sort of – if you want to go to Bangkok, I would advise it. However, if you are choosing to go to Pattaya, a closer town, then independent travel would be fine. Again, had the ship given us more accurate direction, we might have know this at the time.
Hassle from merchants and taxi drivers: Funny story actually….read on… 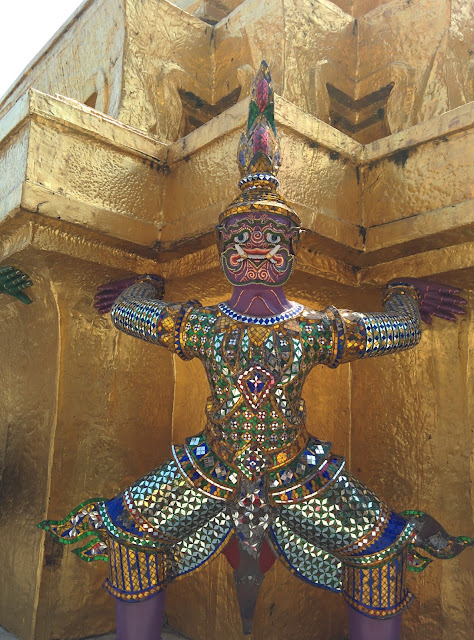 On first glancing the itinerary for the cruise, I read that we had a stop at Bangkok. Once again, I didn’t know the lay of the land and thus presumed that Bangkok was coastal and a port, but alas the ship docks at a port 80 miles away.

There is a ships tour – a bit of a misnomer since it is just a bus ride… a very expensive bus ride for Thailand… right into Bangkok and back to the ship for $40 each. The bus drops you off, and from that point on, you are independent until it’s time to get back on-board and the bus takes you back in time for the ship’s departure – the key words are “on time”. We fell victim to the scaremongering about how the traffic is crazy and how we’d run the risk of missing the ship if we did go the whole hog independently. So we went the with the ship’s tour. If wandering around in Bangkok on your own for a few hours is too scary there is also a “Best of Bangkok” tour for $139, though not for us…We fancied wandering at our own pace, not being herded about and having to listen to a guide.

We’d seen our fill of temples and wats. We only had about 3 hrs actually in the city, so we decided to just drop into the Grand Palace…as ya do! 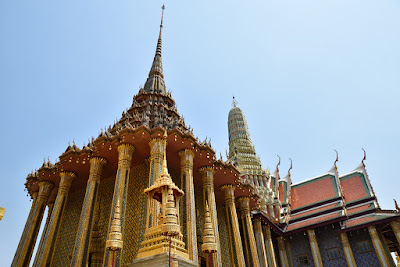 The bus dropped us off at the Asia Hotel, which is right on the light rail. The guide on the bus recommended that we take the train to the river and then river taxi to the Grand Palace. To return she recommended taking a cab.

We reckoned that if everyone from the cruise (there were about 7 bus loads of us) was going to do that we’d reverse it, grab a cab from the hotel to the Palace and work our way back on public transport. We’d pulled out Thai Bat from an ATM at the service stop en-route where we also saw these cute solar panels. 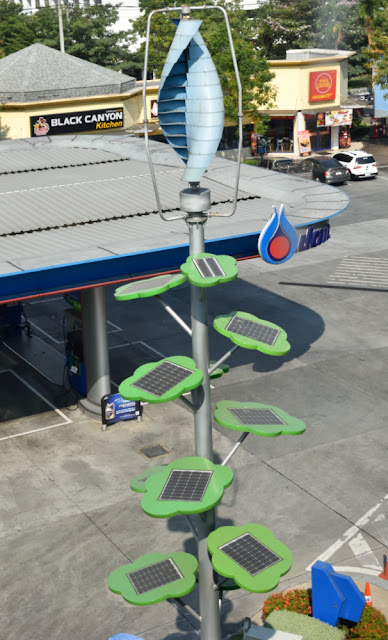 We were good to go…

By now My Husband was a dab hand at negotiating taxi fares. The first cab asked for 300 Baht – too much according to what we’d learned from the guide and Lonely Planet. The second driver quoted us 200 Baht – that was more like it. Feeling quite on top of things in this chaotic city we jumped in and headed for the Palace. 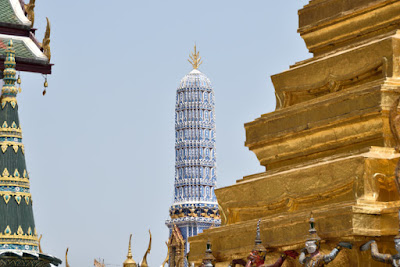 When it came time to pay the driver, My Husband handed him a 1000 Baht note. Dismayed the driver waved it away – he’d no change! We had none either. The driver said, hang on, he’d get some and quickly drove us up some side streets, round a few blocks, pulling up across the street from a couple of banks. He left the keys in the ignition with the car’s engine still running. He hopped out and disappeared into the throng of people on the sidewalk. We didn’t see which building he’d gone into. We sat in the car incredulous. He was hardly going to steal 1000 Baht and leave us his car, but as the minutes ticked by, our imaginations swept into overdrive.

We had time to conjure up several scenarios … Perhaps he was really a bank robber and we were in the getaway car! …Or maybe he’d stolen the car. We were sitting ducks and he was 1000 Baht up… Then just as we were beginning to wonder if we should bail out of the taxi he showed up, grinning and waving our change. 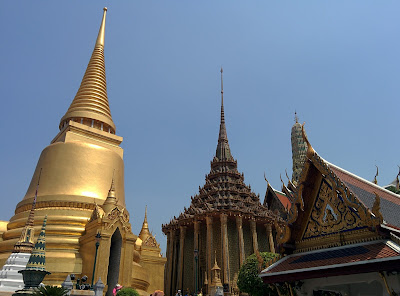 He drove us back to the entrance of the Grand Palace and dropped us off thanking us for the large tip we’d felt he’d earned. 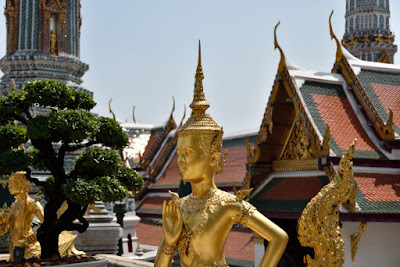 The Grand Palace was thronged with tourists but still really worth seeing. 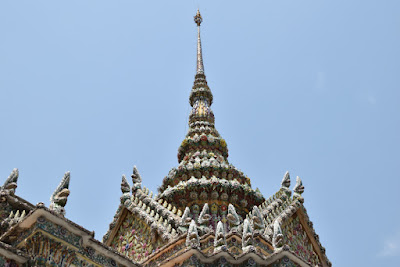 You could walk around here for hours. There was so much to see. 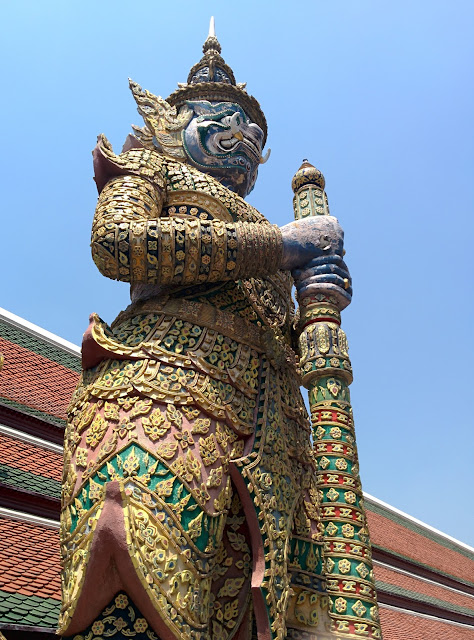 It’s worth zooming in on the following photos to take note of the elaborate details in the tile work and painting. 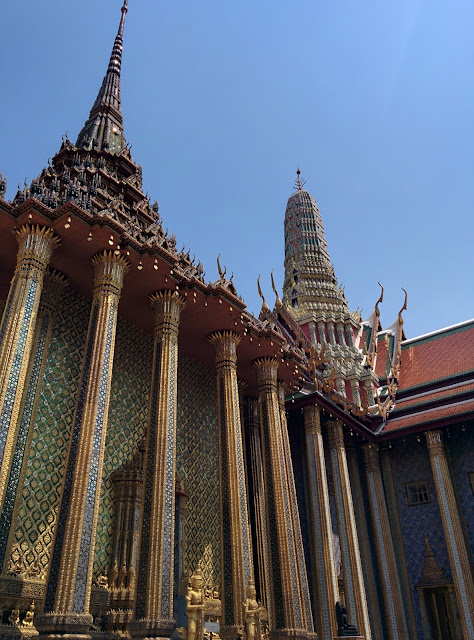 They even have the beautiful tile-work under the eaves! 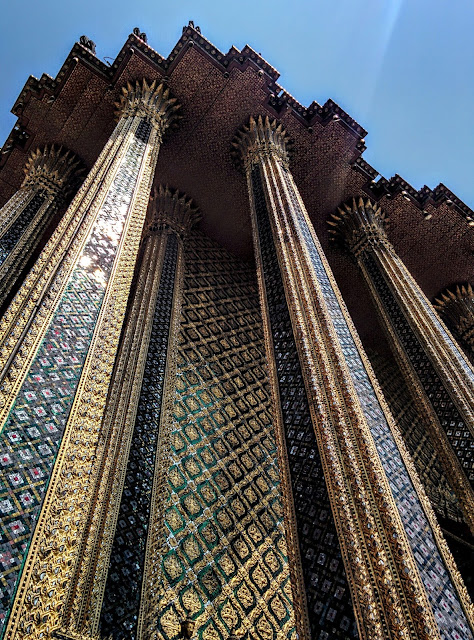 We didn’t take a tour within the Palace preferring to wander at our own pace. We were hoping to hire the audio tour headsets but there were none left. We didn’t even have internet coverage so we couldn’t google things, like, who was this guy and is he really gold? 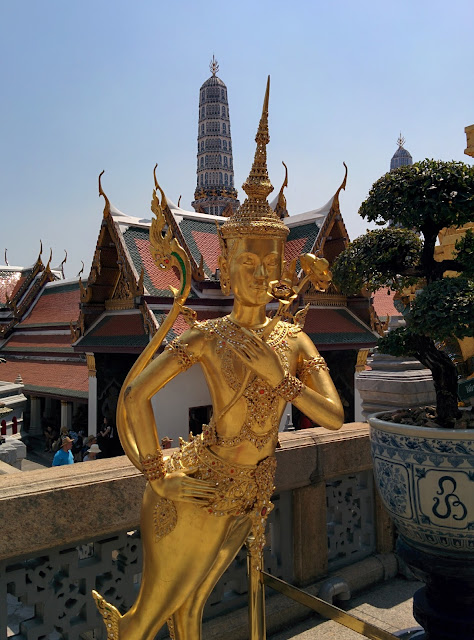 We didn’t know what we were seeing and had many questions, but it was still lovely to see everything all the same. 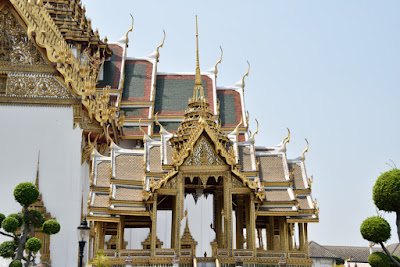 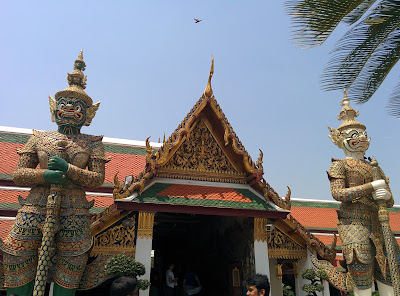 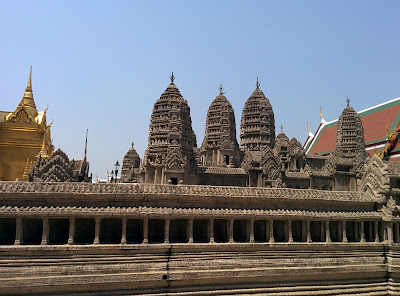 From the above photo you’d almost think you were at the real thing, until you see the scale against the  rest of the palace 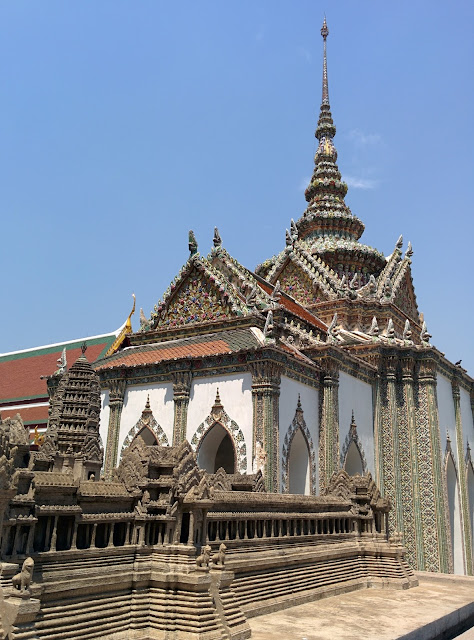 One my favorite things was a wall mural of really vividly colored drawings. 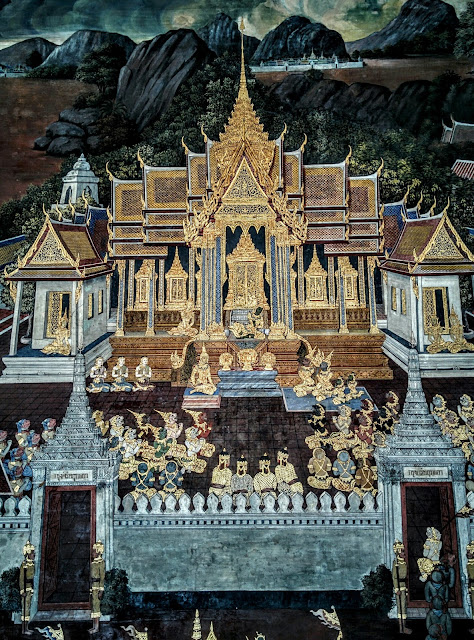 The gold in them really twinkled and caught the light. 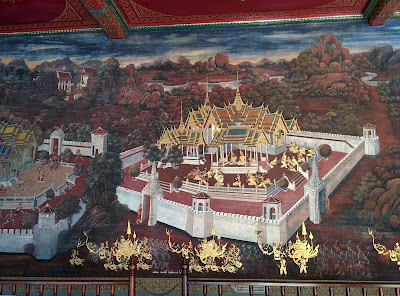 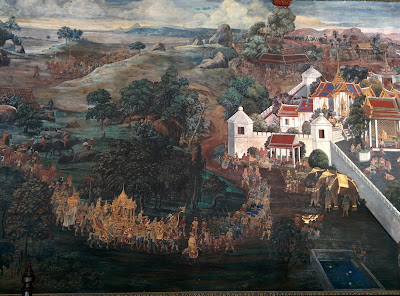 The buildings in this part of the painting looked like what we were standing in! 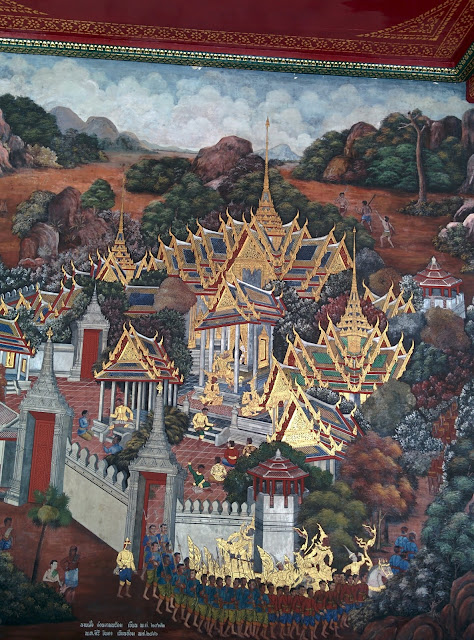 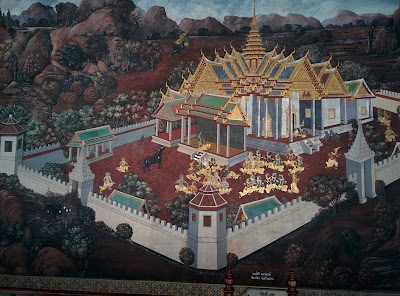 These must have been recounting great legends! 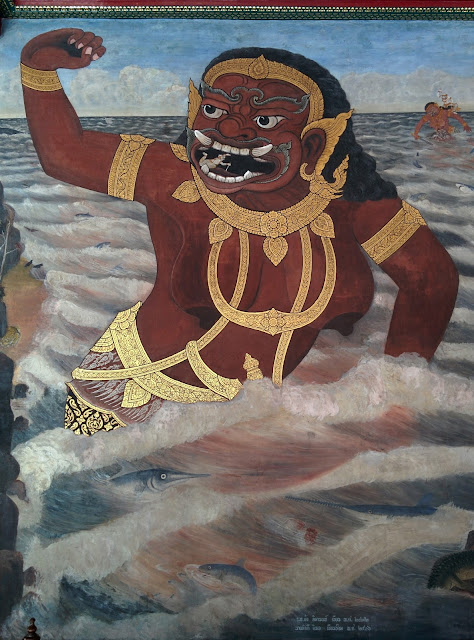 These monkeys are in for a surprise when they cross this bridge! 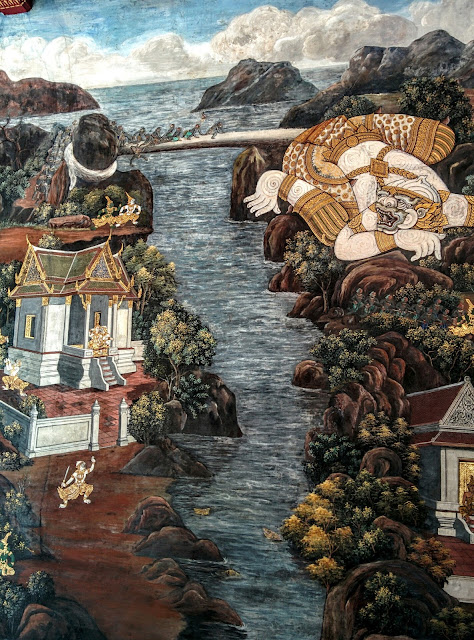 I surprised myself by being so enthralled by the paintings as I usually don’t like art galleries – these were really special!

I liked seeing the guards. The elephants were so Thailand! 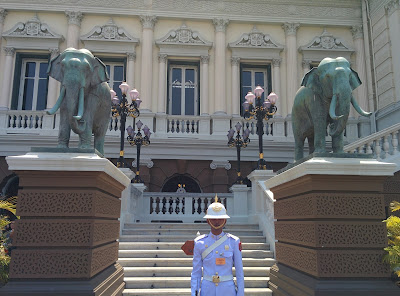 Even the stone statues had something about them 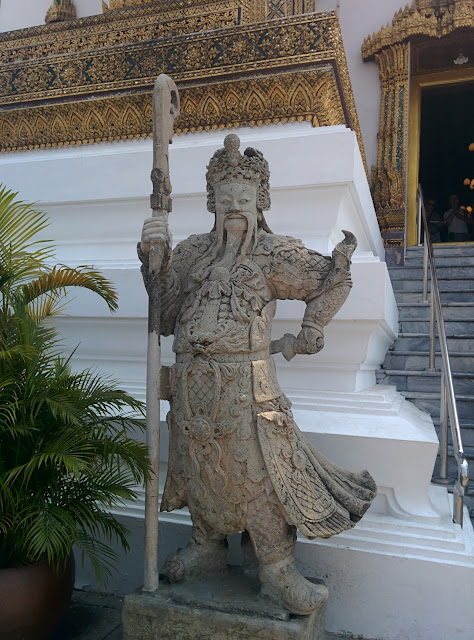 Three hours flew by. The place was so crowded that we had to queue to get out! Eventually, we made it down to the river and picked up a river taxi to King TaksinBridge where we picked up the train. We switched at Siam Station to the line that would take us back to the Asia Hotel.

I was impressed by how orderly the lines at the train station were. 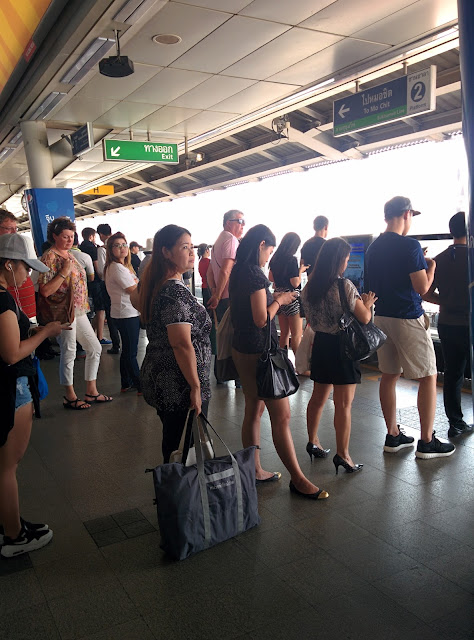 We got the bus back to the ship. I would have to say that from my quick glimpse of the city of Bangkok, I wouldn’t be in a big hurry back. It’s a massive, crazy city and I think there is much more to interest me in Thailand than this. 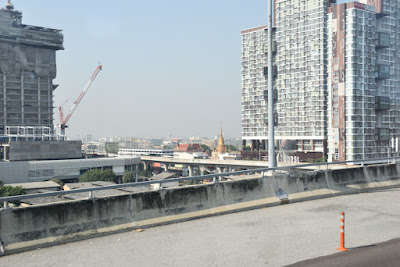