2016 is bringing us big changes. We are not sure where we’ll wash up after it all. It’s scary and exciting all at once. Here’s what’s happening… My Husband’s contract finishes up this month and he’ll be looking for a new job. But before he does, we are going to take a few months out and travel. (If robbers are reading this and you know were we live, please note that we have hired a man with a vicious dog, who does martial arts (the man not the dog!) to house-sit while we are away. Or maybe we haven’t … but would you risk it?   *Narrowed eyes* – I don’t think so…!)

Anyways, one of the places we will visit is New Zealand. I’ve been there before. Back in 2002 I embarked upon a two-year-long trip around the world. It was on the heels of a divorce and I believed that the only way to heal my broken heart then was to travel. What a way to self medicate! It forced me out of myself, to experience life at a time when I really just wanted to curl up and wither away. Like many things, I’ve discovered in my life – sometimes the worst things that have happened to me have turned out to be the best things that have happened to me.

My trip began in 2002 in South Africa for 7 months, where I worked as a volunteer on a Dolphin and Whale research project and learned to dive there. Then I went to Australia for 3 months and dived the Great Barrier reef for a couple of weeks. New Zealand 6 weeks, Fiji 2 weeks, then the Canadian Rockies for 10 months where I fulfilled a dream of being a ski instructor for a season. A quick 6 week tour of  the US and then back home to Belfast to teach Biology in 2004. Shortly after, I met the love of my life and married him in 2006.

During my travels, I kept a journal, which I emailed home periodically. These emails were  typically written in internet cafe’s where I had to pay for internet time. So I had to write quickly and hadn’t much time to edit. The writing was rough, first-drafty, misspelled with terrible grammar, but entertaining enough that many of the recipients told me that I should make it into a book – Eat, Pray, Love beat me to it!

My Husband has never been to New Zealand, so we decided to incorporate that in our Pacific Rim trip in the next few months. I pulled out my old journals and reread them. I enjoyed them so much that I decided  to attempt to correct the grammar and spelling and present it as a kind of “throw back” blog post in the weeks coming up to our departure – you know – in between putting away things that the giant ninja dog might chew while we’re gone – yeah, maybe the dog does do martial arts too!

There are some foot notes with it to help give context and one XXXed out name because I haven’t had the chance to ask that person if I can publish that name. Fiona – my travel buddy and all round wonderful person, didn’t mind me using her name.

Though I journaled through South Africa and Australia, I’m sticking with the New Zealand section. When I get there in March I can use it as a comparison. We pick up the story in April 2003 as I fly into Auckland…

A Change in Climate
Flying into Auckland, I was struck by how green everything was.  Considering it was nearly ten months since I had seen so much green, I could really understand now how foreigners perceive Ireland.
Anyway, the best way to describe the difference between South Africa, Australia and New Zealand was this: If each country was like a new house being built then Australia hadn’t even started the landscaping of its grounds.  South Africa had started. It has fountains, ponds and water features, i.e. the hard-scaping in place and was waiting for the plants to grow in. New Zealand had fully matured grounds with water features, gazebos, mazes, the works.  It truly was a beautiful landscape.
I arrived in Auckland and met up with a girl I went to school with.  Fiona was travelling around the world too, but in the opposite direction. By coincidence we happened to be in New Zealand at the same time.  It was great to see her again, especially as New Zealand was the first place I’ve come to where I hadn’t had the luxury of knowing any locals to meet up with.  So we decided to do the Kiwi Experience together.  This was a hop-on-hop-off bus trip system similar to the Oz experience I had already done on the way up the east coast of Australia.
My Dad had told me that his friend’s son was in New Zealand, but he wasn’t sure where. He was finding out the contact details for me.  In the meantime, Fiona and I wandered into an Irish bar, for a bowl of soup for lunch. The barman, upon hearing our accents, asked us where we were from.  When told him we were from Armagh, he said he was too. I started laughing and said, “Are you XXXX Mc XXXXX?”
He looked a bit concered, in a “Who wants to know way?” But yes, it was my Dad’s friend’s son.  We couldn’t believe it – and we got a free soup.
On Friday, we started the Kiwi Experience and arrived up in Paihia.  That first afternoon we booked to do a swimming-with-dolphins tour.  I was a bit “dolphined1 out” but thought it would be cool to actually swim with them.  Unfortunately, when we did eventually find a pod of bottlenose dolphins, they had young with them. According to New Zealand law, we couldn’t swim with them because of this.  I still enjoyed watching them, so it wasn’t a wasted journey.  The boat trip was a bit cold.  The weather was like the start of autumn, on a good day at home2, but I’d been spoiled by too much sunshine and heat. I was feeling the nip in the air.  When we got back to land, we spent a couple of hours lazing in natural hot pools in a place nearby.  It stank of sulphur, but you did get used to it after a while. 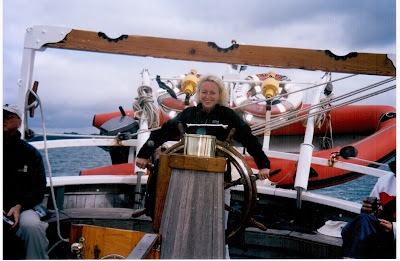 Next day, we boarded the J. Tucker tall ship for a voyage around the Bay of Islands.  I got to drive the ship, well steer it I suppose. Many of the crew commented on the fact that that never usually sailed so close to one of the little rocky islands that we passed.  I don’t think they were complimenting my navigational skills, which were; let’s face it, getting an international reputation3.  Anyway disaster was averted by the skipper taking over, and we had a glorious trip.  Back on land, we capitulated to the New Zealand climate and went shopping.  A pair of gloves, beaney hat, thermal undies and a lovely pink fleece later, and I felt better equipped to deal with the Kiwi climate.
That evening, Fiona and I went to the pub quiz in the nearby (too near really) bar and came fourth, winning a large pizza for our efforts.  Next day, we had a sleep in and then went kayaking in the Bay of Islands.  It was Fiona’s first ever time in a kayak, and she coped admirably.  In fact, we spent a long time mutually congratulating each other.  Fiona, on her new found paddling skills, and me, on my prowess as a teacher. 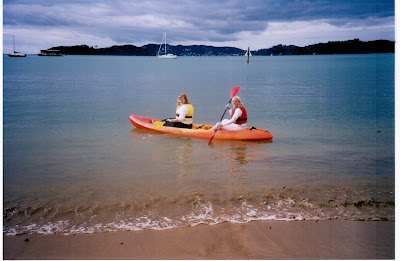 Kiwi Experience was already starting to go the same route as the Australia Experience.  We were constantly bumping into people we met along the way and were making lots of new friends.  I even bumped into a guy one night from Bangor, Co. Down who I’d met on one of the dive boats in Cairns.  Fiona was amazed.  She would get used to it.  We were going to be tripping over lots of people the whole way round New Zealand.
New Zealand was truly beautiful.  Dare I say even more so than South Africa and Australia.  There was a lovely atmosphere, despite the chill in the air, and I was already wishing I had more time here.  My advice to people thinking of a trip to both Australia and New Zealand –  give yourself plenty of time for New Zealand.
As I walked up to the hostel this evening the sun was setting over the Bay of Islands. It was simply stunning.  The Bay was practically landlocked and within it were scattered dozens of little islands.  The water was a perfect mirror of a pink and bronze sky. Simply looking at that kind of thing fills the soul.  Once more, I think someone up there was watching over me and will continue to as long as I let him, or her.
1 – I had volunteered on a Dolphin and Whale Project for three month while I’d been in South Africa.
2 – “Home” means Ireland.
3 – This refers to a diving incident on the Great Barrier Reef that resulted in me and my buddy having to be towed (by speed boat) back to the ship because we’d “lost” the ship and gone quite far off course.

Pretty tame so far. Let’s see how long that lasts for!