“So come with me, where dreams are born, and time is never planned. Just think of happy things, and your heart will fly on wings, forever, in Never Never Land!”

–J. M. Barrie, Peter Pan
This the last in the series from my trip back in time to New Zealand… 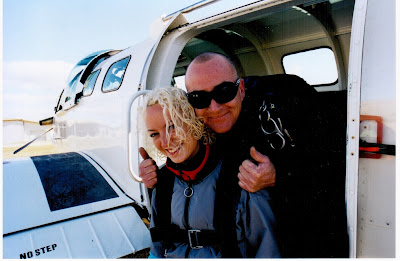 The 23rd May 2003 proved lucky for us.  We awoke to a crystal clear morning in Wanaka, a ski resort in the South Island.  The snow capped mountain peaks twinkled in the morning sun as we approached the hangar at the airfield.  After we had been weighed and suited up, we were introduced to our tandem masters and the camerapersons who were doing our video.
And still no clouds in the sky…
After the four other attempts, I had imposed a media blackout – no-one was allowed to talk to me about the sky dive that morning, thus preventing a huge build up of excitement/terror, to be followed by a huge anticlimax/relief, if the jump were called off.
My tandem master was very nice, joking that he had only done this once before and telling me to pay extra attention to the video showing us the procedures so that I could tell him what to do, apart from “Don’t let go.”
Fiona and Bex, a Zimbabwean girl we were friends with, and our tandem masters and video cameramen all loaded into an extremely small airplane.
As we took off, I held on very tightly to the windowsill of the plane, my knuckles pure white. Grinning, my tandem master, unhooked my fingers and I had visions of him having to peel my fingers from the doorjamb when it came time to jump.
As the plane got higher and the ground got smaller, the fear abated.  At one stage, between eight thousand and twelve thousand feet, I actually said to my tandem master that the plane was very small and noisy, and I couldn’t wait to get out of it.  I think at this point my brain had gone on strike, like it was saying to my body, “Go ahead do what you like, but I am not getting involved.”  I went into autopilot.
Shortly after that, the doors opened. Fiona was first.  She went over to the door and vanished. I let out a wail.  She just disappeared so fast.
Then it was Becky and then me.
Sitting on the edge of the plane was surprisingly okay.  I was confused about which camera to smile at, wave at and maintain eye contact with.  Remember, my brain was on strike, so I just kept trying to get into the position for the freefall. The tandem master kept turning my head to this camera and that one.
Then in a blinding, stomach-whooshing, vacuum-breathing moment we were out, flipping over, back upright and flying.

The wind blasted past my ears.  I sliced through crystalline crisp air at two hundred kilometers an hour.  What a rush!

Somewhere between twelve thousand feet and eight thousand feet, I fell in love with my tandem master – even though I couldn’t remember what he looked like. The feeling of flying was so soul filling I kept thinking “Thank you.  Thank you.  Thank you.” But I wasn’t really sure who I was thanking.
The tandem master pulled the parachute. Then came my favorite bit.  Only when we slowed down to a graceful glide did it impact on me just how fast we had been going.

The tandem master asked, “Well, what did you think of that?”

All I could breathlessly say was, “Holy Majoley!”  Well, the brain was still sulking.

We floated over stunning scenery, chatting, with the tandem master pointing out the names of various mountains and lakes.  Mostly I didn’t answer, just grinned inanely and wondered if angels felt this way when they look down from heaven on a perfect earth. From up here you’re not close enough to see the rubbish that the up-close intricate detail shows.
The landing was uneventful and graceful enough for a first timer. I landed on my feet, and not for the first time since I’d embarked upon my travels.  After the dive I was a bit shaky, my brain obviously kicking back in.  I also saw my tandem master for what seemed like the first time.  Love affair over.  Brief but beautiful.
As if that wasn’t enough, the next day Fiona decided to do the Canyon Swing – a ten second free-fall for one hundred and nine meters, ending up in a swing across a canyon.  Bex, our fellow skydiver from the previous day, and I decided to go watch Fiona.  As it turned out she was the only one scheduled to do it.  She did it twice.  It looked terrifying.
Her first canyon swing began with her suspended over the edge. The jump guy gave Bex a cord to pull and some gave way beneath Fiona.  Hers eyes and mouth popped open with shock as she plummeted towards the canyon floor, but she loved it and came back for another one.

This time she did “The Chair.”  A plastic patio chair was strapped to her.  She was still safely snug in her harness and they balanced her over the edge backwards, like an errant pupil swinging on her chair, and then her let go.  Off she toppled, with fear etched into her face. I told the jump guys, who were whooping as she wailed through her free-fall, that they were “evil bastards.”  They took it as a compliment.
I was adamant I was not going to do it.  The guys working on the swing offered Bex and me a two for one deal.  I said no way… No doing it not even for free… But Bex was particularly low on money, so the deal was great for her, but the guys said if I didn’t jump (or at least pay or a jump), no deal.  What to do?  Bex really really wanted to do it… Guess what I did…. 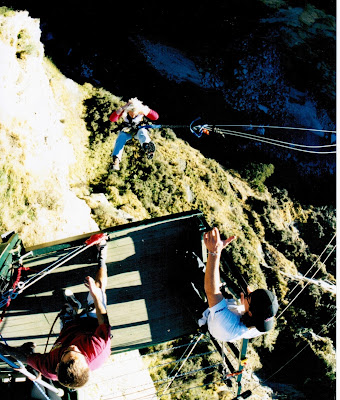 Ten minutes later I stood terrified with my back to the ledge, harness on, ropes attached, balancing over a one hundred and nine meter drop.  I decided to go off backwards, for something different.  Something different? How mad does that sound?  I stared into the eyes of the jump-master as he counted down.  I nearly bottled. I hadn’t had time to fully disengage my brain, but at the word “Go” I managed to somehow launch myself.  Fiona reckons my legs collapsed beneath me and for the second time in thirty six hours I was free-falling.
I roared all the way down.  It was so far that I had time to go “Arrrrrrrrrrrgh!” Breathe in and restart a new, “Arrrrrrrrrrrrgh!” again.  It wasn’t as violent as the bungee I’d done six months before in South Africa and the swing part was lovely, whistling through the canyon with the river beneath me.  I laughed at myself, replaying the scream in my head, as they winched me back up.  Anyway, once was enough for me.
I vowed no more free-falling for at least a year.  I was dreaming about it at night.

It had been amazing.  Not just the crazy stuff we were doing but the gang of friends we had gathered up was great too.  But alas, as with everything, it had to come to an end.  It was a tearful farewell between us as we moved on to our next adventure in life. Fiona promised me that now she’d had her skydive, she’d stay safe and sound inside her Air New Zealand plane on her way west to Australia.
I went to Milford Sound.  This was where some of the Lord of the Ring’s most spectacular scenery was filmed.  It had been raining for a few days and the fjord was just teeming with waterfalls.  I think I photographed most of them.
Queenstown was a huge party town and I was glad to be leaving if only for the sake of my liver.  There were many mad nights out and drunken adventures.  I won a bungee jump one night in the pub and resorted to having to “lose” the voucher.  I’d had enough adrenaline.

The weather here had been frustrating.  It was too cold to do much by way of outdoor pursuits but no snow for skiing.  A warm-up was in order.

After a disappointing lack of skiing due to the fact that it hadn’t snowed, I too decided not to hang around and headed back up to Auckland. I’d made friends up with a couple of sisters from Cork, Jen and Brid.  I arranged to travel with Jen and Brid to Fiji the following where I was hoping to meet up again with Bex.
I’d simply had a marvelous time in New Zealand but was looking forward to settling down in Canada for a while and living a tamer life.  No more jumping off bridges, out of planes and off the sides of gorges.  I was looking forward to the monotony of routine and some sunshine in the mountains.
But I still had to get through Fiji first.
I’ll always remember the toast Fiona and I raised our glasses to on the first night in Auckland.
“Why spend thousands of pounds on counseling when you can do this instead.”
Fiona was the best travel buddy I could have wished for.  We laughed so much and rejoiced in each other.

In New Zealand, I experienced freedom from my broken heart.  New Zealand was about rekindling the magic of a lost era.  I began to think and react like I had done as a teenager.  Not as a form of regression, but more by way of digging up old values and remembering things that I had forgotten I liked to do.
I saw the world as beautiful again.  Like I used to before I met my ex.  I used to love the sounds of nature; for example, rain tinkling down a broken drainpipe outside my window a musical sound, despite the exceedingly primitive digs I’d lived in as a student.  Sunsets made my heart ache before I’d even known what real heartache was.  I’d look at a velvet black sky, knowing that the stars were in fact real diamonds, placed there by God.  A spider’s web on a frosty morning was the manifestation of those diamonds on earth. The simple pleasures in life!
Back in my youth, my imagination had been free and innocent, before it became tainted by skepticism and cynicism.  Back in those days, I had believed in magic.
New Zealand and the friends I’d met there, re-introduced me to the girl I was before and I really liked it. I could once more cry, “I believe in Fairies” and know that Tinkerbelle would live. After all, hadn’t Fiona and I flown? We have the photos to prove it…

Next week – back to the present…like buying in dog food for Ninja, the mutant Rottweiler… you know, that sort of thing…