Day 5 Hanksville to Moab
Mileage 270  miles, States – Utah
Miles ahead of schedule 81 miles
Hanksville wasn’t much more than a junction and two motels. We hit the road and soon found ourselves traveling through the Glen Canyon, alongside the Colorado River on its way southwest to, what some would consider, its master piece – The Grand Canyon. 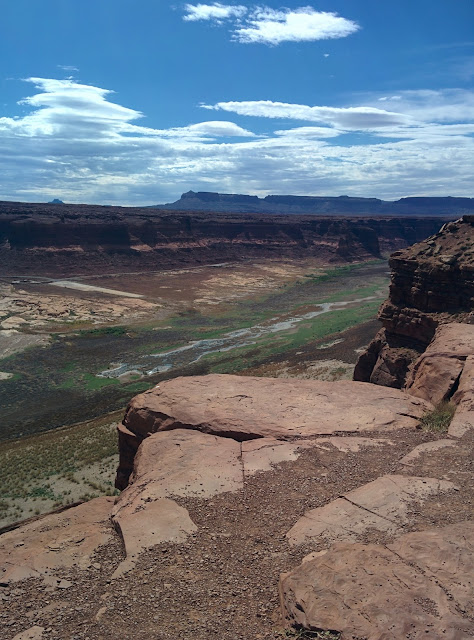 We forged our way up stream, eastward bound for Natural Bridges National Park. Any minute we were expecting to see a road runner and a coyote balancing rocks on cliff edges. Meep Meep! 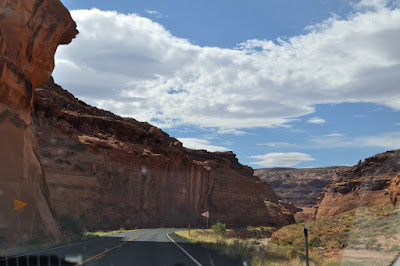 The views of rose colored cliffs, buttes, standing rocks, rock walls with hanging caves (sometimes called arches) continued to draw gasps of amazement from us such that our conversation for miles upon miles seemed to be a continued exchange of “Wow!” “Look at that!” and at one point “Oh God , I can’t stand it anymore – it’s too beautiful!” 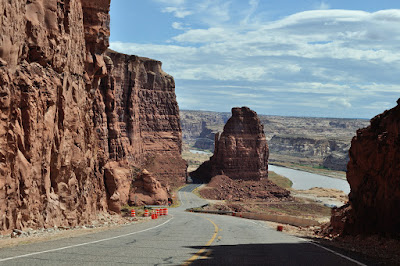 We made it to Natural Bridges around lunchtime which was unfortunate since it didn’t have a restaurant, or even a café. We did manage to buy a couple of granola bars and some trail mix in the gift shop. Luckily, we’d stocked the car with lots of water. We’d hardly starve in an afternoon, but dehydration is a real risk in these dry parts. 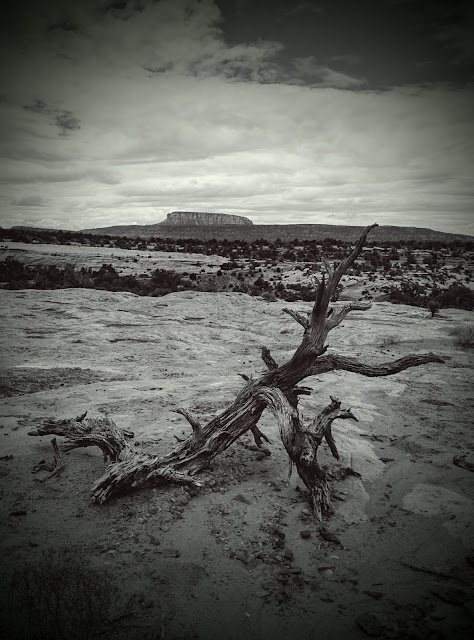 There are three bridges to view on a 9 mile loop. At each one you can take a hike down beneath them. This involves step hiking in often extreme temperatures. We chose to hike down to the first one we came to, Sipapu Bridge. 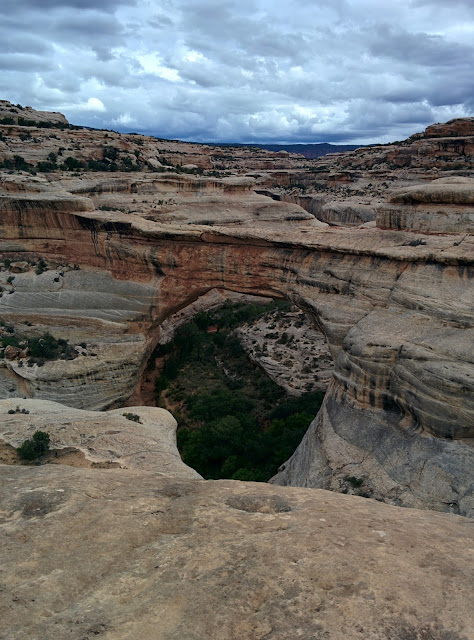 In places, it was so steep the trail was actually a ladder. 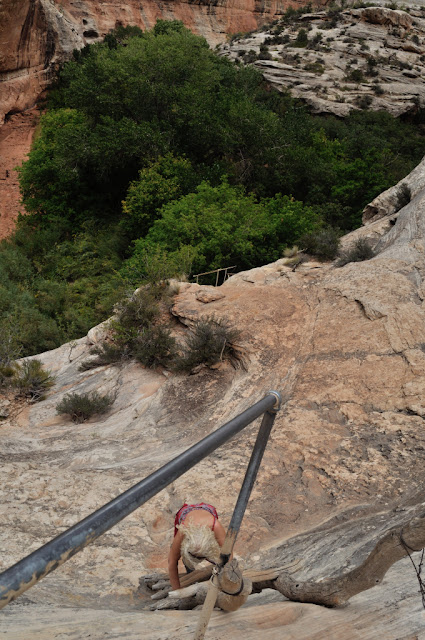 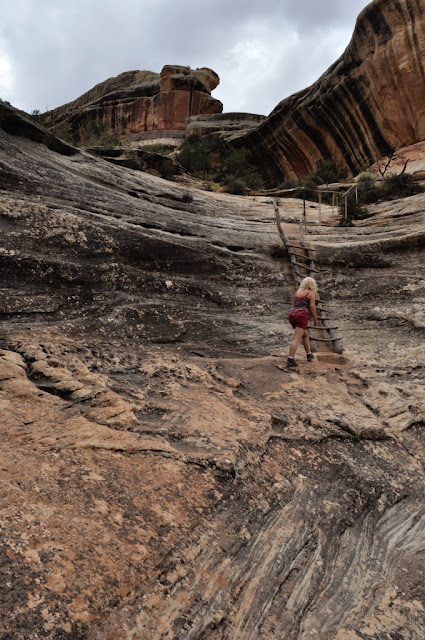 There were steep drop-offs. This trail sign tickled me. If you needed to be told this,you shouldn’t be hiking here!
I don’t have a good head for heights, but the splendor of my surroundings proved to be a great distraction, and I made it down to the bottom. (Going up was actually easier mentally, if not physically.) 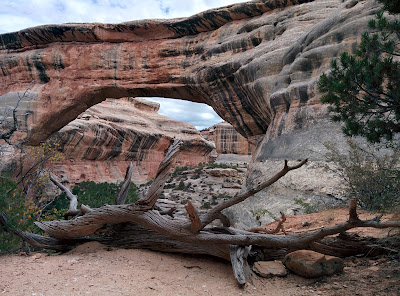 From here you could hike along an unmaintained trail to the other two bridges, better still if you had a second driver and set up a shuttle.
We hope to come back and focus more on hiking this area than driving next time!
From Natural Bridges we headed to the Needles, a more remote section in the southern area of Canyonlands National Park. This part of the park got its name from the rock pinnacles banded in red and white, with sculptured rock spires, arches and canyons. 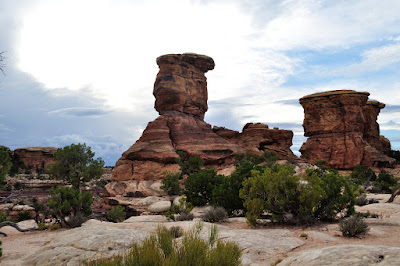 We had earmarked this as a possible camping night, but as we approached the park, leaden clouds gave a stunning backdrop to the terracotta red walls of rock we drove between. We’d watched the clouds all day, as fascinated with their shapes and colors as we’d been with the land they rolled across. Yesterday, we’d wished we were geologists, today we wished were meteorologists! Especially when we noticed that the undersides of the clouds reflected the red earth below, turning them pink even before sunset. 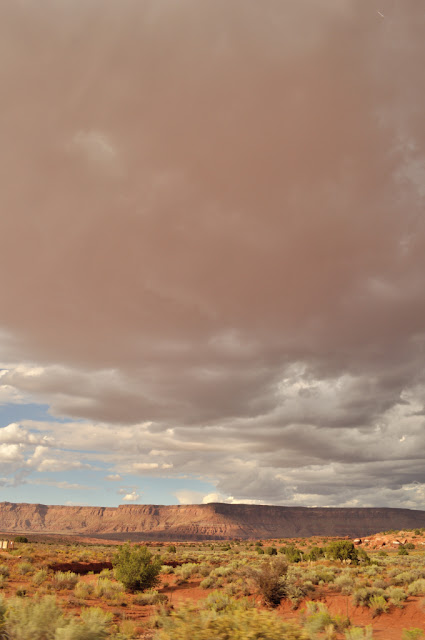 The most special moment in a day that had already set the bar high for special, was when a double rainbow sprung up, contrasted perfectly against pewter clouds above a gigantic red wall of rock. By the time we’d screeched to a halt (the road was empty so we just stopped right in our tracks) and gotten out, the double rainbow had merged into one with more vivid colors than I’d ever seen before. 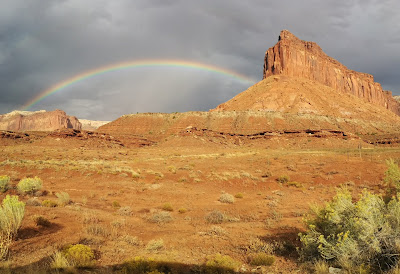 The storm clouds on the horizon swallowed what was left of the evening, leaving us without the sunset we had hoped for. Sprinkles of rain made us think twice about camping. Besides, we’d no food. It felt like we were on the “Drive Yourself Thinner” diet! 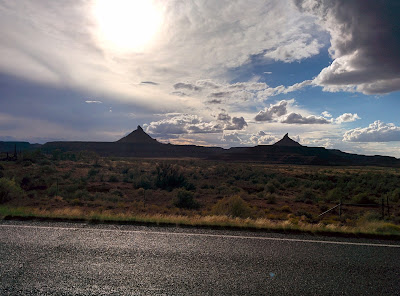 So we decided to break our “no road tripping in the dark” rule (well, rules are made to be broken!) and blasted the 81 miles straight to Moab. Once there, we’d have made up the miles we’d lost the day before and even have gained some, since that was our port of call the next evening as well. Two nights in the one spot! That’s a commitment, next thing we’d be checking out real estate…
As night fell, a bolt of lightning on the horizon lit up the sky in a yellow flash! What a treat. We continued to reel in natures splendor as another bolt cracked open the sky on the other side of us. Rain lashed the car, and the windscreen wipers got the best work out ever. We were so glad we weren’t camping! Another cloud, white and billowy, unlike the others lit up in a golden glow. This, My Husband told me, was an electrical discharge within the cloud. I’d never seen anything like it, more used to sheet lightening in Ireland and rarely seeing any in California.
We felt especially blessed to have witnessed this on the one evening we choose to drive in the dark.***Please see footnote.
As we approached Moab, described in the guide books as a happening hub for the National Parks in the area, the roadside motels all displayed a sign that struck dread into my heart. “No Vacancy”s all the way into town. My Husband got on the phone and began calling ahead too. Three in a row full – I could over hear the third one telling My Husband that the entire town was booked out. Would we have to camp after all? Would our tent even be waterproof enough? The next town, 50 miles away might be full too.
The forth call – the Riverside Inn said, yes, they had a room for $119 + tax. My Husband reserved it there and then, and five minutes later we pulled up outside it. It looked nice from the outside…but looks can be deceptive.
The lobby smelled strongly of “pine fresh” cleaner. I wasn’t sure if that was a good thing. We found our room and went back to the car for our luggage and noticed that the “No Vacancy” sign was now lit. We decided that if we were a Wild West outlawed gang our name would have to be the Last-Room-Lee Gang.
It might have been better than camping in the thunder storm, but the room was dirty, very dirty. The carpet felt tacky against bare feet. The sideboard was covered in food crumbs and there was some spilt liquid, now dried to a translucent syrup. And the bathroom – ewgh! Earlier, on the way out to the car I’d noticed not just a laundry room but also a bottle on Clorox on the shelf above the sink. I sacrificed one of the facecloths and set too cleaning the room. It’s amazing what a half cup of Clorox down the loo can achieve! It’s not the first hotel room I’ve cleaned before – I’ve done this in France, India, and Canada (but at least I got paid to do it in Canada!) and quite possibly it won’t be the last.
We settled in for the night, trying not to think about bed bugs and fleas and vowing to reform the Last-Room-Lee Gang.
Byddi Lee
***Footnote – by the time I got a chance to post this account, we’d learned that as a result of this same storm there had been a flash flood in Zion that killed at least 4 people, and 3 are still missing as of time of writing. 16 people died in a town called Hildale, just south of there in another flash flood. It’s hard not to feel guilty about enjoying the spectacle of the storm having now learned of its devastation. It makes you realize that nature really is (to steal a phrase from W.B Yeats) a “terrible beauty.”
I’d like to dedicate this post to the victims of the flash floods in Utah. May they rest in peace.
Filed Under : Canyonlands, Kachina Bridge, Moab, Natural Bridges National Park, Needles, Owachomo Bridge, Sipupu Bridge