I clearly remember the morning that I left Ireland to immigrate to the USA. I was nipping out to the corner shop (last time I’d do that for a while – no such thing in suburban San Jose!) and as I stood at the traffic lights waiting to cross the road, I examined my emotions. I was excited – so excited. I envisioned outdoor swimming, the heat of the sun on my back and lots of adventures. I shoved the sadness of leaving family and friends to a place where it would remain until I had the strength to explore that painful topic.

The green man flashed. A car, obeying the red light, came to a halt in the lane nearest the kerb where I stood. I took two steps in front of him and was just about to step further into the intersection when from the corner of my eye, I noticed a car barreling down the outside lane towards me. He was never going to stop on time. I jumped back out of the way as the car blasted through the red light and passed inches from me, my hair lifting in the wind his car generated. I ran back to the kerb as a police car sped through after him, blue light flashing.

Had I not stepped back, my story would have simply ended there…

The guy in the stopped car sat with eyes like dinner plates. I lipread one long expletive that began with an “f”. He pointed at me and mouthed, “You okay?”

I nodded. The lights turned green and I waved him on.

Trembling, I waited this time, not just for the lights to change and the green man to flash but for both cars to stop before I crossed the road, thinking all the while what a tragic headline it would have made in the newspapers.

It almost made me cry thinking about my Husband and my Mum (she was there to drive us to the airport) waiting in the kitchen for the milk for their tea, only to hear the sirens of the ambulance as they scrapped me off the road.

By the time I actually did get home with the milk, my active imagination had kicked in, and I’d played out the entire scenario…the wake (in my sister’s house in Armagh maybe) the funeral (the Cathedral in Armagh, of course – where else?) and my grave – beside my Dad who had only died a short 3 months beforehand. Perhaps it was no wonder that my mind was a bit morbid.

The thing with immigration is that, unlike dying, you get to come back – time and again. Though I know this is still not necessarily the case for everyone who emigrates because of financial reasons or maybe because their home country is unsafe. I really feel for people in those circumstances, and often think about the Irish Emigrants during the famine for whom returning to Ireland was practically impossible. For people like me, emigration is a luxury. I was one of the lucky ones with the right paperwork and passport combinations. I know so many people who would love to immigrate to the USA. Not to mention the millions of people in the world who are quite literally risking their lives to emigrate, some packed into boats trying to escape hardships beyond my comprehension.

I can’t compare with those hardships. But for me emigrating means, no matter whether I am here or there, I’m missing somewhere and someone. In order to be totally happy, I need to be able to be in two places at the same time.

This was never more clear to me than when I was back in Ireland promoting March to November.

It was a wonderful trip, filled with family, friends and book events. My home town Armagh has really become a great holiday destination. It’s always been a pretty city, with its majestic Cathedrals and it’s charming architecture, not to mention the people – great craic and so friendly. (Even if I do say so myself!)

But now Armagh has become a culinary delight, sporting many award-winning restaurants and cafes.

On my last day at home, my sister took me for lunch to a place near Market Street – where we had lived as small children – 4Vicars on Vicars Hill. 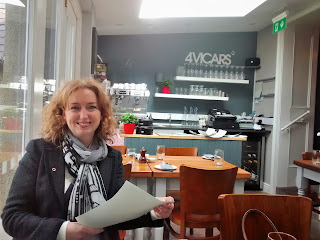 We didn’t play on this street much having been scared away by the ghost story of the Green Lady. 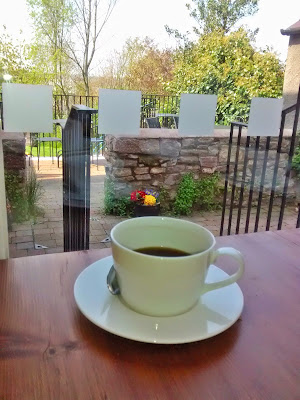 4Vicars is a fabulous place to eat. Not only does it offer a great menu with fresh, delicious food and beautiful decor, but you have a choice of scenery to view as you eat. If you sit in the front section you can have a table that looks out on the old cathedral. 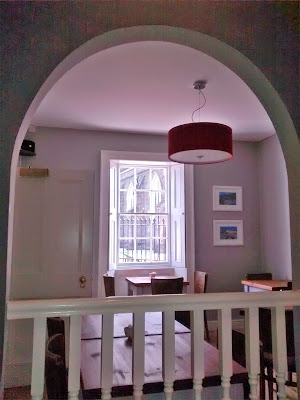 Or you can sit at the back and enjoy a view of Armagh. 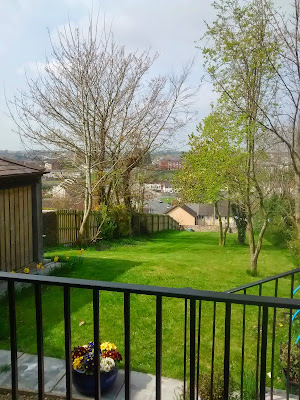 The red brick building in the distance is my old primary school, also sited on top of a hill.

I was thrilled to find this spot and even more thrilled to get talking to Kasia Reid, who owns and runs 4Vicars with her husband, Gareth. He is an Armagh local, but I could tell by Kasia’s beautiful accent she wasn’t originally from Ireland. She told me she was from Poland, and when I asked her if she missed home she simply said, “This is my home now.” She made it sound so easy, and I admired her commitment to her new life.

We then had an interesting discussion on the street names around Market Street. I’d been under the impression that Vicars Hill was not only the name of the street we were in, but that it stretched all the way around the cathedral to Market Street where the Bishops Residence was.

I never knew that, and yet I grew up on Market Street, and played in Castle Street, the street that borders the forth side of the square of the Cathedral’s property.

We laughed at how it had taken Kasia to come all the way from Poland to educate me on the street names of my home town.

We had a thoroughly delightful lunch there and I would highly recommend this place. I look forward to going back, because unlike Kasia, I’ve not been able to let go completely and miss my home town keenly. Especially now that it has such an up and coming gourmet scene.