When the weather is as good as it is here, you tend to use outside as another room or rooms. My grand plan for taking out the lawn involves creating a living room and a dining room outside. Eventually, I will also have an outdoor kitchen, whenever property prices increase and I can justify the investment, or I sell my book and become mega rich and famous, or I win the lottery!

The living room area will be where the lawn was, under a shade structure and bordered on one side by a dry creek bed. That will get started soon, but in the meantime I decided to get the dining room and the firepit area sorted out.

The dining room is the area right outside the back door, mirroring the dining area inside the house and close to the kitchen. Beyond that, the circular part of the patio provides the idea space for the fire pit.

Since so much of the back of the house is windows, I think it important that the furniture looks nice. The furniture we have right now is extremely practical. The table came from Ikea about four years ago. It can double in size, and I’ve comfortably seated 14 people for dinner around it. But the sun had weathered it to a dull grey/brown color. 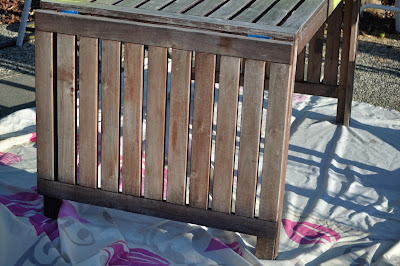 Same for the chairs, although they are comfortable, light and easy to move, yet still sturdy. The added bonus – all of them were free. 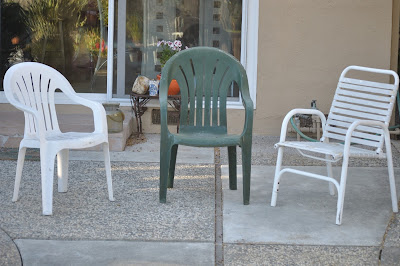 Four years ago, I fished two white ones (left in the photo) and four green ones out of the dumpster at our old apartment just as we were moving to the new house. The four tube metal white ones (right) had been set out for the taking on a nearby kerbside. So I had ten chairs all for free!

I need not feel guilty for throwing this all out and buying in some good stuff.

(In the photo above, take note of the rusty table in the background with the orange pot on it.)

I’d recently bought a bistro set for the front of the house to make the entrance more inviting. 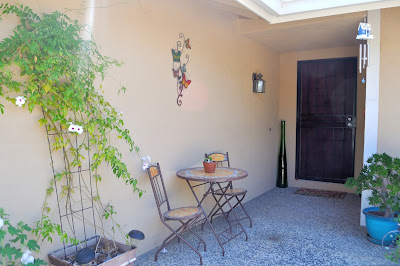 My husband and I had both loved the mosaic tiled table and chairs, but they were too small for what we needed in the back yard. 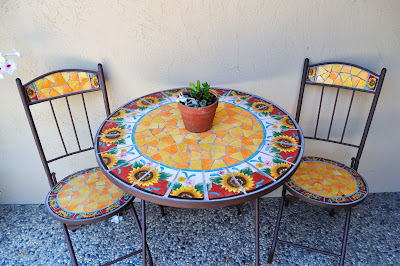 So I priced up mosaic tables large enough for a dining table….$2000 minimum and I still needed to buy chairs to match – $300 per chair.

We admired a friends beautiful wrought iron set that seated six people. The store that sold it no longer had it and other stores stocked similar items, but of lower quality at nearly twice the price – circa $1500. For me, that’s too much money for something I’m only half sold on.

My Husband suggested we should leave it and concentrate on the lawn area and hopefully the right table would come along at the right time.

I agreed – the furniture we had still did a great job – they just looked yucky.

And then I had a light-bulb-idea moment – Spray Paint – You can get paint these days to cover everything, wood, plastic, metal…anything.

I searched online and found some options. I decided to go to my local DIY store and see what they had. Lowes had the paint I was looking for but not in the selection of colors I wanted.

I had decided that I would really mirror the indoors outdoors. My kitchen, dining area and living room are all one room (referred to here as a “great room”) and they are pained in bright colors, mostly sunny yellow, with a touch of lime green in the kitchen behind the cook top. An orange rug warms up the living area.

Orchard Supply Hardware (OSH) had the colors I wanted – lime green, orange and sunny yellow in the  Rust-Oleum range.  I bought one can of each and they even had a special offer – two cans for $7.

This stuff is just pure magic in a can! 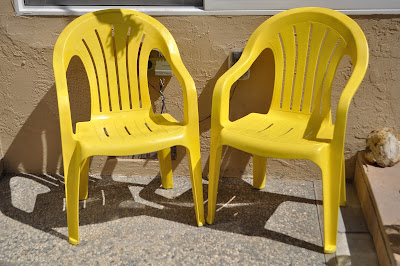 The color looks great and it is fairly easy to use. Covering up the white chairs was a cinch!

Then I tried to paint the first green chair orange and one can only covered half the chair! Still it was cheaper than buying a new chair, especially if I got a chair in the color I wanted for $7. I went straight back to OSH and bought seven more cans of orange (for the four green chairs) and a couple more cans of green for the table. The guys in the store were teasing me and warned they would be looking out for graffiti in these colors along the highways! 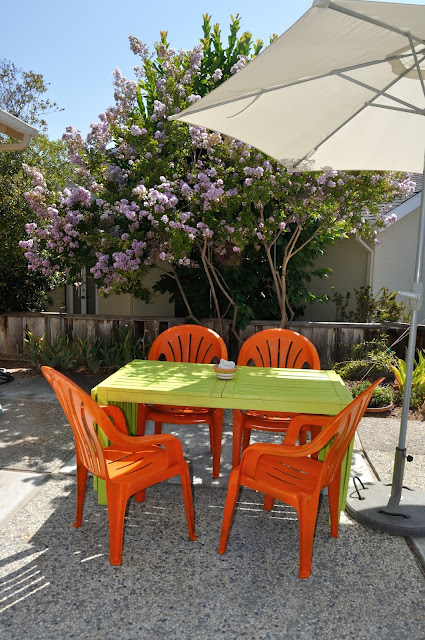 Then I decided I could tackle the fire pit chairs and settled on a nice purple for them after yet another trip to my buddies in OSH. The fire pit still hasn’t arrived, so for the photo I used a terracotta pot which is about a third the size of the metal fire pit I chose from amazon. I’m looking forward to shopping for nice throws to go with these. 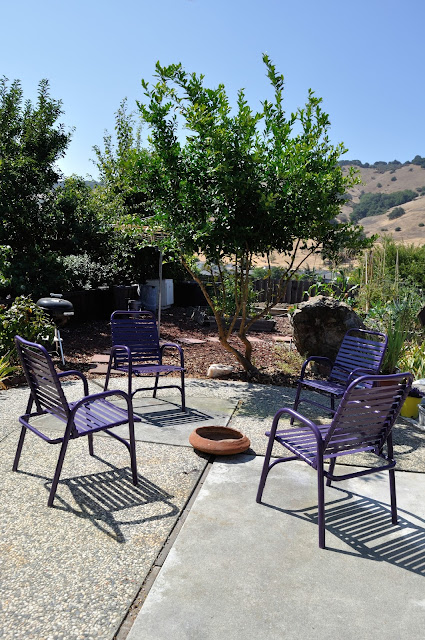 It was all so easy since I had a plastic tarp laid out already – the lawn solarization is technically done – the six weeks are up, and I don’t mind if the plastic tears now. It became the painting studio. I was impressed at how sturdy the plastic was after six weeks of sun exposure. 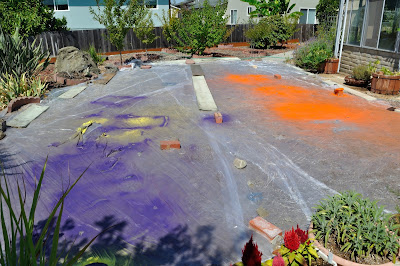 Here are some long shots of the furniture in situ.

View from the back door… 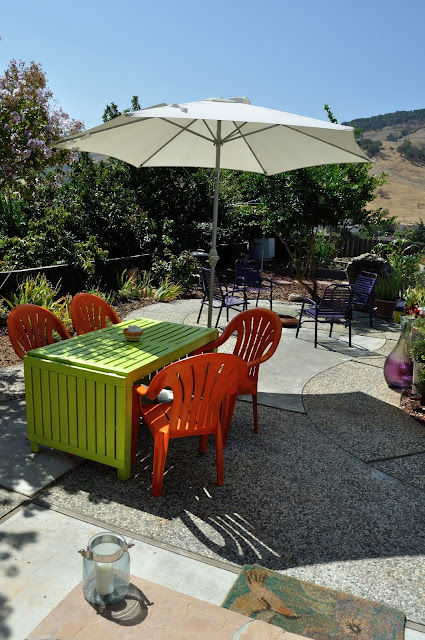 View from the raised beds… 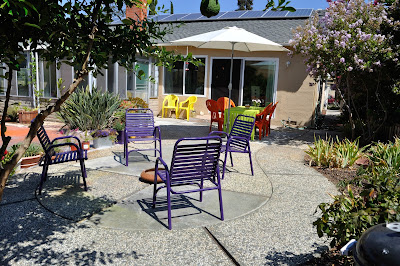 With the hills in the background… 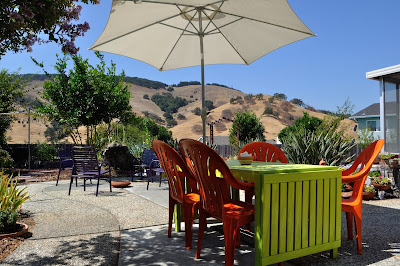 Then I began to experiment and painted a couple of pots. 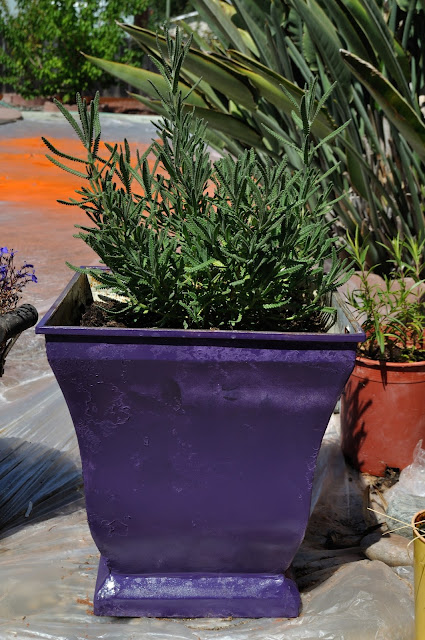 And even rocks… something about the color orange brings out the Armagh in me… (my hometown in Ireland for those who don’t know – our county team plays in orange and white.) 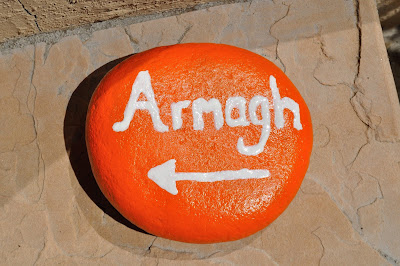 As I was putting the paints away in the garage, I discovered that I had at some stage in the past purchased a can of the same paint in silver…whatever I’d experimented on back a few years ago did not lend itself to this treatment, and the paint was shelved along with the project, much to my Husbands relief…but now armed with a new talent…remember that rusty wee table in a previous photo… 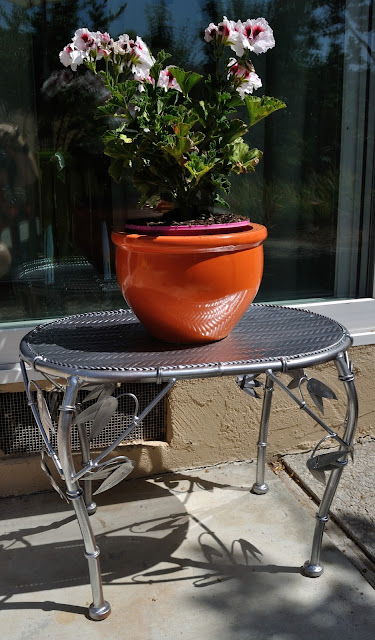 And won’t it be fun to buy a can in gold and scatter a few rocks along with these silver ones in my dry creek bed…well, it is California after all! 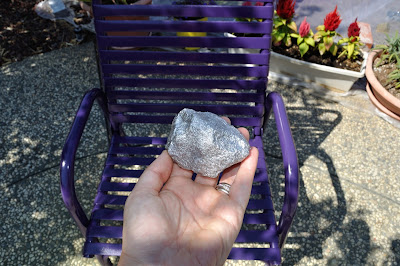 This post is dedicated to a good friend and  former colleague of mine who lost her battle with cancer last week. She was a very talented art teacher and I reckon she’s been whispering encouragement in my ear all week…just as she has done so beautifully many times for me in the past, giving me advice and support not only on matters of art but on life, love and happiness. RIP Kate – the angels are so lucky to have you XOXO

3 replies to Rooms without walls