For me, the latter means to use natives plants in your garden to show off their beauty and also enhance your habitat. If they use less water than your average horticultural plant then even better, but you do water them to keep them looking good, and you tend not to choose to let them go completely dormant as a lot of them do in the heat of the summer. If you have a drought year you will pamper these plants and help them show their best sides even in the hottest, driest of years.

And then there is having a Californian native plant garden. The idea was that I’d get these plants established – I babied them through the first couple of years and now they are on their own. I heard it quoted that this year has been the driest on record here. It’s not good for the native plants that are now fending for themselves in my yard.

Remember that the hot dry Californian Summer equates to the “winter” of the plants annual cycle. This is the time many go dormant, shed leaves, and generally look dead. The reason for this is so that the plant can conserve water and energy for the growing season which is sparked in October (hopefully) when the rain returns. It’s hard for many people living here – usually blow-ins from other parts of the planet – to appreciate that summer does not equal lush growth. The climate here is unusual in that it is one of the few areas on the planet where the warmest season is also the driest. The Mediterranean, South Africa and much of Australia share this phenomenon. 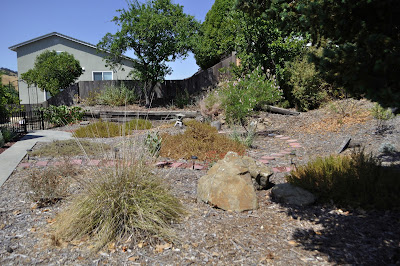 So this means that a native Californian landscape looks pretty dead in the summer. It’s tough to sit back and let a part of your yard do this. I decided that the whole idea of the native garden was to conserve water. Watering the plants now may even harm some of them. I’m sitting back and letting them do their own thing – apart from pruning and a bit of a tidy up. It makes no sense to me to give the yard extra water in the very year that water is so scare for all of us. Sure, I may be well ahead of the water conservation curve compared to folk who water lawns every day. I can imagine that many native plant gardeners will say that I could spare a little water to help them along, but the bottom line is, it’s all an experiment. I’m curious to see what will bounce back and won’t. 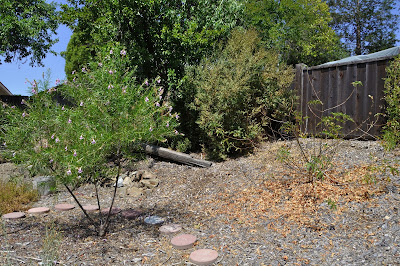 Already, I can see that some trees are perfect for drought conditions. In the picture above, you can see that I have a dwarf buckeye on the right. It has dropped its leaves as they do for the summer. It is still a little on the young side but it has produced some fruit.  In years to come, I’m hoping that will be what makes it attractive – thin branches, ending in massive chestnut-like fruit. Right now it’s doing exactly what it should be doing and I’m confident it will weather this storm – or lack of them!

To its left is the beautiful dessert willow. When this garden has matured, nether of these trees should be in full leaf at the same time, giving a sense of space to the area. In the summer the dessert willow will provide shade and color, and when fully grown should be about thirty feet tall. There are some great drought tolerant natives – its just a matter of finding the one that suits your needs.

While the majority of my plants look like they are burning to a crisp, the sages still smell wonderful and most growth will reignite with the arrival of the fall rains. I do plan to add a new batch of plants in the rainy season…if it comes. My choices may be partially governed by what survives the summer.

It is also worth noting that we really have only started the heat here… August and September promise high temperatures. With this extreme lack of water the plant phenology, in my yard and growing wild on the surrounding hills, seems to be at least a month ahead of itself. It will be interesting to see what happens next in my Californian native plant garden.

2 replies to California Natives in a hot dry year