For want of another name, I’ve been calling the 20’X25′ patch of grass and weeds at the back of the house “the lawn.” The weeds, burr clovers, dandelions, thistles and bermuda grass were mown and watered and from a distance provided a green patch where garden designers would say you could “rest’ your eye. On closer inspection it did nothing but cause me embarrassment. Something had to be done.

The options were to get someone in a re-sod the entire thing. Though I was pretty sure they would use chemicals  to kill the weeds and I’ve never used herbicide in the garden (once in the driveway a couple of years ago and that didn’t work!) And its expensive!

I’m a garden coach and a Master Gardener. Deep down I knew I had to tackle this myself.

So I can either kill all the weeds and resow the lawn seed, or design a beautiful sitting area with a gazebo/pergola covered in vines with a dry creek bed and some interesting yard art. The reseeding of the lawn would be cheaper but the latter so much more interesting.

Step one for either plan: Kill the Weeds

This can be accomplished by using cardboard and mulch. I’ve used this to good effect in the front yard but… well, I was feeling like a one trick pony since I always seem to be advocating that (probably because it is so effective.)

Recently I attended a Master Gardener talk on soil solarization. It’s used in the Central Valley and Southern California where the heat of the sun is employed to sterilize soil from both weeds and pathogens. The speaker seemed dubious as to how well it would work in the Bay Area since you need really high temperatures, but I am willing to experiment.

Basically you use clear plastic sheeting to trap the heat of the sun to super heat the soil. It is best done in the summer months June – August, where the days are long and hot. Needless to say – Do not try this in Ireland!

It can only be done where you get full sun. Shade areas will not build up the necessary temperature.

For more details on the theory behind it check out the note on it on UC Davis site.

There are 4 easy steps. (Okay, I use the term “easy” very loosely.)

1) Roto-till the soil.
That wasn’t as easy as I thought it would be. My wonderful neighbor, Al “lent” me his roto-tiller and then had to show me how to use it. I wasn’t very good at it so he just did it for me. I recommend saturating the soil well a day or two before hand since we had a hard time getting the blades into the hard dry soil. 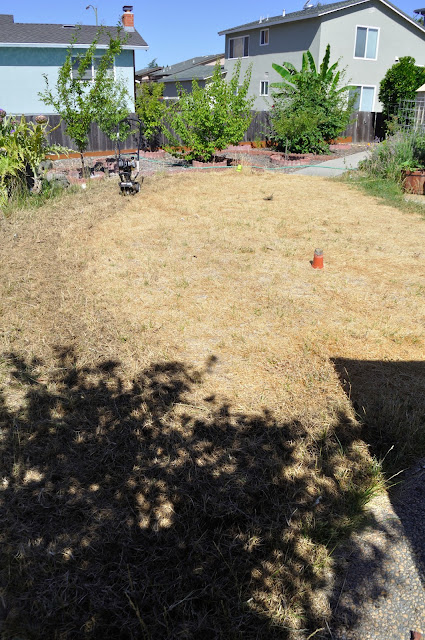 I’d turned off the water last winter so the ground was really dry.

2) Flatten the soil with a lawn roller.
I hired one from A Rental Center for $12 for the day. I did however flood the lawn the night before (having learned my lesson the hard way – literally!) so that the soil would actually shift and move. It worked well, apart from the fact that the bung for the roller broke (the roller is basically a steel drum that you fill with water.) Thank goodness for pink duct tape!

3) Saturate the soil with water.
The water will conduct the heat from the sun down into the soil – that and the compaction from the roller helps to transmit the heat energy deeper down. I really soaked the area.

4) Cover the area with clear plastic for six weeks.
I used the stuff you find in the paint section of the DIY store. The thinner it is the better. It needs to be tight to the ground – it helped to sprinkle a wee little tiny bit of water over it to weigh it down. Then you add a second layer. The gap between the two layers provides some insulation at night to stop too much heat being lost – though I am a little worried that the water between the sheets will lessen this effect. Di I mention that it wasn’t much water? We’ll see in six weeks. (Black plastic would radiate the heat out at night.) 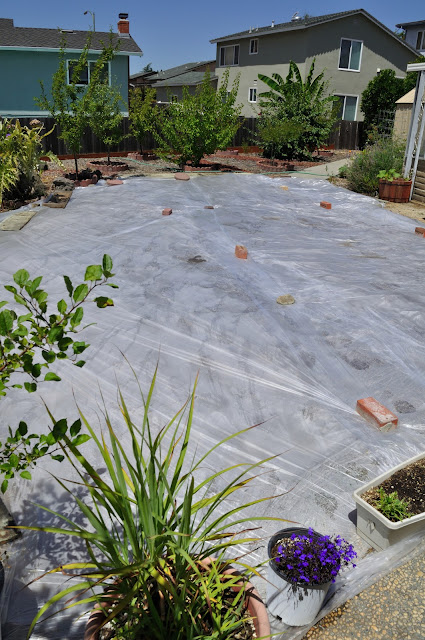 At that stage I can either resow a lawn or move forward with a nice shade area…but since we didn’t come here for the grass what do you think we’ll do?

7 replies to Solarizing the lawn