When we first moved into our house (and garden) in 2009 we inherited a lemon tree. Thanks to years of Mr Mow&Blow it looked more like a manicured privet. 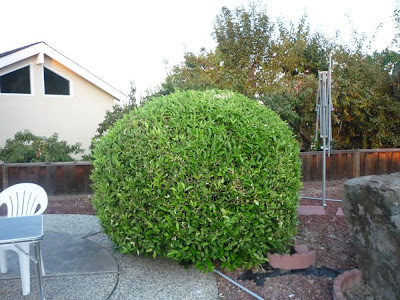 In fairness, maintained at this size it did not obscure the view. 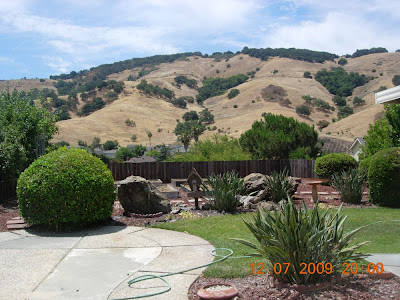 But the weekly shearing meant that it would never produce fruit. This was in dire need of a good pruning. After attending a Master Gardener talk on pruning, I took my lopers and got to work. It wasn’t easy as there are two inch thorns on this baby. Quite literally, the tree fought back. By the end of it I wasn’t sure who’d won.

My mother, who was visiting at the time was horrified at how I’d reduced the bush to four or five branches. Karla and Al, from next door, said, “Good job!” I wondered were they secretly thinking, “Good Lord what has she done!” 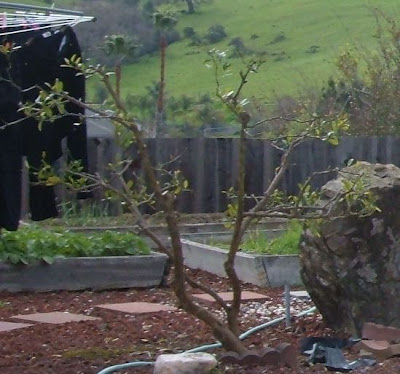 But nature prevailed and it began to leaf out. It even survived some of the devastating winter storms we regularly suffer here. (Snigger) 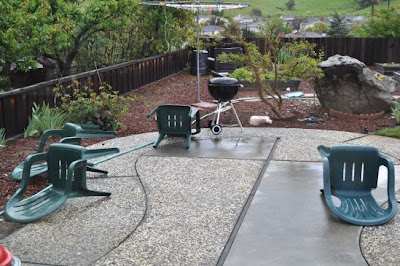 But the following year it produced so much new growth that it became a little top heavy. Then it was ravaged by another of our infamous winter blusters. 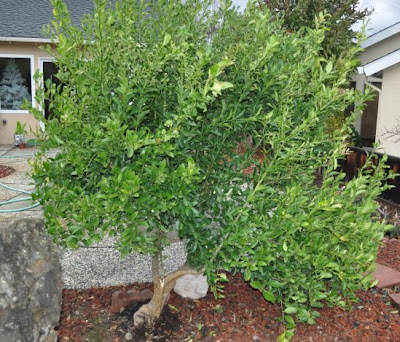 About a third of the tree was lost as a substantial branch split off. 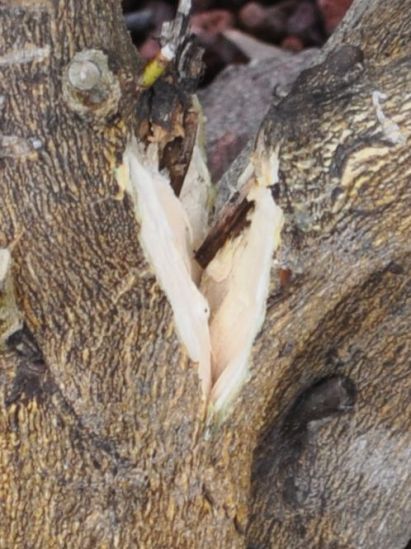 Not so much to snigger about now, eh?
By last summer the tops of the branches were one story high. No view, no fruit. And a list of ailments. The leaves were being chewed by an assortment of beasties, aided and abetted by ants.
This leaf shows a brown scale infestation. 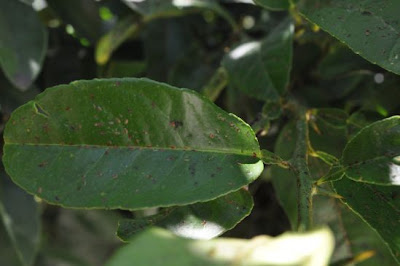 This one has leaf miner damage. 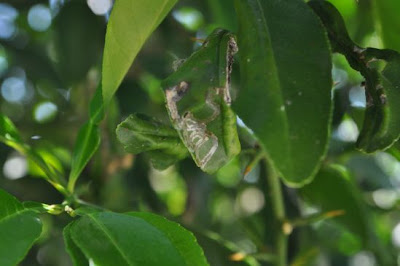 First we used tangle foot to stop the ants from getting into the tree. This was no easy task. The branches were only about a foot off the ground and the thorns were in full attack mode. It’s easy to hate a tree with two inch thorns that stab you even when you are trying to help it. I was threatening to hack the damn thing down and be done with it – plus we’d get our full view back. 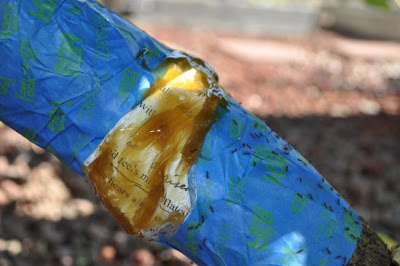 We had to control the ants because they feed of the aphids and scale and protect them form the gardeners arsenal of good guys. Here they are harassing a ladybug. 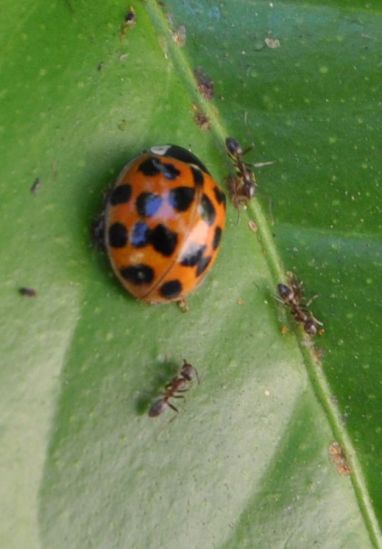 Then it was just a case of sitting back and letting the good guys do their job. The mealy bug destroyers moved in. 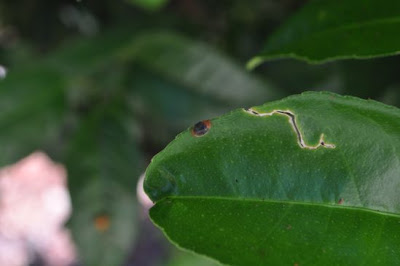 Their extremely cute white “fluffy” larvae equally as good at eating up the bad guys as mama. 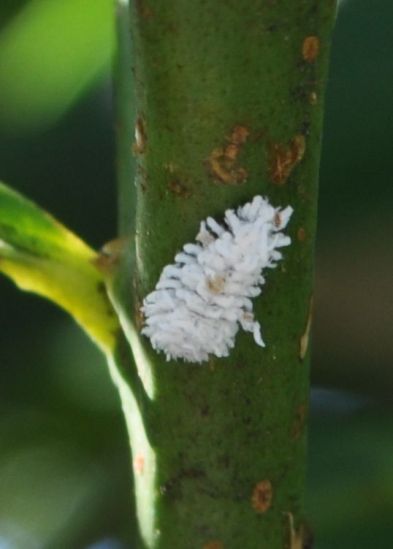 And just as I was threatening the tree with the chop if it didn’t produce any fruit this year we noticed a green swelling. 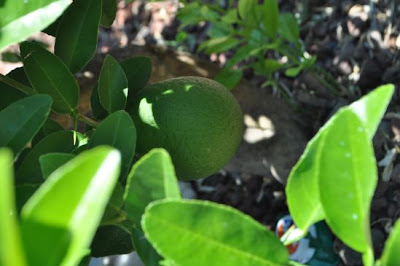 My Husband was so excited you’d have thought that he was personally responsible for it! Well seeing it was usually me nursing the war wounds from working with the vicious citrus! 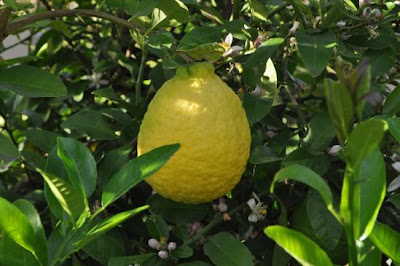 But I decided that we would keep the tree. It produced enormous fruit and I felt that I had won that round, despite the scars! 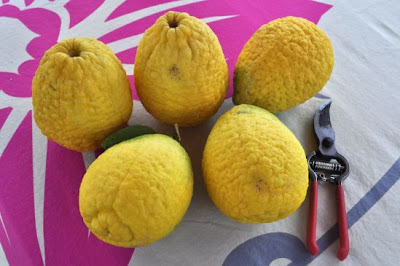 But the tree had the last laugh – these were Limoncello lemons, and as such, not very juicy and sour, sour, sour!
So today I decided that this tree will be a shade tree. I will prune it so that it has a bare trunk. I’ll let it get tall enough so that we view the hills past its trunk, beneath its canopy. The garden gets so much sun that  a shade tree would be great. I’m hoping it will grow tall enough. (If it doesn’t I’ll be turning on the chainsaw!)
The pruning today was more painful for me than the tree, but I trimmed of all branches less than 3/4 inch thick below the three foot mark. The cuttings pile looked alarming big. 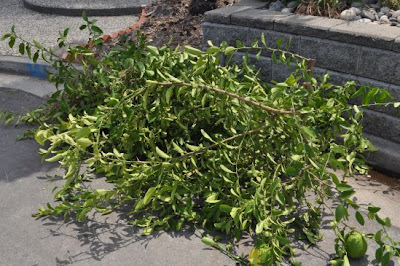 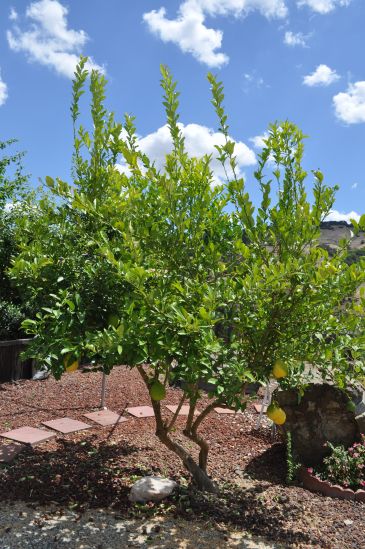 I’m looking forward to sitting beneath it in a hammock some day. But knowing that tree, it’s apt to drop one of those giant lemons on my head!
Byddi Lee
Filed Under : Uncategorized