We are promised rain tomorrow. It’s a little late for us though, as we’ve already trekked all the way to Mammoth and back last week to go skiing. Having prepaid for the hotel and booked the days of work, we couldn’t really sit tight and wait for the snow.

Usually during the winter the mountain passes across the Sierras are closed, so we had our route planned through Bakersfield, with an over night stop (prepaid through Expedia) there to break up the 8-9 hr trip around the southern end of the Sierra Nevadas.

Seeing how it hasn’t rained (which translates to snow in the mountains) since November, all the passes were open and the hills and mountain were bare but for a few frosty tipped peaks.

Refusing to be a “glass-half-empty” gal, I usually shove someone in the direction of the bar, or when I’m not being literal, I make the best of what comes my way.

Bakersfield seems to have a reputation for having nothing going on and is viewed as just a place to stay the night before moving on to bigger and better things. I’m not convinced that is fair, but since we did exactly what I described in the previous sentence, I don’t have a great deal of evidence to contradict that. I was surprised by the presence of those nodding oil drilling contraptions everywhere. Bakersfield has oil fields (as opposed to fields of bakers?!)

An unpleasant chemical odor pervaded the air and I was glad to be leaving that behind the next morning. It was good to be on the open road, this time in daylight, having left San Jose after sundown the day before. 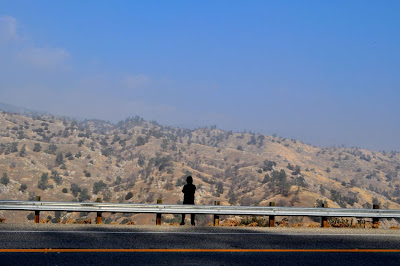 We drove through a swirling patchy fog out of Bakersfield taking a more northerly pass than we’d at first planned that took us past Lake Isabella. It didn’t take long for the sun to burn the mist off, giving us gorgeous vistas of the southern tip of the Sierra Range where it spread into the Mojave Desert. I can look at deserts the way other people can gaze over oceans and be soothed, awestruck and scared of its dangers all in equal measure.
We didn’t stop to take photos as we just wanted to get to Mammoth. But as we saw the moon rise over the desert (behind those mountains lay Death Valley) we had to stop for this shot. 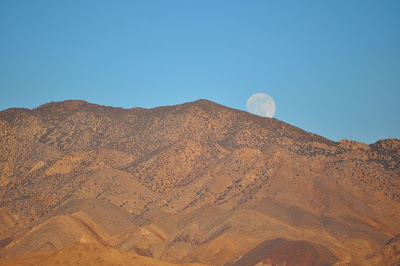 And about ten minutes later we stopped again for this one! Would we ever get to Mammoth? 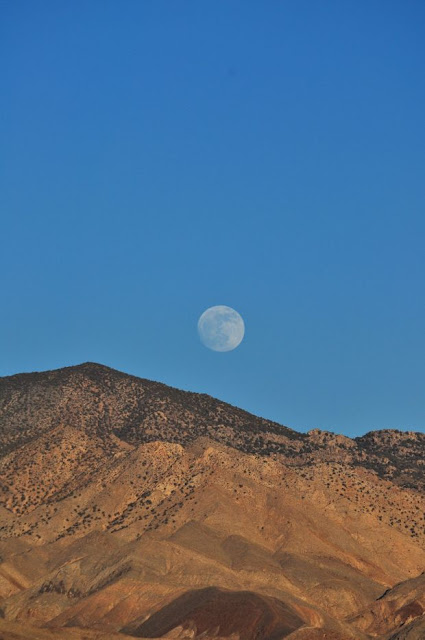 Night had fallen by the time we pulled up at the Mammoth Mountain Inn, our slope-side home for the next week. Ski-in ski-out if you didn’t count walking across the bone dry car park! During check-in we learned that there was man-made snow for skiing on and that enough of the mountain was open for the ski resort to feel justified in charging the full cost of the lift ticket. Trying to focus on being happy to be on vacation and away from the world for a week, I reconciled myself to the fact that this was not going to solely a ski trip.
The room was comfortable, the flat screen TV huge and I had Stephen King’s “Under the Dome” – 1000 plus pages of thrilling story telling from one of my favor authors. Having a great holiday was not up for negotiation!
The next day dawned with that headache inducing-glare that comes from sunlight bouncing off snow. (Snow? Where did that come from?) Brilliant blue skies and not a cloud in sight. But the lifts were running and did I mention there was snow?
The hill was quiet. We collected our skis from the ski valet (I know! Imagine not having to carry your own skis…) and went for lunch! Well, what was the hurry? Especially when you can buy a cheaper half day lift pass at 12.30pm AND spend the morning in bed with Stephen King! My husband was thrilled – he’s not a morning person.
The person at the information kiosk happened to mention two interesting things.
1 – Afternoon ski lessons included the price of the lift pass. A good deal at $90 for a two hr lesson and pass (which costs $67 for the afternoon),
and 2 – We’d have the instructor to ourselves as the place was empty. A private lesson for $23 each.
But not so fast. At the ticket desk we were informed that it was beginner lessons only for the afternoon. Having worked as a level one instructor many moons ago, I wanted to make sure we got at least a level two or higher instructor, so I chatted to one of the very friendly and accomodating ski school managers and he set us up with a great instructor for the same price as the beginner lessons.
We had a great afternoon swanning around the slopes. I was very impressed with the quality of the man-made snow. The temperature was low enough to make as much of it as they could and it didn’t melt during the day either. It stayed crisp and ski-able all day long. I’ve skied in much worse snow. 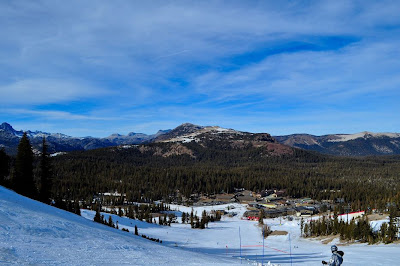 Notice how bare the surrounding hills are. Nevertheless, it was great conditions for being out on the mountain. No shivering on chair lifts, the temperature was comfortable and we had the place to ourselves. Our instructors gave us some great tips and, for me, reminders about bad habits I’d slid back into. My husband, who has only ever had one ski instructor – me, made great improvements. I could not decide whether to be happy about that or not!
The following day we spent the afternoon skiing all that was open. The top was only open for sight seeing so we did mostly blues and whatever blacks we could find that had snow.
It was evident that our ski holiday would have to mutate into a hiking trip. An idea we both embraced. It was perfect hiking weather. A trip to the tourist information office, loaded down with pamphlets and trail guides and we headed back to the room to plan the surprise “summer vacation” part of our trip we were lucky to be able to take advantage of.
The food in Mammoth is nothing to write home about, (we’re probaby spoiled by living in the Bay Area) but you can feast your eyes all day on the heart-achingly gorgeous scenery caused both by ancient ice ages and more recently volcanic activity.
At the end of Day Two of the ski trip I snuggled up in bed with Stephen King and looked forward to exploring the Mammoth area of the Sierras.
More on this soon!
Byddi Lee
Dorrington on Dwellable
Filed Under : Mammoth ski resort