If I told you that I found an earwig at between 5 and 6 inches would you be horrified? Well, here’s the proof… 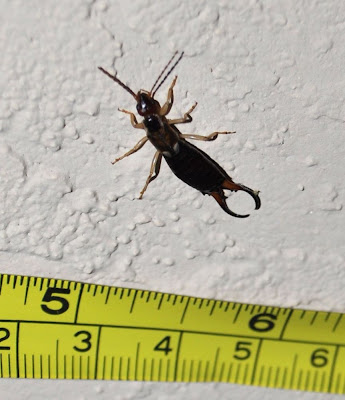 Okay – not quite what you were thinking, but this boyo is still plenty big for me. It’s the only photo I’ve got this week, so enjoy it!
The jury is still out on earwigs for me. Today I’m going to put them on trial and see if I can come to some kind of verdict.
Witness for the prosecution: Eighteen-year-old me.

When I first went to University, I came home every weekend, like the dutiful daughter that I am, to get fed, laundry done and a rest from the partying! My Mum looked forward to this weekly homecoming (far more that I realized at the time) and always had roses from the garden in a vase on my night stand, fresh bed linen on the bed, a fully stacked fridge and she brought me breakfast in bed every morning. Suffice it to say, she completely spoiled me.

One Friday evening I got home, and she was just making up the bed and I went to help. We lifted the pillow to put on the fresh pillow slip. Out from under the pillow scuttled about a dozen earwigs. Okay, maybe it was about six, but when they’re under your pillow exaggeration is permitted. After a lot of squealing and a dash for the door, we returned with a vaccuum and I pulled the room apart looking for signs of a nest. We had no clue where this infestation had come from, but I sure had a spotless room after that. For a while…

A few weeks later the same thing happened. Again the room was gutted, and I washed, vacuumed and polished until I was satisfied that I wasn’t going have have these things crawl into my ears and eat the alcohol-sodden remains of my student brain! We were flummoxed as to where these monsters were coming from.

Then one Friday my Mum picked me up at the bus stop looking quite sheepish. She had discovered the source of the “infestations.” They were, as she put it “her fault.” She’d lovingly picked roses, as she’d done every week for my return home, and as she set the vase on the night stand an earwig dropped out of the rose and scurried across the table top and dropped onto the bed, seeking the only dark haven it could find – under the pillow of course. As she stood there, another three joined its buddy. She’d been unwittingly seeding my bed with these guys every week! Although the pay out was that I’d never before keep my room so clean – so, a result for her. No more roses in the bedroom for me though.

Witness for the Defense:Penn State College of Agricultural Sciences

Witness for the Prosecution: Blonde me:
What about those huge pincers? That’s gotta hurt.

“They are harmless to humans and animals, although if handled carelessly, the earwig can give a slight pinch with the forceps.”

“…earwigs can cause substantial damage to seedling plants and soft fruit as well as to sweet corn. Damaged seedlings may be missing all or parts of their leaves and stem. Leaves on older plants, including fruit trees, have numerous irregular holes or are chewed around the edges. … Soft fruit such as apricots or strawberries may be attacked. … On stone fruit, look for shallow gouges or holes that extend deeply into the fruit. … On corn, earwigs feed on silks and prevent pollination, causing poor kernel development. Earwigs may also damage flowers including zinnias, marigolds, and dahlias.”

“They are voracious feeders on soft-bodied insects such as aphids and insect eggs and can exert significant biological control under some circumstances. In yards that are planted to turf and contain mature ornamental plants, damage by earwigs is unlikely to be of concern.”

Objection your honor – the witness is testifying for both sides!
Over-ruled!
(I think I’ve been watching too much of “The Good Wife.”)

Witness for the Prosecution: Me in 90 degree F heat
The compressor for our air conditioned stopped working this week. It just quit…dead. The temperature was in the nineties and my husband rang the air-con guys right away. We’d only gotten the air conditioning in about 16 months ago and I thought, “Typical! Just as the warranty is run out…” Fortunately, we were still under warranty.

Your honor – relevance?
Continue – but this better be good.

We spent the night sweating, with the all the windows open and listening to the hum of all the other compressors in the neighborhood. I was very happy to see Jim, the guy who had installed our system, arrive the next day. He checked the fuses, which my husband had already done. They were fine. Next he took off the panel on the compressor and took out what looked like the mirror that dentists use to look at your teeth – only bigger, and he looked into the workings of the motor.

“Aha,” he said, reaching for the forceps. “An earwig got in there and prevented the switch from turning on the motors.” And he pulled out an inch long flattened earwig.

He didn’t charge us for the call out

Your Honor, I rest my case!