Having waxed lyrical last week about all the beneficial insects my organic garden is attracting, it is with great irony that my post this week is all about finding a Black Widow spider in my shed. Not just in some deep dark furthest recess of the shed either but on a web spun right across the doorway.

I try not to kill spiders – they are extremely beneficial in the garden (and even around the home) killing pesky flies and gnats. Technically, the Black Widow doesn’t harm the garden either – perhaps just the gardener! I’ve always tried to catch the spider and release it outside if I find one in my house. (Actually, I wail that a spider needs recused and my husband does the rest!) Since moving to California and subsequently finding out that there are poisonous spiders here, I’ve taken a greater interest in identifying spiders. In Australia, I had a policy of “kill now, ask questions later”, but over there so many things bite and with poisonous bites too, I was a bit freaked out. I even got bitten by a pet bunny rabbit! Not poisonous but painful and totally unmerited – as I stood minding my own business, the deranged bunny just hopped over and sunk its two front teeth into my ankle. Ha! No wonder they brought in myxomatosis!

So this week, as I opened the door to the shed, a large black spider scampered along a silken thread. It was just about knee high, and I caught the movement out of the corner (or bottom) of my eye. When I looked down into the murky depths of the corner of the door, I could see a white egg sac and the spider crouching near it. I quickly ran back into the house and got a torch and the camera, stopping to put on the long lens – I didn’t want to get too close to that Mama!

When I got back she was still there. I took this shot but its not great – the adrenalin was pumping because I was fairly sure she was a Black Widow just from the shiny blackness, She looks like polished ebony. No other spider is quite as dark or as shiny. And I was scared! 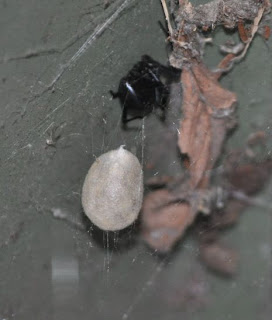 The egg sac was about 1.5 cm long and about 1 cm across. The spider’s abdomen was also about 1cm across.

Still not wanting to kill an innocent spider, I had to check for the red hour-glass pattern on the underside of her abdomen. How do you ask a spider to turn over so you can check out its tummy? I got a stick, a very long stick, a very very long stick, (I was afraid she’d run up it!) and turned her over. I thought my heart would stop when I saw the red marking. It was a bonafide Black Widow Spider with a sac full of her babies.

I tried to kill her, but the extra long stick was not easy to manipulate and she  escaped out under the door. I called the neighbors house. Dalton came over straight away. With teenage curiosity and lots of courage he cut open the egg sac – the nude translucent babies were busting out all over. 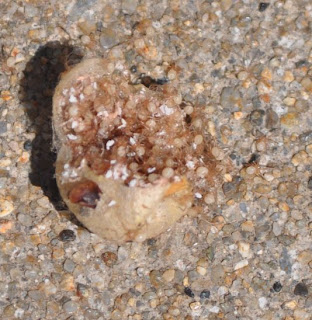 We killed them all. Sounds terrible, but I just didn’t want a whole colony of them setting up house in my shed. Over the weekend I intend to clear the shed of all cobwebs and try to implement more regular house keeping. Dalton was very calm and said that he’s seen a few and never gotten bitten.

Some facts about Black Widow Spiders:

Black Widow spiders will run away from you if they can. They are not aggressive but may try to protect their eggs.

Their venom is a neurotoxin and can kill but generally only if it bites children or the elderly. More information about bites can be found here.

Only the female can inject enough venom to actually do any harm, the males and the babies have such small amounts as to be considered not harmful to humans.

The Blue Mud Dauber wasp preys on Black Widow Spiders. Hope I find some of those in my yard.

The web is really sticky and feels extremely strong.

Good house keeping – keeping storage areas web free, vacuuming in the corners of rooms etc. and sealing up cracks in foundations can help prevent spiders from moving in. See the UC Davis IPM notes  or this article on HowToGetRidOff.com for more details.

Aternatively, you could follow the advice my sister gave me when I called her in Ireland to tell her of my find – “Go inside, lock the door and tuck your trousers into your socks!”

Since she’d been complaining bitterly earlier that day about the rain they’d been having, I hadn’t the heart to tell her I haven’t worn socks in months, and that anyways I have none long enough to reach my shorts! But then again – raindrops don’t bite…