Baby sweetcorn is vegetable I’ve had a hard time finding here. Typically used in Asian cuisine, especially stir-fries, it brings a delicate taste and interesting texture to a dish. While I lived in Ireland it was on my weekly shopping list. Usually Sainsburys sold it in combination packs with mange-touts peas or runner beans. It is an expensive vegetable but one we viewed as a healthy indulgence.

Last year, I had little luck growing its bigger relative, the standard sweet corn. I’d been warned that it is tricky. You need a large number of plants for pollination – It is wind pollinated so our garden helpers, the bees were of no use. I filled half of one of my 5’X8′ raised beds with a stand of corn. It looked mighty impressive as it grew tall over the summer. (Though not as tall as Al’s corn!) But for some reason, most likely poor pollination, only three ears matured, and they tasted horrible! Perhaps a different variety would give me a better experience, and one set of results does not make a sound scientific conclusion.

I vowed never to grow sweetcorn again, but when a packet of seeds for baby sweetcorn turned up at a Master Gardener seed swap, I thought, “Why not try this?” It was, after all, a long way to Sainsburys!

The seeds were nearly ten years old, and I didn’t hold out much hope for any of them even germinating. I planted the entire packet – about 40 seeds. 12 germinated. I planted those out in a raised bed and they grew slowly, as if it were a great effort to do so, but they still did get bigger. Eventually, they produced the flowers that bear the pollen, and along the sides of the stalks the silks appeared – the hair-like female part of the edible cob. Best of all, each multi-stalked plant gave rise to, on average 3, cobs per stalk, and in theory can yield much more, according to seed supply companies. 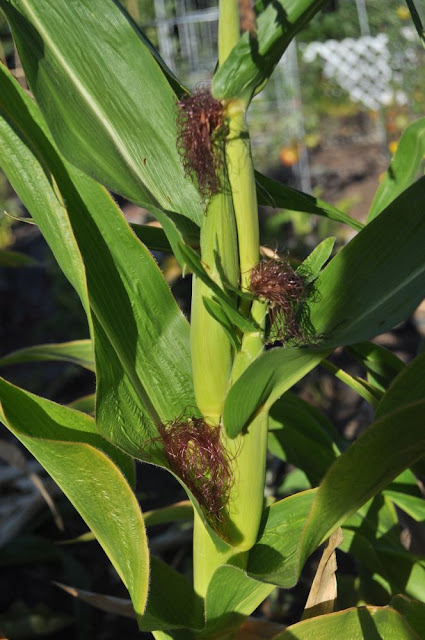 The corn needs to be picked about 5 days after the silks appear. I found this hard to keep track off because they didn’t all appear at once – really seeds ought to read the packet as well, so they know what is expected of them!

One harvest yielded about half a dozen finger length cobs – roughly what you’d get in a combo-pack from Sainburys, and enough for one stir-fry. 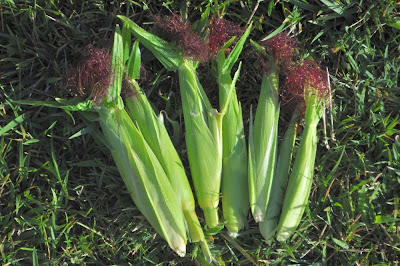 They are really fiddly to shuck and it took ages to get the little cobs out. Now I appreciate why they were so expensive to buy.

They should look a little under developed because you eat the entire thing not just the nibblets, so it needs to be tender. A few of ours were a little too old and you could hardy bite through it, but the others tasted great. I’d have had a greater yield if I’d harvested earlier and more often – like runner beans. 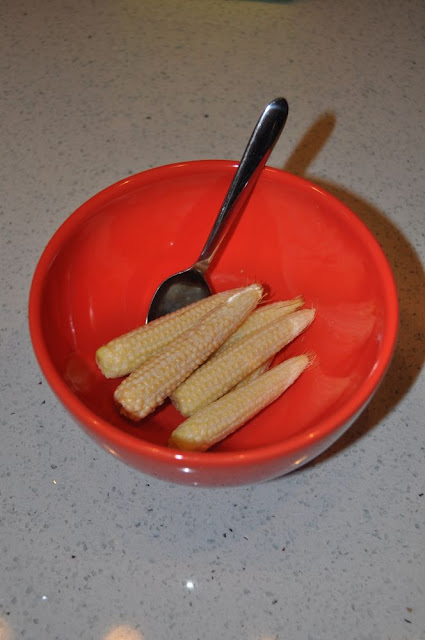 That is an average sized tea spoon in the photo to give you an idea of scale. They can be eaten raw or cooked – steamed or stir-fried. You can add them to stews or roast them also.

I didn’t pull out the stalks as I harvested though some did break. Those that remained produced more silks, and I had a second harvest – so compared to the big corn, I had twice the yield, i.e. two dinners worth! And that was with old seeds – imagine how much better fresh seeds might be.

When I checked yesterday, I found one more silk developing – I don’t think we’ll get another dinner from it! Perhaps I should let it go to seed.

So which is best to grow in the home garden?
I garden to grow tasty, healthy food. As an added bonus it is usually cheaper than buying organic, locally grown food, so the bottom line is this – economics.

It costs more to grow the large sweetcorn than to buy it in season (and the bought stuff tastes great). The baby sweetcorn is cheaper to grow than to buy. Also I get a kick out of having a Sainsburys aisle in my back yard as I stop to pick runner beans from the next raised bed to complete my “combo-pack”.

So for me its baby corn all the way! What say you?

7 replies to Something a little corny.