From the day we moved to this house, I wanted to tile the back doorstep.  It was covered in fraying green plastic that was supposed to resemble grass.  It was lifting at the corners and becoming a hazard, so last week I took the head staggers and decided to get the job done.

I asked my neighbor, Laurie, if she would come with me to choose the tiles.  I had it all worked out.  The doorstep was only 3 feet by 5 feet so we would need 15 tiles.  I was sure it wouldn’t cost that much. When we got to Lowes, I spotted a lovely 2″ square mosaic of different colored stone tiles.  Even easier, we thought, because it gave us some wiggle room and they were sold on a 12″ square plastic backing which was easily cut so no horrific grinding and cutting of tiles – not to mention having to hire all the equipment etc.

I actually did a Saturday tiling class a couple of years ago, back in Belfast, and the one thing I learned – do not undertake tiling lighting – it is a tricky job, and you can waste a lot of money if you mess things up.

However, deaf to my own advice, I started to get fancy. There was a 1″ square tile in the same variation stone effect, and I reckoned it would make a lovey trim.  Sure we could just cut the bigger squares off and replace it with four of the wee tiles.  Laurie and I planned it all out on the floor of Lowes, (I’m sure the staff loved us!) called her husband, Ray, a few times to get advice on types of adhesive (formerly called tile-glue by yours truly) and grout, and I hyperventilated about the cost of, well, just about everything!

Nearly $200 later, we were on our way home thinking, crikey – if a 3’X5′ foot doorstep cost this much, how much more does a full kitchen floor cost…and that’s only materials.  I was to be the labor!

But it was going to take more than just my labor!

Unlike the rest of the country, Saturday morning broke sunny, warm and clear.  I began at 8am, my morning mojo having pulled me out of bed early with the thrill of an easy, fun project.  My morning mojo is dumb!

Ray had taken one look at my doorstep the night before and told me that under no circumstances was I to apply the adhesive until I had cleaned the old glue off.  I thought, how hard can that be?  Especially as Ray had lent me all his scrapers and tools…

Two hours later, fighting back tears of fustration the doorstep still looked like this. 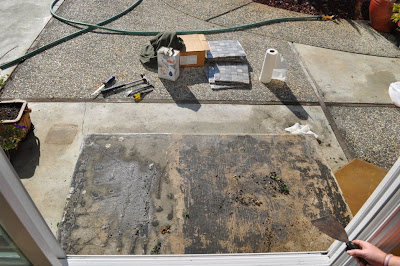 By this stage I had employed the use of paint thinner, horrified at having to use chemicals in my garden albeit on the concrete.  I moved my patio containers far out reach of any run-off, but I wasn’t happy about using this stuff.
At 10.30am Ray and Laurie (bless their hearts) called in to see how I was getting on.  I asked Ray if I’d removed enough of the glue, but he said (he’s in the construction busuness so I was inclined to pay heed), “Keep going until you get to the bare concrete.”  Followed up with, “And you need to put tiles on the side too, or it won’t look right!”
It was one of those moments where you can like someone but hate them too.  Laurie held my hand as I cried all the way back to Lowes to buy more tiles!
After we came back with more tiles and I resumed scraping, Laurie said she’d go home, change and be right over to help.  My husband couldn’t help – back problems and work commitments gave him an out.  But Laurie came back and brought over another of our friends, Christie. We three girls sat and worked on the doorstep, pouring paint thinner, scraping off gunge, generally inhaling the fumes, and getting giddier and giddier!
But still the step was not clean enough.  It was now lunchtime and not a single tile yet laid.  Ray, by general consensus the supervisor of the project, tried a wire brush…still too much gunge left behind.  Then he disappeared and returned a few minutes later with an electric sander.  He was bringing out the big guns – Hooray for power tools! 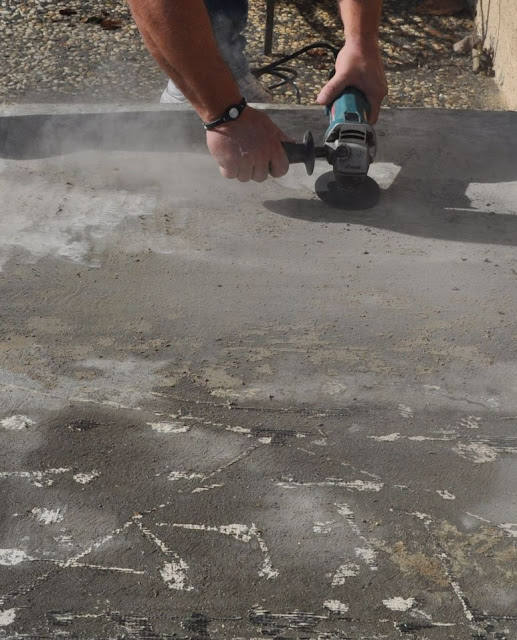 And twenty minutes later we were ready to lay tiles!  Laurie’s Mum and Dad arrived over at this stage and Karla (our neighbor on the other side, who helps me weed) was observing from the safety of her back yard.  I think at one stage we had 8 people all looking at the doorstep.  At which point I said, “It’s not quite a community garden, but I think it does qualify as a community doorstep!”

I liked this shot of our hands all working together. 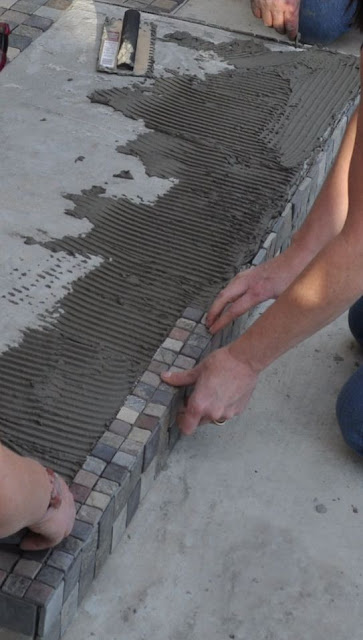 Notice the bowl of roasted almonds in the corner that Laurie had brought over – a boost to our energy levels and moral! 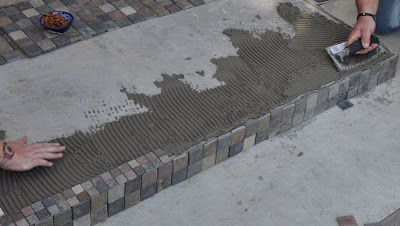 The actual tiling took no time at all.  Ray had to cut two or three tiles on the vertical sides with a machine of some sort that he had at home – a job he did with minimum fuss, as if he were cutting soft butter with a hot knife…it’s a task I fear and hate, so Ray was reinstated with hero status…actually he never really lost that throughout the project, though us girls had not relished being told to get the doorstep cleaner, and those tiles around the sides – well they made the project look so good, so professional, yet at the time of first mentioning…

I left the tiles and adhesive to set and undertook the grouting myself on the following Monday.  I was terrified I’d mess the entire project up single-handedly – especially when you put the grout on (left-hand-side of picture below) and it looks like this.  But one wipe with a big sponge and you start to see it come together… 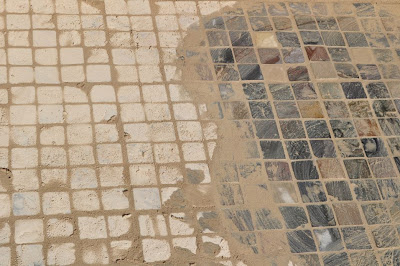 And the finished project makes it all worth while. 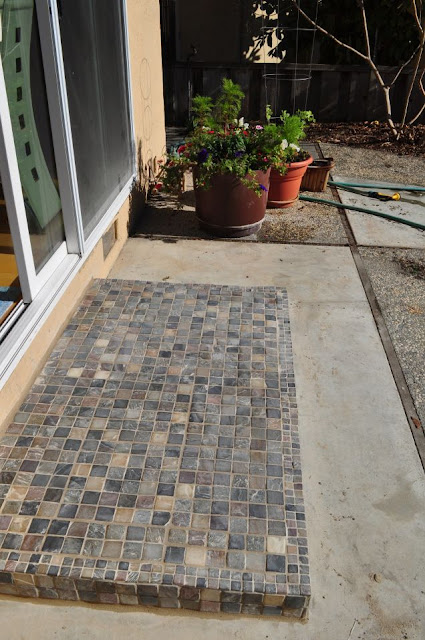 Our community doorstep symbolizes the home we have made here and will always remind me that we are lucky to have found such wonderful friends and neighbors in our new life in California.

3 replies to Not quite a community garden!