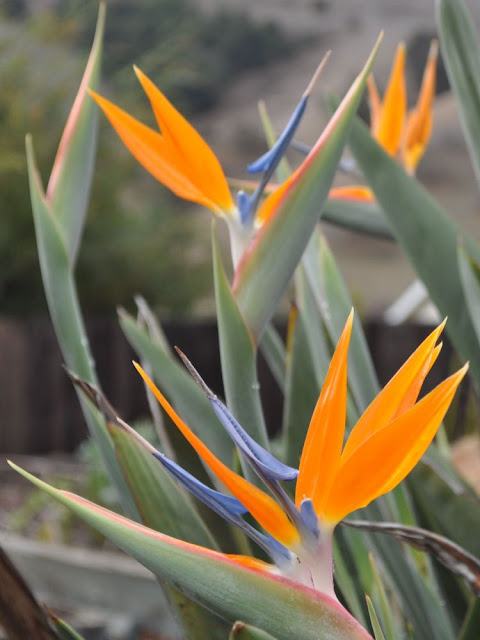 It’s that time of year again – the Birds of Paradise flowers are blossoming, capturing the winter sunshine and giving it an extra vibe. The pomegranates are ready to harvest, though this year, we’ve had a disappointing crop.  Here is a picture of exactly two thirds of the produce. 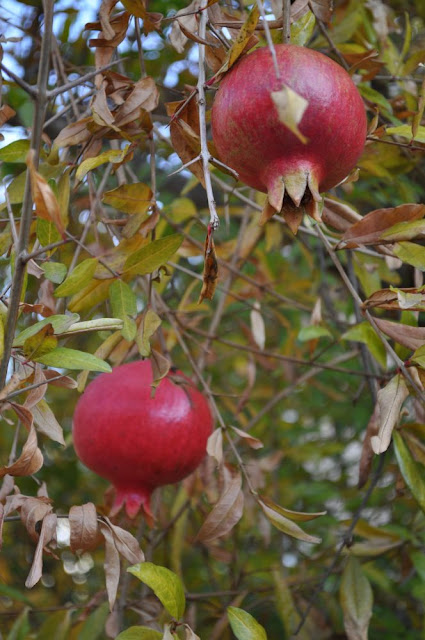 The other third of the harvest was consumed when my Mum came to visit.  Last year, we had heaps of fruit from this tree, and I made juice and jelly.  The kitchen resembled a crime scene afterward, with all the splashes of the red juice. I pruned the tree in late January, and the leaves flourished during the spring and summer.  We even had quite a few flowers, so I don’t know why the crop failed.  My guess is that it may have been due to the unseasonably cool summer we had, or a pollination problem as a consequence of that weather.  What ever happened, we only got three pomegranates!
On the up side, the lemon tree, that I vigorously pruned last year, has blossomed at long last. 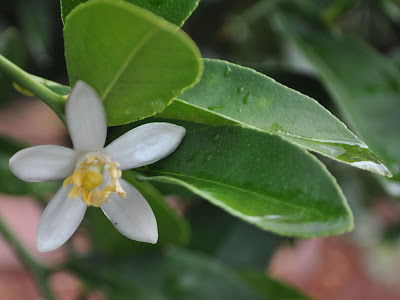 I had threatened to cut it down and replace it with one of my cherry trees.  It obviously overheard me – there really is something in this talking-to-plants lark.  My orchids are thriving now after that showdown!
The orange tree is laden with fruit too. 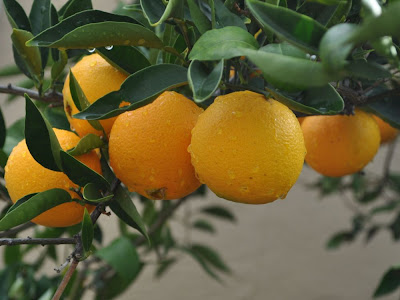 We have tried some, but they are still bitter.  Last year, we didn’t harvest them until January, so we will sample one each week until they are how we like them.  When we harvested them last year, we were able to eat them from the tree until March, but then we had a glut of them.
Unwilling to let them go to waste, we spent a day picking, peeling and juicing them, then froze the juice.  The orange pulp looked too nice to throw away, and I didn’t want to waste it, so I froze it until I came up with a use for it.
Californian wheaten bread! 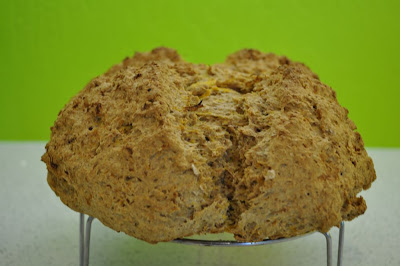 I adjusted a recipe that I use all the time for (Irish) wheaten bread (in the US it may be referred to as brown soda bread).


(sudden jarring may disturb the developing carbon dioxide bubbles that help it rise)450o F for 10 minutes.
9.   Then, turn the oven down to 400o F for 35 minutes.
10. Tap the bottom of the loaf – a hollow sound means it’s done.
11. Put on a rack to cool.
12. Serve with butter (ideally melting and dripping of the bread), homemade Meyer lemon marmalade and a big mug of Barry’s tea.

If you don’t have orange pulp substitute with a half cup of oatmeal and another cup of the milk.  It is a very forgiving recipe.  The bread should be heavy – not light and fluffy.  It can also take the addition of raisins or for a savory touch Jalapeno peppers – basically, experiment then share your conclusions!

7 replies to Irish wheaten bread with a Californian twist