We were in shock. My husband’s work gave him the day off on Columbus Day.  The only appropriate thing to do on such a day is go exploring.

Lick Observatory sits on top of Mount Hamilton, and on a clear day (which is most days) you can see its white dome glinting in the sunlight from nearly anywhere in the Santa Clara Valley.  It often seems closer than it is but after a hour long, hair-raising  (and for some stomach churning) drive you finally get to the top. The views of the Bay Area are stupendous.  The observatory has a tour of the telescope and is a great spot to simply dander around.  Check out the fabulous photographs of the observatory on snowy days in their picture gallery.

We’ve been up to the observatory a few times now.  In fact, before we even moved here, we visited whilst on holiday, and the views were one of the things that made me want to come live here.  The absolute vastness of the landscape from up there made my spirit soar.  And yet, it is so close to civilization and Starbucks. (Actually, I much prefer Peets!)

On each occasion, as we turned to go back down the mountain to San Jose, I would eye up the road that continued on over the mountain.  What was it like over there?  On the other side of the Hamilton range? In the depths of the Central Valley?

On Monday we decided to find out.  Here is the map of our route – taken from Google Maps and amended by me. 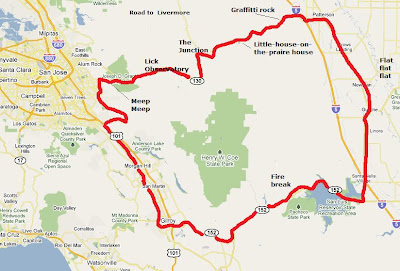 On our way up the tortourusly twisty turns, a strange bird ran across the road in from of us.  It had long thin legs, stood about a foot tall, with a distinct crest on it’s head.  It sprinted with it’s head forward, and I recognised it immediately.

Meep meep!  It was the Road Runner.  All we needed now was Wiley coyote, some TNT and a dab of Acme glue.  My husband took a bit of convincing that there were actually such birds outside of the cartoons. I showed him pictures on the internet when we got home. I didn’t get any photos – the road runner was too fast.

However, we weren’t so fast.  The road spiraling up the mountainside soon saw to that- this road sign is echoed in the road behind it. 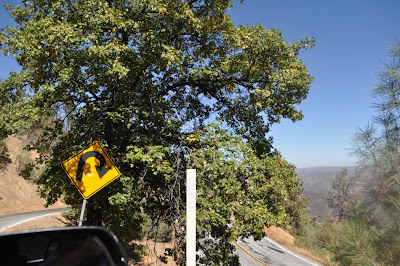 Because it was a road trip, a lot of the pictures were taken from the car as we drove along.  It was simply too hot to get out…and I was feeling too lazy.  But I still got some nice shots of the view and the steepness of the drop away at the side of the road. 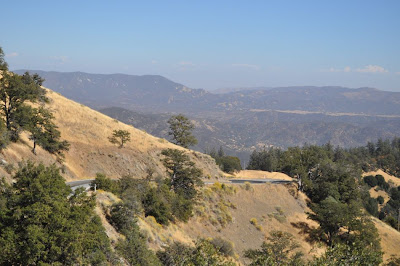 We only stopped for a moment at the top, eager to be on the descent into new terrain. The steep roads plateaued out into high valleys.  Sweeping swaths of grassland were dotted by huge oak trees in a gold and dark green color scheme, complemented by the blue sky.  See for yourself – 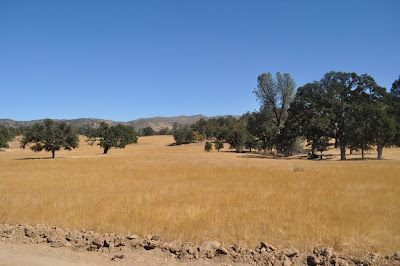 I’m not sure why this farmer felt the need for a road here… right beside the public road. 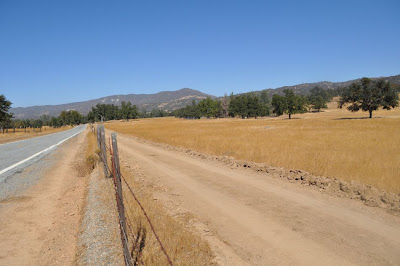 Perhaps he didn’t approve of the speed limit on the public road. 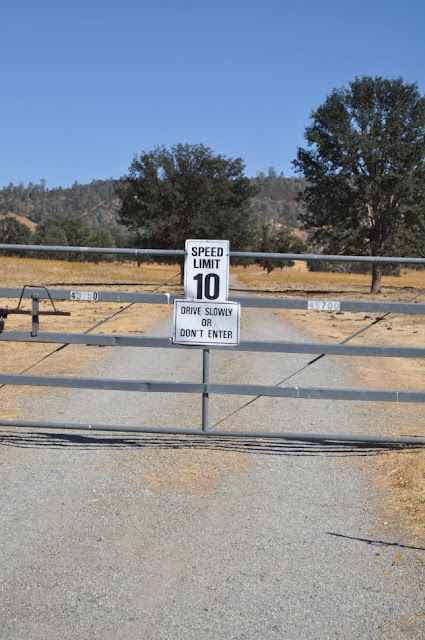 The best thing about this place was the feeling of being in the middle of nowhere, yet we were only about twenty miles from San Jose.  It had taken us nearly two hours to drive this far.   Hunger drove us onward in great anticipation. 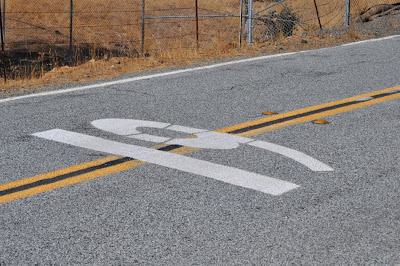 We hoped that the numbers on the road counted us down to the palce where we had decided to stop for lunch -The Junction, a Restuarant located where the Highway 130 meets the road that comes down from Livermore.  We’d seen a piece about it on the TV show, Eye On the Bay (two guys travel around the Bay Area and report back on cool things to do – I’m so jealous of their job…I reckon they need a nice Irish girl helping them to present their show – don’t you?  Actually forget the presenting – I’d happily get paid to do the research!)

But this is what greeted us last MONDAY. 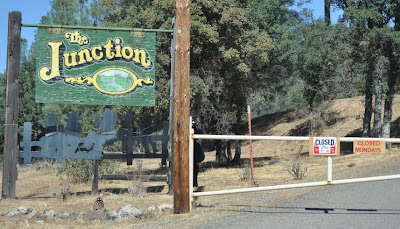 Notice the little sign with red writing on the gate.  I was so hungry I could have cried, especially when they rubbed salt into the wound with this sign. 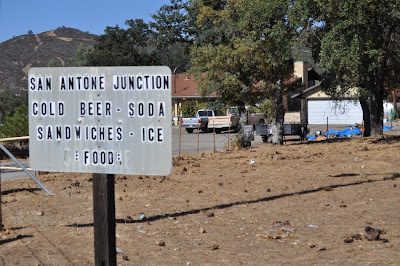 Good job we had some snacks in the car to keep us going as the road wound downward again. 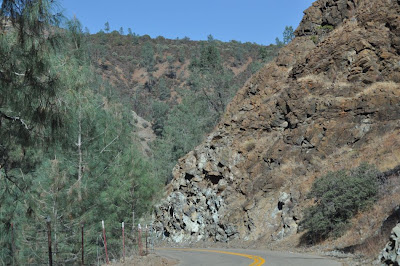 This time we were not so much terrified of falling of the edge and down the mountain, but of the mountain falling down on top of us!  Loose stone littered the side of the road, and it was hard to see what was holding up the trees that sprouted from the cliff face, left behind after the mountain had been blasted away to make the road. 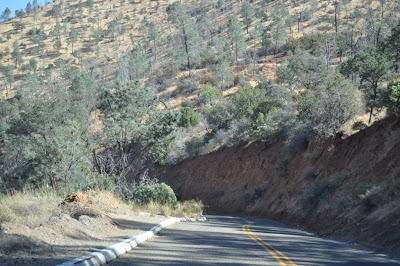 I fell in love with the little-house-on-the-prairie house.  I’m still convinced that if you went and knocked on the door, it would be opened by Laura Ingalls, with Pa in the background, his eyes watering with grateful emotion that we had taken the time to come by. 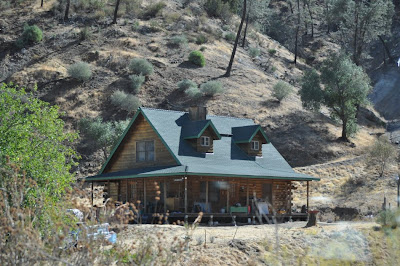 Mind you, after seeing the bullets holes on this sign we were a bit wary of even stopping the car for photos, never dropping in for a cuppa with the Ingalls! 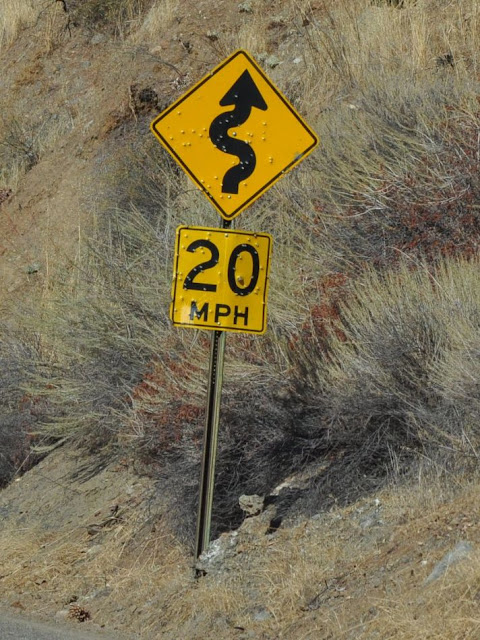 As we continued, hastily, on our way – if you can call winding down a mountain at 20MPH hasty – I couldn’t help but notice how the trees,  so abundant on the western side of the range, had given way to sparse scrub and thin grassland as we journeyed eastwards.  There really must be very little rainfall on this side of the hills. 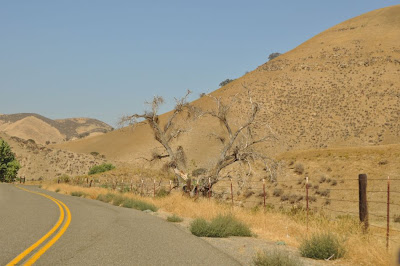 The mountain seems to swallow up the road here.  I love the way the first sign says there is a turn to the left then further along it’s changed its mind – uh oh, watch out – it’s a U turn really! 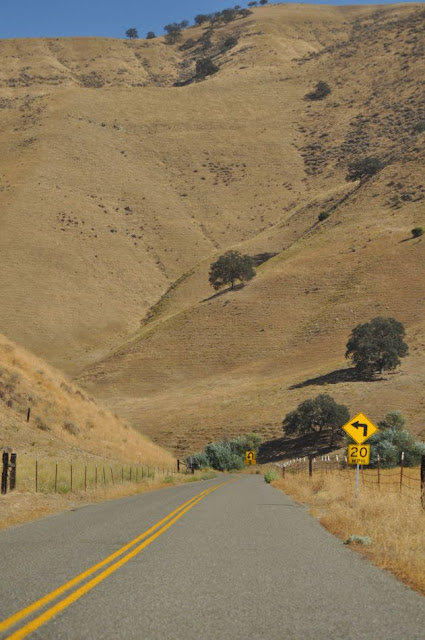 Eventually there were no more trees, and the grass was like a skim of velvet on the hills, rubbed bare in places like molting antlers on a young buck. What on earth were those poor cows eating? 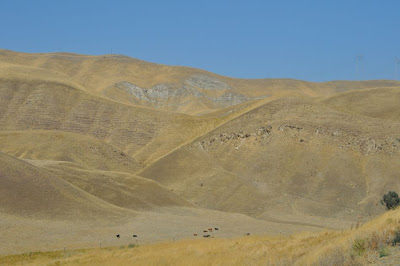 I wish I’d been a geologist like my Uncle.  He talked me out of it, saying that there was nowhere for ladies to sleep at the drilling camps and oil rigs. I was only ten at the time this conversation took place – the perfect Yuk-boys age! I now have a female friend who is a geophysist and for a long time was the only girl on board a ship of about fifty guys.  So, he did have a point, but I can’t see the hardship!  Perhaps a word from my pal would put me straight there!  Please, please – if you read this (you know who you are) share your thoughts about this in a comment!

Anyway – if I were a geologist, I might be able to explain these strange lines of scrub on the hills.  My guess is that the underlying rocks are dictating what grows above it, and they are laid down in layers, buckled and turned on their side, thus I surmise that the vegetation is following the pattern of the underlying rock formations. Am I smart or what? (Well, as a biologist I probably should know that – who’m I kidding?) 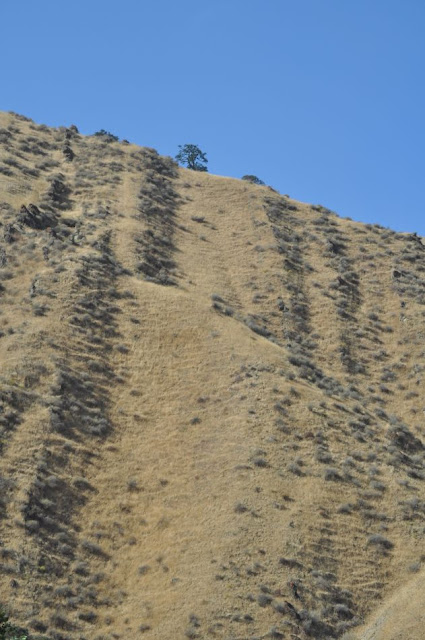 About five miles from Patterson, we saw this weird rock formation.  See the yellow lichen.  And is that a rare blue and red lichen at the bottom? 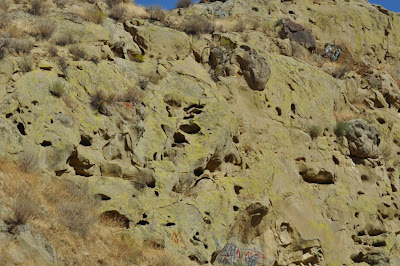 And you’d know we were within sniffing distance of a Starbucks when you see this kind of vandalism.  Or is it just a modern day form of cave drawing? We never accuse the cavemen of such antisocial behavior when we ooh and aah at million year old stick men drawings, do we? 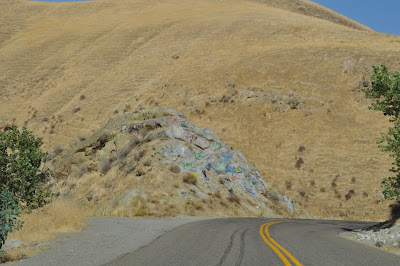 However, it seemed like a slap in the face after driving so far in pristine Old California scenery.  We slid down into the Central Valley, quickly grabbed a Subway sandwich in Patterson then hit route 33 southbound.  The Central valley was flat – as far as the eye could see… 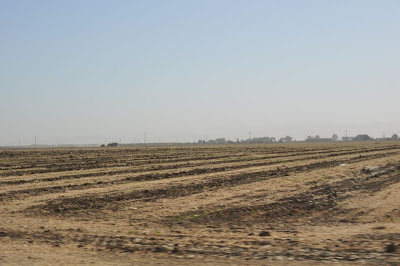 These huge irrigation canals cris-cross the Central Valley.  It is strange to see waterways looking so…so ugly…for want of a better word.  Wouldn’t it be nice to make a feature out of them rather than have these big concrete trenches? 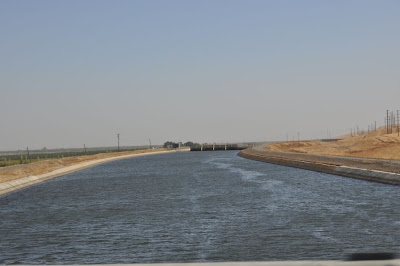 The tracks run right along the road…from a distance it looked like this train was on the road.  Gave us a bit of a start, that did! 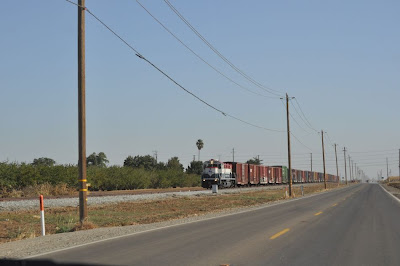 After about half an hours drive through the monotonous Central Valle,y we turned right onto highway152 to take us back over the mountains to the Santa Clara Valley.  This road is a four lane highway and much faster that the meandering Highway 130.  It was impossible to stop to take pictures, and only a few were worth posting such as the one below of how effective the fire break was in stalling the progress of this grass fire into the hills. 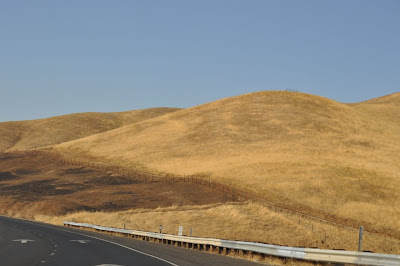 Highway 152 passes the massive San Luis Reservoir.  This is worth a day trip of it’s own…watch this space!  A swifter pace now, the scenery sped past like a fast rewind of  our trip over the mountains earlier.  We came into Gilroy, noses twitching at the smell of garlic that clings (in a quite nice way) to this town.  It reminded me of how the smell of turf smoke signals your arrival into county Donegal, back home…ummm…oh for a whiff of turf smoke!

The smell of garlic got our digestive juices flowing nicely for our arrival at Huntington Station Resturant and Sports Pub in Morgan Hill.  They have the best outdoor area I have seen here yet.  In fact, it reminds me of places I’ve visited on tropical holidays.  I love the food here, the holiday type ambiance, and the staff are amazing.  It was a lovely way to round off a pretty cool road trip.

And as it is GBBD today over at May Dreams Garden, I thoughtI’d leave you with a picture of the first of my bird of paradise that bloomed this week. 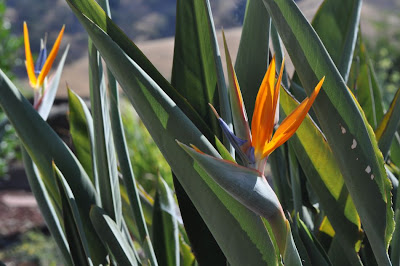 5 replies to Exploring on Columbus Day