I had to laugh when I read through my usual blogs this morning.  So many posts seemed to tie in with what I was going to write about today.  I’ve been completely obsessing about the garden this week – I mean waking up in the middle of the night worrying, bursting into tears at the dinner table, type stressing!  So when the Obsessive Neurotic Gardener  posted today to say that he did not care today,  I reckoned that I was doing his share of obsessing for him.

So what’s it all about?

Last month, in my post The birds and the bees  I had a photo of a zucchini flower that I was very proud of.  Everyone had advised me not to plant too many zucchini as I would be buried in them come harvest time, so I planted two seeds which both grew into nice seedlings which I later transplanted into the ground.  They grew well, until one one was totally annihilated by slugs. 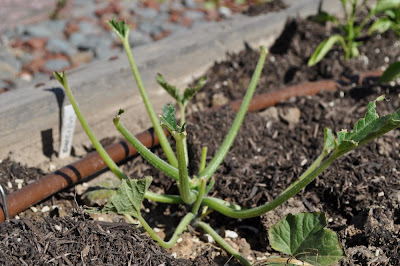 By this time, the other one had blossomed and was on its way to producing four fruit and more blossoms.  I had begun to look up recipes for zucchini dishes online!
Last Monday, disaster struck. This is all that was left of my lemon cucumbers – it is a sight that can make a grown woman weep! 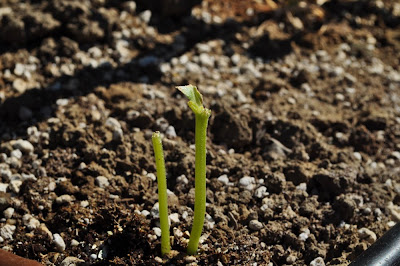 Something had nibbled at the fruit of the zucchini plant too. 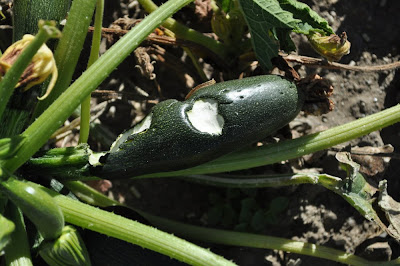 I can live with some teeth marks, but I had cause for concern when I saw that the rest of the plant was drooping. 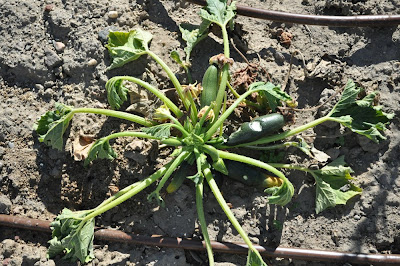 Something had eaten all the way through the stem at the base of the plant.

Distraught, I threw the plant in the compost and went to seek advice from my friend, neighbor and ace garden mentor, Al.  My husband and I thought it was too big to be slugs, thinking that it might be squirrels, but Al said “Definitely slugs – come look at what they did to my potatoes!”

Expecting to see devastation in his garden, I climbed over the fence for a look.  All I coluld say was “What are you putting on your garden?”  Everything Al grows is huge compared to mine!  Yes, a couple of his potato plants look a bit slug chewed, but wow, the rest of his garden made me green with envy!

For example, here is Al’s corn: 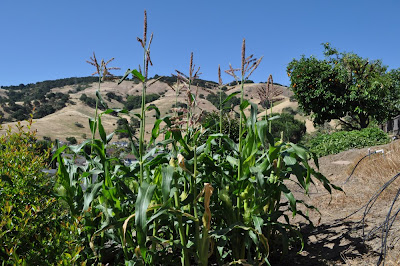 And here is mine: 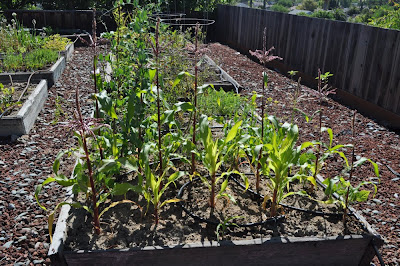 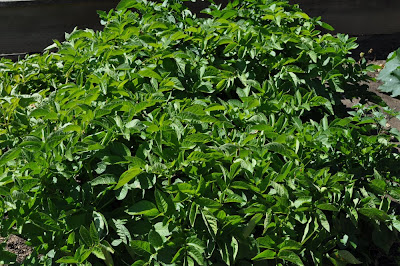 My potatoes (and me being Irish too – oh the shame!) 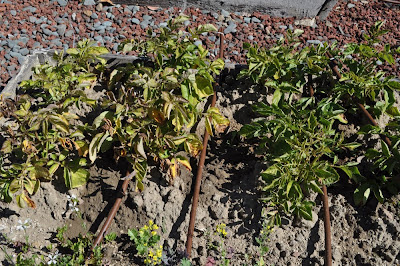 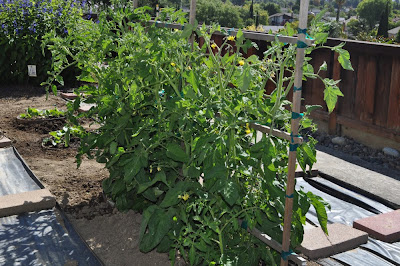 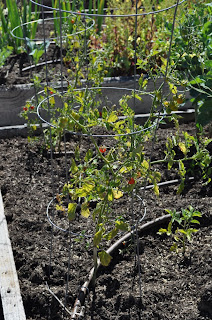 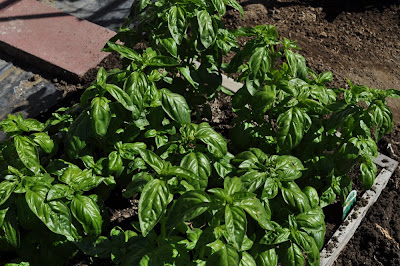 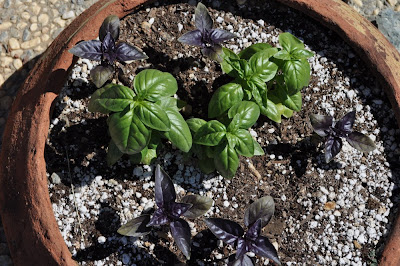 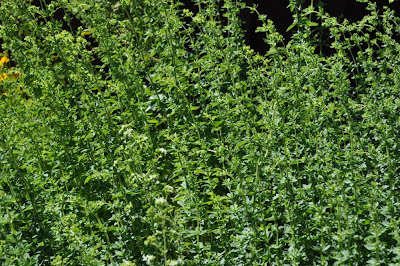 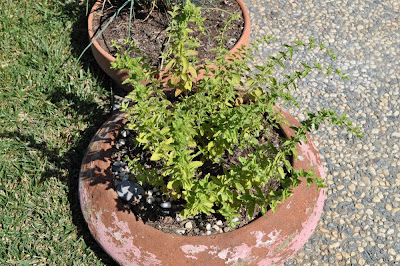 Can anyone see a pattern emerging here?

Al says he uses Miracle Grow, but I’d been told in my gardening class that it wasn’t organic.  Nevertheless, I wanted to run out and buy some – right away! But I wanted to be an organic gardener, and if I used the miracle grow would that rule out the “organicness” of my gardening?

Al also mentioned that he mulched his vegetables.  This is something I have not done, I’ve never done it before and I just never got around to doing it.  In my head I couldn’t see how it would make much difference – I figured it was just to keep the weeds down.  Since I tend to weed a little every day, did I really need to do this?  Also, if the mulch spilled over the green living plants would it hurt them?  It seemed a hassle to me…

Bottom line, Al is a talented gardener with lots of experience and a real knack for growing stuff.  I’m not going to even try to compete with him, but I do think that my veggies could do better, and so does he.

Next day, after fretting all night about should I go with miracle grow or not, then deciding that I wanted to stay in the organic camp, I went to the store to get more fertilizer.  I usually go to a smaller independent store but it was closed, so I went to Orchard Supply Hardware instead and totally interrogated the staff about which liquid fertilizers were organic, nearly afraid to believe them when they said the fish emulsion – the cheapest one on the shelf.  Coincidentally, today happens to be “Fertilizer Friday” with Tootsie Time. 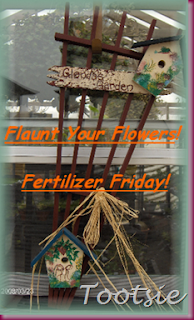 I’d never come across this before and thought it was kind of ironic after the mental torture I put myself through on  the fertilizer front this week!

In the end I decided to call the Master Gardeners hot-line to ask them two questions.

I have to say that the Master Gardeners  is a great resource.  The nice woman said that she didn’t think that the different fertilizers would cause such a difference in growth.  Then she asked me if I mulched?  When I told her I didn’t, she said that was it.  I should try mulching with compost.

She said Miracle Grow wasn’t organic and the Master Gardeners didn’t recommend it.  She couldn’t quite tell me why.  After further research, I found out that Miracle Grow is made from chemicals designed to dissolve quickly in the soil.  By no means is it poisonous, but it should be used in moderation as it can cause algal blooms in water supplies.  If you want to garden organically “by the book” then don’t use it.

So, I opened up the bottom of my compost heap to get some mulch.  All those slugs and snails that I sent to “jail” there blinked their eyes at the invasion of the harsh sunlight – these were the culprits who ate my plants.  No more Mrs Nice Gal, I squashed every one I saw and came back last night with a torch to finish the job.  I suppose you could say I broke the Peas Treaty.

With only enough home made compost for one plot, Al took me to get more organic compost.  Bless him – he’s the best neighbor a gal could have!  He even lent me his wheel barrow, and I set to with the mulching. 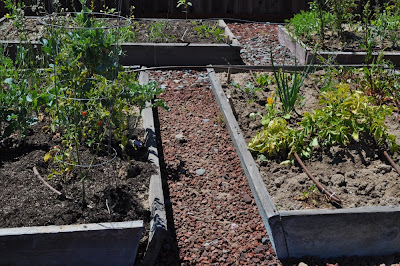 The plot in the background has been mulched with the compost we made, the left with the shop bought stuff and the one on the right has yet to be done.  It makes the plants look really nice! 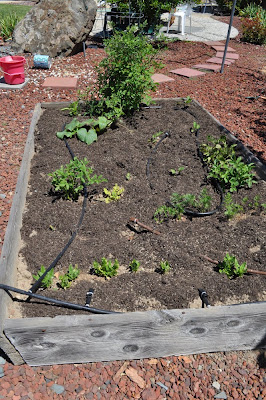 Growing in this plot, from the back forward are, tomatoes, pickling cucumber (from Judy in the gardening club), tiny eggplants, two potato plants, one left over turnip, carrots and spinach from last fall that is only now beginning to bolt!

Whilst my garden is sparse looking, I need to remind myself that it is the first year of gardening in the Californian climate, and as my husband pointed out, (as he tried to console me when I cried at dinner the other night about my veggies not growing! What a saddo!) we are eating from the garden on a continual basis, getting a dinner at least every second night.

As I dug up potatoes last night, I wondered if Katie Scarlette O Hara saw my garden would she be very convinced that she’d “never go hungry again” were she depending on it?  Still, we had ample for the two of us for last nights dinner. 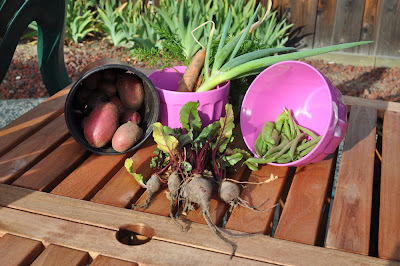 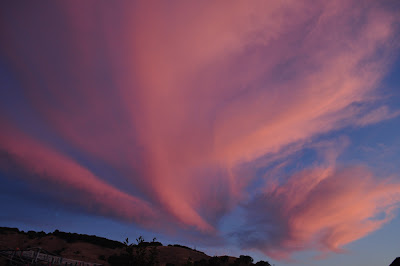 15 replies to Mulch ado about nothing